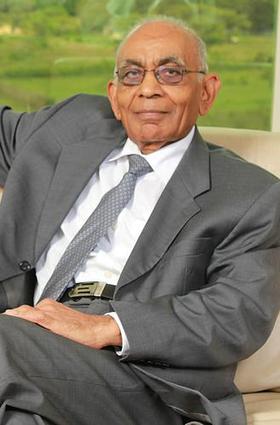 Bhimji Depar Shah founded Bidco Industries in 1970 to manufacture garments. In 1985, the company ventured into soap production and in 1991, launched an edible oil manufacturing plant in Thika, an industrial town northeast of Nairobi. Today, Bidco is one of the largest manufacturers of edible oils in Tanzania. The company also produces detergents, soaps and baking powder, grossing over $500 million in annual revenues. Bidco is the market leader in Kenya; its products are sold in 13 African countries. Bhimji’s son Vimal Shah serves as CEO.

Bhimji is the father of Bidco Oil CEO Vimal Shah, who was listed last year with a family net worth $1.6 billion (Sh144 billion). Merali and Bhimji have one thing in common. They are Kenyans of Indian origin. The Indian population in Kenya is estimated to be about 100,000. Many of them, just like Bhimji and Merali, are founders and chief executives of some of the most successful businesses.

They are in the manufacturing, engineering, medicine, retail and wholesale, technology, construction, hospitality, banking, and insurance sectors. Some of the billionaires are business magnates Comcraft Group chairman Manu Chandaria, Pradeep Paunrana of Athi River Mining, Bharat Thakrar of Scangroup, Nakumatt’s Atul Shah, among others.

But what makes most of them so successful? Analysts and some of these entrepreneurs say it is their education, strong family values, networks, financial management and philanthropy.

Most Indians believe education is the best way to beat poverty and hardship. They also believe the socially acceptable norm is to become a doctor, engineer, or businessperson. They emphasized on either learning science or math or becoming an entrepreneur.

Indians immigrants found that one of the secrets to success was to learn from those who had paved the trails. Successful Indian technologists in Silicon Valley formed an organisation called The Indus Entrepreneurs to mentor other entrepreneurs and provide a forum for networking. TiE is reputed to have helped launch hundreds of startups, some of which achieved billions in market capitalisation.

Kamal Budhabatti, founder and CEO, Craft Silicon, a technology firm agrees that most of them have an edge since they are from a business oriented family. Kamal, from a data entry job to starting his company with offices in India, Nigeria and the US, this growth is a reflection of that entrepreneurial spark in many of companies founded by Indians in the Diaspora.

“Majority of us grew up with parents running businesses and starting yours is the ultimate goal for majority of young children from India,” he says. Kamal says their penchant to courses such as engineering and medicine gives them an edge to start their own companies.

Studies have established that family or business networks by Indians in the Diaspora have phenomenally boosted success chances for these businesses.

In The Face of Success in a five part series, Vivek Wadhwa notes that Indian immigrants formed networking organisations to teach others about starting businesses, and to bring people together. Wadhwa, is a fellow, Arthur & Toni Rembe Rock Center for Corporate Governance at Stanford University. One such classic example of networking is in the Silicon Valley, following their success at setting successful companies. The first few Indian immigrants who cracked the glass ceiling had open discussions about the hurdles they had faced.

“Indians agreed that the key to uplifting their community, and fostering more entrepreneurship in general, was to teach and mentor the next generation of entrepreneurs,” he argues.

As a consequence, the Indian networking organisations learned the rules of engagement of Silicon Valley and mastered these. They built organisations and created a US ecosystem of successful Indian entrepreneurs – and, crucially, angel funders to accelerate newcomers.

According to theological thought, Indians are successful because they give to the needy. This generosity is often to ensure their rebirth, or reincarnation, is bearable. Hindus believe those that do good will be (re)born good, and vice versa.

Christians believe God cannot be in debt, and any good deed done for the poor will be repaid. Therefore, their success is pegged to their philanthropy. And if you think about it, it makes sense.

Asians of note, such as Manu Chandaria, Naushad Merali and Vimal Shah, are among Kenya’s top philanthropists, giving massive donations to support education and health development in the country.

Dr XN Iraki, lecturer, University of Nairobi, School of Business says in his last week’s column in Business Beat for an economy to grow, we cannot ignore family values and responsibilities. He says they are a better predictor of economic success than discovery of oil or gas. “The success behind Asians, both in their countries and as immigrants, is buttressed on values such as responsibility and caring for one another. The rise of China, Japan and Korea has something “family” in them.”

For others however, they split a few years by overestimating their potential to succeed on their own only for the business to fail sooner, Obara states.

“Indian immigrants have the confidence and trust of each other to take good care of the investment and see it work,” notes Obara. The culture they have grown up with, he argues, is one of assisting one another and cannot afford to be divided like other communities in Kenya.

While other communities are oriented to look for white jobs and think about business as the last resort, an Indian immigrant thinks about business as the way to go. Obara notes: “Our orientation mostly resonates around books and academics with no practical engagement in business for the young generation.”

Besides, the burgeoning Indian population has piled pressure on the available resources such as land hence creating a strain. And for those who leave behind hearth and home, often fleeing hunger and poverty, the drive to succeed is strong.

Henry Bwisa, professor of entrepreneurship at the Jomo Kenyatta of Agriculture and Technology points at these precipitate events as the necessity for invention hence their entrepreneurial spirit. Bwisa draws parallels that the same is bound to happen for any community whose resources are getting scarce by the day.

“The Kisii community is for example the upcoming most enterprising people in Kenya due to scarcity of land back at home, which in itself is a hardship.” – standardmedia.co.ke

Bhimji Depar Shah founded Bidco Industries in 1970 to manufacture garments. In 1985, the company ventured into soap production and in 1991, launched an edible oil manufacturing plant in Thika, an industrial town northeast of Nairobi. Today, Bidco is one of the largest manufacturers of edible oils in Tanzania. The company also produces detergents, soaps