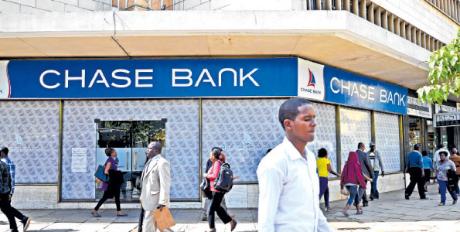 KCB Group risked losing Sh1 billion it lent a customer in the form of trade credit guaranteed by Chase Bank, an investment bank said in a report that offers new insights into why Kenya’s biggest bank entered the takeover race for the troubled lender.

The report seen by the Business Dailyindicates that KCB had disbursed the money through letters of credit (normally given to businesspeople as trade loans) to a customer with guarantees from Chase Bank.

While 60 per cent of the exposure (Sh600 million) matured and was paid two days after the bank went into receivership, KCB is said to have been closely watching whether the customer would pay the remaining Sh400 million.

Failure to do so would force KCB to make loan loss provisions that would eat deeply into its profits.

“We had Sh1 billion in off-balance-sheet exposure to Chase via letters of credit (LC) but 60 per cent of this matured two days after the bank was put in receivership, with no call on the guarantees,” Renaissance Capital, an investment bank, said quoting a senior KCB manager.

Commercial banks are usually exposed to each other in the form of such guarantees, in the interbank markets, horizontal repos, cheques, deposits, among other things.

When the exposures are big and extend over many institutions, they pose a systemic risk to the entire industry. Any off-balance-sheet exposure means the risk is not factored in publicly available accounts.

“It [KCB] has Sh400 million in outstanding off-balance-sheet exposures, which management is watching closely, as a call on this will depend on Chase customer first defaulting followed by Chase Bank’s own failure to satisfy the cash call under the LC guarantee requirements,” said Rencap.

KCB management had not responded to our questions by the time of going to press.

Recap said the KCB management remained cautious about the Chase Bank acquisition, insisting it will not commit any money until it completes due diligence. Any liquidity needed in the near term will come from either the CBK or Chase’s internal funds.

“It is important to highlight that KCB has simply been appointed as manager and none of its funds or capital will be committed to Chase during this period. Any liquidity requirements of Chase will be sourced from Chase’s internal funds or from CBK funds,” said Rencap.

KCB is expected to act as the Chase Bank manager as it conducts due diligence alongside the planned reopening of the troubled lender next Wednesday. KCB expects to be paid a management fee, which will presumably cease on the day it firms up the acquisition.

The amount to be paid to KCB is, however, still not public.

Rencap further notes that it is unlikely that KCB will acquire Chase Bank for anything more than its book value, which stood at Sh11.1 billion (or Sh5.6 billion for a 51 per cent stake) after its financial statements were restated and accompanied by a qualified opinion from its auditors.

“Considering the bank’s financial year 2015 loss, receivership status and erosion in franchise value, our best-case valuation of the bank would be book value equivalent, with a fair price being anything below that level, in our view,” said Rencap.

Given that the auditor disclaimed an opinion on the financial statements and accounts, the fuller picture will only be known definitively after due diligence.

The auditor effectively said that they were not sure whether what the books say is indeed what exists in fact.

Standard Investment Bank (SIB) said KCB is likely to insist on significant provisions in the collapsed Chase Bank’s bad and doubtful loans to make the most from the purchase price and minimise its exposure to historical transactions, especially where loan recoverability is questionable.

KCB has proposed to buy a majority stake in Chase Bank that went belly up on April 7 following a run that saw depositors remove Sh8 billion in a single day.

“In a typical transaction, to mitigate their exposure to historical transactions, the acquiring party pushes for higher provisions/write-offs, which results in reduction of the purchase price,” said SIB.

SIB also noted that if the amounts in question are not fully recoverable, it would mean other Chase Bank shareholders, who are not directly at fault, will be facing a lower sale price.

Due to the possible disagreements on the potential loan losses, negotiations for the majority stake are likely to be complicated.

“We expect purchase price determination to be complicated by the fact that some of the irregularly obtained loans were allegedly made to Chase Bank’s directors who most likely double up as shareholders,” said SIB.

One of the fears that KCB may exhibit is the possible fall in the return on equity should it have to cover the entire risk-weighted assets, a good part of which is nonperforming.

“Depending on how much stake KCB acquires, upon consolidation, from a capital adequacy perspective KCB Group would bear the burden of covering for 100 per cent of Chase banks’ risk-weighted assets – this is likely to depress KCB Group’s ROE (return on equity),” said SIB.

Revealed: KCB’s Sh1bn exposure in Chase Bank KCB Group risked losing Sh1 billion it lent a customer in the form of trade credit guaranteed by Chase Bank, an investment bank said in a report that offers new insights into why Kenya’s biggest bank entered the takeover race for the troubled lender. The report seen by