by samrack
in Africa, Diaspora, Kenya, Kenya Diaspora News, News, People
A A
0

The remains of 36 Kenyans who perished in the March 10 Ethiopian Airlines flight 302 were expected in Nairobi on Monday morning.

The Ministry of Foreign Affairs said the plane repatriating the remains was scheduled to land at the Jomo Kenyatta International Airport (JKIA) at 10.25 am.

Representatives of the affected families will accompany the remains from Addis Ababa Ethiopia, in what will be a private event after they asked the government to lock out the media from the airport.

The International Police Incident Response Team identified all the 157 persons on board the ill-fated plane that crashed on March 10, six minutes after takeoff from Addis enroute to Nairobi.

Boeing, the plane’s manufacturer has already offered compensation packages to the affected families.

United States plane manufacturer Boeing on September announced it had rolled out a Sh5 billion Financial Assistance Fund to compensate families that lost their loved ones in two plane crashes involving its 737 MAX aircraft, the recent being Ethiopian Airlines flight 302. 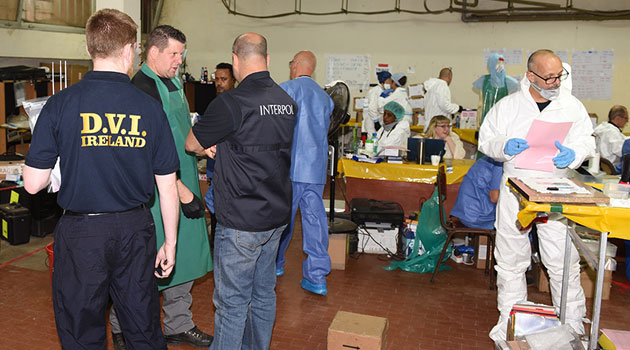 INTERPOL’s Special Representative Office at the African Union headquarters in Addis Ababa coordinated the process of identifying remains of the crash victims following a request by Ethiopian authorities, two days after the ET302 crash/INTERPOL

The Chicago-based multinational through administrators – Kenneth R. Feinberg and Camille S. Biros – is set to give each family representing 346 victims $144,500 from the $50 million fund, translating to Sh15 million per family.

Tags: Remains of 36 Kenyans who perished in Ehiopia air crash due in Nairobi
Previous Post