Reliability of pollster that put Raila ahead was questioned in US 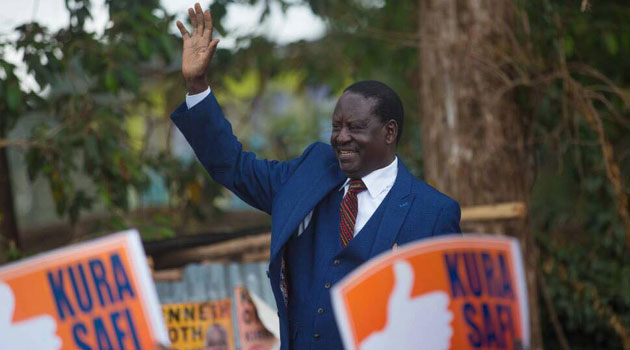 The firm headed by an American pollster, author and public speaker, John Zogby, has had an average percentage error of 1.3 with a similar bias including in the 2012 US presidential election polls/FILE

Reliability of pollster that put Raila ahead was questioned in US

It has emerged that Zogby, an opinion firm contracted by the National Super Alliance (NASA) to conduct a survey between July 8 and 13 has had a history of questionable opinion polls.

The firm headed by an American pollster, author and public speaker, John Zogby, has had an average percentage error of 1.3 with a similar bias including in the 2012 US presidential election polls.

Basing its findings on telephone interviews as well as Internet-based surveys, Zogby polls have been described as largely misleading with accusations of “herding” – a concept where fictitious opinion poll findings are changed to appear to be in conformity with other leading polling firms – being levelled against it of numerous occasions.

On October 28, 2012 for instance, Zogby also known as JZ analytics gave Republican presidential candidate Mitt Romney a three per cent lead (48 per cent) ahead of Barack Obama (Democrat), who according to the poll would lose the election with 45 per cent.

At the time, the pollster indicated that its poll had a margin of error of +/- 3.1 despite firms such as the Associated Press giving Obama a 15 point lead (52 per cent) compared to Romney’s 37 per cent.

A poll jointly commissioned by Ipsos and Reuters at the time gave Obama yet another commanding lead of 12 percentage points, garnering 51 per cent compared to his opponent’s 39 per cent.

Three weeks to the General Election in Kenya, Zogby published findings of its telephone survey Wednesday giving Raila Odinga a one-point lead over President Uhuru Kenyatta, the Opposition chief placed at 47.4 per cent against Kenyatta’s 46.7.

According to Zogby, the survey commissioned by NASA had 2,983 people sampled in what he said were face-to-face interviews conducted in all the 47 counties.

With a margin of error of +/- 2, the poll leader exuded confidence in the accuracy of the survey which he said was anchored on the science of opinion polling, disputing that the survey was influenced by its clients.

“I took part in this project from start to finish and can say unequivocally that the work is first-rate,” the Star Newspaper which published a survey placing President Kenyatta ahead of Odinga, quoted him on Wednesday.

The authenticity of Zogby polls has also been put to question with its sampling method said to be coercive as opposed to random sampling.

On Thursday, just as the Court of Appeal was making a ruling on a challenge by the electoral agency to a High Court decision directing it to re-tender for presidential ballots, Odinga held a press conference at his Nairobi office where he claimed that a poll conducted by the National Intelligence Service projected a 70 per cent lead for his bid in the August 8 poll.

Odinga claimed that as a result of the poll, the National Police Service was being mobilized to tamper with the “eminent and tragic Raila win.”

“The Jubilee Party strategy team had recommenced among other things, the use of police officers as polling officials,” he claimed.

The claims by the opposition chief coincided with a ruling by the appellate court setting aside orders directing the electoral commission to tender afresh for presidential ballots.

While reading the verdict penned by a five-judge bench, Justice Erastus Githinji said the orders by the lower court failed to take into consideration statutory timelines for procurement which would be violated in the event IEBC is compelled to tender anew.

“The court erred in grating the orders without due weight and consideration of public interests and statutory regulated timelines,” Justice Githinji stated.

The Court of Appeal however held that the High Court did not err in its findings that the poll body did not conduct adequate public participation while sourcing for a ballot paper printer.

It however noted that the lower court failed to consider unique circumstances under which public participation is not mandatory.

Also dismissed was a counter appeal by NASA seeking the review of the High Court’s findings that the alliance had failed to prove improper links between President Uhuru Kenyatta and ballot printing firm, Al Ghurair.

NASA had among other things while challenging the award of Sh2.5 billion ballot printing tender to the Dubai-based firm submitted to the court that one Mr Majid Saif Al Ghurair who it claimed owned the printer pitched for the award of the tender when he led a Dubai Chamber of Commerce delegation in paying a courtesy call to President Kenyatta at State House late last year.

Reliability of pollster that put Raila ahead was questioned in US Reviewed by samrack on July 20, 2017 .

The firm headed by an American pollster, author and public speaker, John Zogby, has had an average percentage error of 1.3 with a similar bias including in the 2012 US presidential election polls/FILE Reliability of pollster that put Raila ahead was questioned in US It has emerged that Zogby, an opinion firm contracted by the