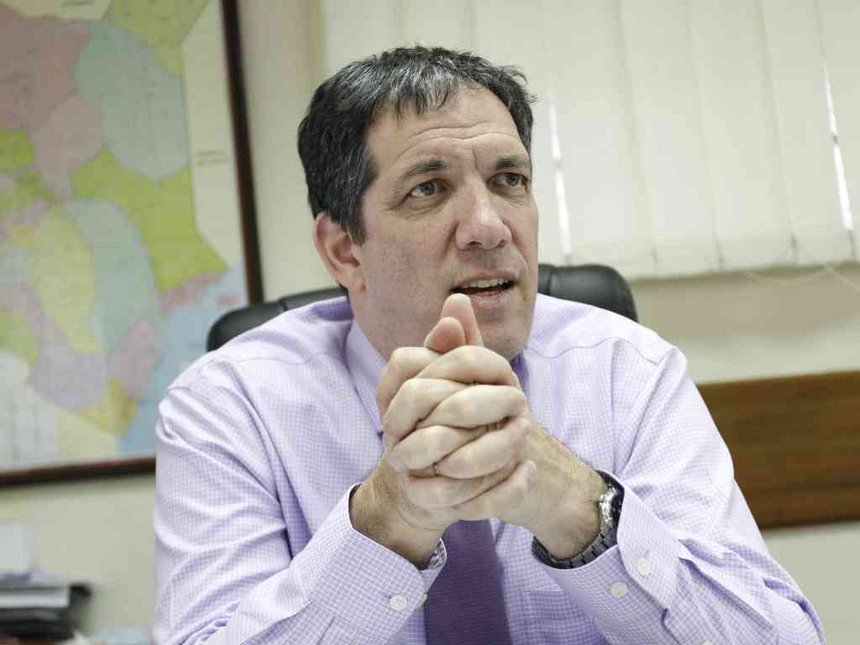 Israel ambassador to Kenya Yahel Vilan during an interview at the embassy on Tuesday. Photo/Monicah Mwangi

resident Uhuru Kenyatta visited Israel earlier this year and now the Israel Prime Minister Benjamin Netanyahu is coming to Kenya today. The Israel ambassador to Kenya Yahel Vilan gives a preview of the visit and why it’s important to both countries.

Please give us a brief on the visit by PM Benjamin Netanyahu to Kenya?

The Prime Minister will arrive in Kenya on Monday, July 4. He will be coming from Entebbe, Uganda where he will attend the 40th anniversary of the Entebbe Raid where, as you may know, his brother was killed as the commander of the Israeli troops. So that will be the first stop in his four-country African tour. Kenya will be the second stop, then Kigali, Rwanda and finally, Addis Ababa, Ethiopia.

What is the significance of this visit?

Closing the gap between our great relations. Of course we had a very successful visit of President Kenyatta to Israel in March but this will be the first official visit by the Prime Minister of Israel to Africa in more than 30 years. This of course without taking into consideraton the short stop-over by PM Yitzhak Rabin at JKIA in 1994. President Moi also came to Israel in 1994. This visit is very important because it reflects the importance the current prime minister and the government of Israel is attaching to Kenya and Africa in general. The Prime Minister will be accompanied by a delegation of 50 companies from various fields including agriculture, water, security and ICT. We believe there is an opportunity for Israel and Kenya to strengthen commercial relations.

Is the PM expected to launch any projects or visit some of the projects Israeli companies are involved in?

We were thinking of visiting the Galana irrigation project but due to time constraints – as he will be here for one day only – he will not be able to visit. However, Galana will be very high on the agenda as its the heart of the bilateral cooperation. As you may know, when President Kenyatta was in Israel, the two of them signed a declaration on water issues. During this visit, the two leaders will announce the establishment of a training centre on water and irrigation supported by Israel at the Kenya Water Institute in South C, Nairobi.

Another project where we hope to sign an MoU is establishing a Kibbutz model (where locals live and work together in a farm on a non-competitive basis) in the areas of Galana handled by the Israeli company and the Ministry of Water. This probably will be signed and announced during the visit.

In 2009 and 2014, Foreign Minister Avigdor Liberman visited and signed a series of political, economic

and development agreements. What’s your response to talk that they are just for Israel’s own security and diplomatic needs?

I honestly believe diplomacy is a two-way street. I don’t see any scenario where one country is benefiting while the other is not. Especially if I scrutinise our relations. We should have more Israeli businesses coming to Kenya and more Kenyan products exported to Israel. For instance, an Israeli factory is being established here for post-harvest of avocados and flowers. This is an investment that creates employment and earns revenue for Kenya. We have many other projects including an eleventh month programme where we take 50 people from Galana and another 50 from the general public and train them on courses focusing on agriculture, education and women empowerment and gender issues.

We also work together with women on empowerment and gender issues at a centre in Kenyatta University. As we speak, we have four teams of Israelis in Kenya. Two teams are working with youth in Kiambu on vocational training on how to be more equipped in terms of looking for jobs.

On request from Kenya, we have an expert here in Nairobi dealing with disaster management. The other two teams are in Kisumu where there is a big, two-year project on aquaculture and another one on water issues.

Your country seems to attach very strong importance to the help Kenya gave during the Entebbe raid.

Our relations go way back and are based on a very strong foundation. One of these is the friendship that these two countries gave each other in times of need especially the 40th anniversary of the Entebbe Raid which we all remember and cherish the support of Kenya. Without Kenya’s support to us that night of July 4, 1976 – that operation would never have been a success. In the same manner, Israel has always been the first to extend support to Kenya during terror attacks like 1998 bombing and Westgate terror attack three years ago and others. So this is the first pillar of cooperation. The second one, which is very important, is that we have a lot in common.

Israel has established itself as a world power in many fields, which are Kenya’s major challenges. They range from security to food security, agricultural technologies and water technologies. We do work together to find solutions to challenges. I think the sky is the limit for what we can do and shall do together.

Israel has not regained its observer status at the African Union since 2002 yet Palestine was granted the status in 2013 allowing Palestinian Authority President Mahmoud Abbas to address the AU. Your leaders say this has led to anti-Israel resolutions being

passed, with Israel not having the ability to get its voice heard. Is your government lobbying for reinstatement?

Israel lost its status observer and definitely this is one of the topics that will be put on the agenda of the PM’s visit to Africa. We think and know we have a lot of support from our African friends on this matter. But with the scope of relations between Israel and this continent, there is no reason whatsoever that we cannot gain back this status of observer in the AU which was taken from Israel as a result of a political decision by Libya at the time in 2002 if I am not mistaken.

Both Kenya and Israel face a constant threat of terrorism. What can we learn from Israel’s experience?

I am not an expert on counter-terrorism and if I was one I wouldn’t give my advice to the Kenyan public through the media. I think we have the channels to talk to each other and to share experience in counter terrorism. But you know terrorism today is global. It’s just like the weather. You cannot fight it only in Kenya. If there is rain in Somalia, it will come to Kenya and if it is there in Uganda the same – terrorism is global. No country by itself can defeat terrorism. Many countries – Kenya and Israel included – can do better by themselves domestically. But still you must have this cooperation with other countries, for instance in sharing intelligence, experiences, technologies and so on.

On security, we strongly believe we can cooperate with our friends in this continent again within three layers. One is to share our experiences. Two, it’s part of our own security. Many of the weapons smuggled to our region are coming from or through Africa, definitely not Kenya. But it can be from Sudan and other parts. So this sharing of cooperation is crucial. Third, this is a global war and we need each other because the world is becoming a global village and terrorists are taking advantage of the non-borders. So we need this social network and also cooperation in banking, including the transfer of money.

The good guys, those who are fighting terrorism, must have the same level of cooperation.

Kenya plans to erect a wall with Somalia. What’s your experience with the multiple security fences in Israel?

We have many security fences including on our Sinai border with Egypt and Gaza. Each of our fences is different and we call them smart fences because of the different technologies used. All these fences are working 100 per cent. You cannot compare what Israel looked like and dealt with, for example from the

West Bank, before and after the fence. We went to an operation in the West Bank the last time in 2002 because there were waves of terror and there was no fence. Without the fence, the time it took for a terrorist to leave his house, let’s say in Ramallah, and enter Israel with the explosive belt was 15 to 20 minutes. Or half an hour if he was asked some questions at check points or if he didn’t he couldn’t choose which entry was best to enter Israel from.

We had attacks in our cities on a weekly basis. But now with the fence, it’s narrowed to almost zero. It has become difficult for them to penetrate Israel. Fences in whichever form are an effective security barrier.

What happened to the planned direct flights to Israel with Kenya Airways?

We are still working on it as KQ had promised to fly during the foreign ministers visit in 2014 but due to their financial crisis, they have not started. From what I heard, they will evaluate the policy in the next three to four months. In the meantime we are working to resume Arkia Airlines flights to Kenya.

This was the company that was attacked by missiles in Mombasa in 2002. They have expressed that they want to resume the direct flights from Tel Aviv to Mombasa and we got the blessing and greenlight from the Ministry of Transport here.

So we are looking forward for it to start before the end of the year.

Reasons behind 1st Visit From Israel PM Reviewed by samrack on July 4, 2016 .