Raila: Why I made a pact with Uhuru 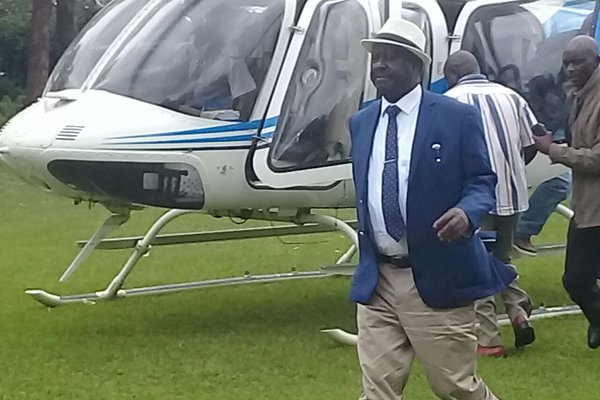 Raila: Why I made a pact with Uhuru

Opposition leader Raila Odinga on Friday urged his supporters to support dialogue that he and President Uhuru Kenyatta agreed on.

Mr Odinga and Mr Kenyatta met last week and pledged to work together for the good of Kenyans.

He dismissed claims that his agreement with President Uhuru Kenyatta meant he had crossed over to the ruling Jubilee party.

In a series of rallies, Mr Odinga told his audience there was a distinction between Nasa, his coalition, and Jubilee.

But he argued he had chosen dialogue with the President because the country needed a different path to resolve historical injustices.

“Nasa has not joined Jubilee. Nasa is still strong. It is me who went to meet with (President) Uhuru Kenyatta for the sake of Kenya,” he told a crowd at Oyugis Town in Homa Bay County.

“I spoke to him because he is the President of Kenya, and I am the people’s president, not so? So we needed to end the injustices in our country and take Kenya forward,” he spoke in Dholuo, his mother tongue.

“I have heard there are those complaining about the unity in Nasa. Nasa is Nasa. Jubilee is Jubilee. We are different. Our coalition is united and strong.”

Earlier at Kisii Sports Club where he met MCAs and other leaders from Kisii County, Mr Odinga said he had to swallow his pride and sit down with President Kenyatta to sign an agreement.

He added that his decision was based on “serious soul-searching” about the problems citizens are facing.

“We are going to make a formal trip to Kisii and other counties with the Head of State.

“We have not spoken publicly since we signed the MoU. We agreed with Mr Kenyatta to wait and see how the country reacts to its contents.

“That’s why the President together with the people’s President have not spoken,” Mr Odinga said.

While addressing a section of Kisii leaders, among them Governor James Ongwae, his deputy Joash Maangi, Senator Sam Ongeri, MCAs and Dagoretti North MP Simba Arati, Mr Odinga said Kenya had witnessed bloodshed for long and it had to end.

“We have been seeing blood all the time. From 2007 to date. At least 350 innocent lives have been lost in our country since August 8,” he said.

Mr Odinga said he believes the pact was the beginning of healing in Kenya.

The ODM leader said that for years, citizens have waited for the Kenya that our founding fathers envisioned.

It is the first time Mr Odinga was responding to questions over his shaking hands with President Kenyatta at Harambee House.

The move followed months of strained relations with the ruling Jubilee, which was punctuated with him refusing to recognise President Kenyatta’s victory in the October 26, 2017 repeat election that Nasa boycotted.

But that handshake was quickly renounced by his principals in the coalition, who argued they were unaware of the dialogue.

At the same time, senators from Mr Odinga’s ODM Party have asked the Senate to replace Mr Wetang’ula as Minority Leader.

Mr Odinga urged his supporters to support the dialogue. He said Nasa was united.

“It is normal for a house with many wives to have quarrels time and again,” he said.

“We are not divided. We are more than united and the other Nasa principals are going nowhere,” he said.

Addressing mourners at the burial of Prof Alloys Tumbo-Oeri in Bogeka Village, Kisii County, Mr Odinga the journey to Canaan is now ripe.

Mr Odinga, who was with Senate Speaker Kenneth Lusaka and a host of local leaders among them Governor Ongwae and Senator Ongeri, said the unity talks between him and President Uhuru Kenyatta were not about Jubilee and Nasa but about Kenya.

“The reason why it is me and Uhuru is because it is about the future of Kenya,” he said.

Mr Odinga added that the National Anthem sets the direction Kenya should follow.

“It tells us to be God-fearing, justice be our defender, may we dwell in peace and liberty, and may plenty be found in our borders,” he said.

“We (he and Uhuru) asked ourselves: Where did we go wrong? What kind of nation do we want to build? What kind of legacy would we gift the future generation?” said Mr Odinga.

Kenya, he said, has become a country where you are judged by your name such that even when looking for a job, your name could be an advantage or could get you disqualified.

“That’s why I agreed on behalf of the millions of Kenyans that I represent to sit down with Mr Kenyatta face-to-face and tell them time has come to bring these to an end. That’s why the MoU is called building bridges,” Mr Odinga said.

He said inclusivity, ethnicity, poverty, elections, corruption and security are all addressed in the MoU.

Mr Odinga said that if the issues are addressed, “then we can lay a firm foundation to achieve the Kenyan dream and this must include all the 44 different ethnic communities in our country.”

At Kondele in Kisumu, Mr Odinga told the crowd he and the President would work on national unity and ensure political differences do not polarise the country.

He said all Kenyans arrested after he took ‘oath’ would be released and the charges dropped. Those who were injured by police during elections would be compensated, voided passports would be returned and Nasa leaders’ gun licences reinstated.

Mr Odinga said NRM ‘general’ Miguna Miguna would be allowed back into the country following his controversial deportation.

He said that despite the differences among Nasa leaders, they were still united and the co-principals would remain in the coalition.

Earlier, Mr Odinga addressed a gathering in Ahero where he urged the public to embrace his pact with the Head of State.

Share thisFacebookTwitterPinterestEmailWhatsAppNasa leader Raila Odinga arrives in Kisii County for a meeting with Kisii leaders on March 16, 2018. PHOTO | RUTH MBULA | NATION MEDIA GROUP Raila: Why I made a pact with Uhuru Opposition leader Raila Odinga on Friday urged his supporters to support dialogue that he and President Uhuru Kenyatta agreed on.