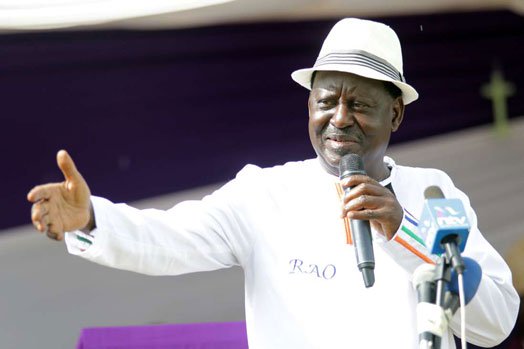 Nasa presidential candidate Raila Odinga has made a passionate appeal to his supporters to desist from violence and damaging property during the anti-IEBC demonstrations.

Mr Odinga said it was wrong to light bonfires on roads and disrupt public transport and other essential service in the push for reforms at the Independent Electoral and Boundaries Commission (IEBC).

Mr Odinga spoke a day after a group of youths broke away from those demonstrating in Kisumu town and looted Tumaini Supermarket on Friday.

There have been ugly incidents of violence in Kisumu and the neigbouring towns of Siaya, Homa Bay, Bondo and Migori in the last two week during the protests.

Speaking on a video link to a group of church leaders at the St Stephen’s ACK Kisumu on Saturday, Raila said the demonstrations must continue until Nasa’s demands are met.

The opposition has been holding protests to push for changes in the IEBC that it believes will level the playing ground in the repeat presidential election.

While recognising the fundamental rights of Kenyans to picket, the opposition chief clarified that the right to do so does not extend to looting and destroying property.

”I beseech our people with all kindness and humility to desist from acts of hooliganism that may undermine the tenets of democracy that we are fighting for,” Odinga asserted.

He asked the clerics to spread the gospel of peaceful demonstrations across Nyanza, especially where there have been violent confrontations with the police.