Raila to face court battles as he names Eurobond “Officials” 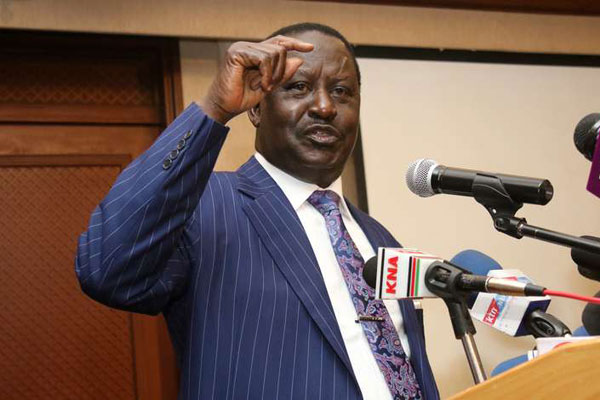 Opposition leader Raila Odinga has named senior government officials he says should explain the mystery behind the missing Eurobond billions, setting the stage for court battles.

Mr Odinga had promised to name individuals he claimed had stolen the money instead of channelling it to development projects.

Mr Nyaoga, has already threatened to sue Mr Odinga for linking him to the missing billions, saying maybe Mr Odinga confused his name with that of Mr Gerald Nyaoma, who he said was involved in the Eurobond negotiations.

Mr Nyaoga said he had no involvement with the Eurobond, arguing that the “allegations constitute reckless impunity and is a serious affront on my character and I will be taking action so that I can vindicate my character”.

“I am going to sue because I have built my profession for over 31 years, so how can somebody with a microphone wash it away in five minutes,” said Mr Nyaoga shortly after his name was mentioned.

In his defence, Mr Kinyua, through a statement, said he was not aware of an alleged scandal involving the Eurobond money.

His lawyer, Ken Ogeto said that Mr Raila’s was a ‘malicious and reckless political witch-hunt which will not pass unchallenged’.

“We demand that Hon Raila forthwith retracts his baseless and unwarranted allegations failure whereof we have instructions to institute legal action against him,” he said.

For his part, Prof Ndung’u, the former CBK governor, dismissed the claims of his alleged involvement, saying it was going to be a big battle.

“I can only talk through my lawyer because I am no longer the Central Bank of Kenya governor,” he said.

Ms Odhiambo said she was not in a position to comment on the issue.

Later, Mr Odinga, after announcing the list, told Mr Rotich and Dr Thugge to resign to allow for immediate investigations into their involvement in the saga.

Raila to face court battles as he names Eurobond “Officials” Reviewed by samrack on January 14, 2016 .