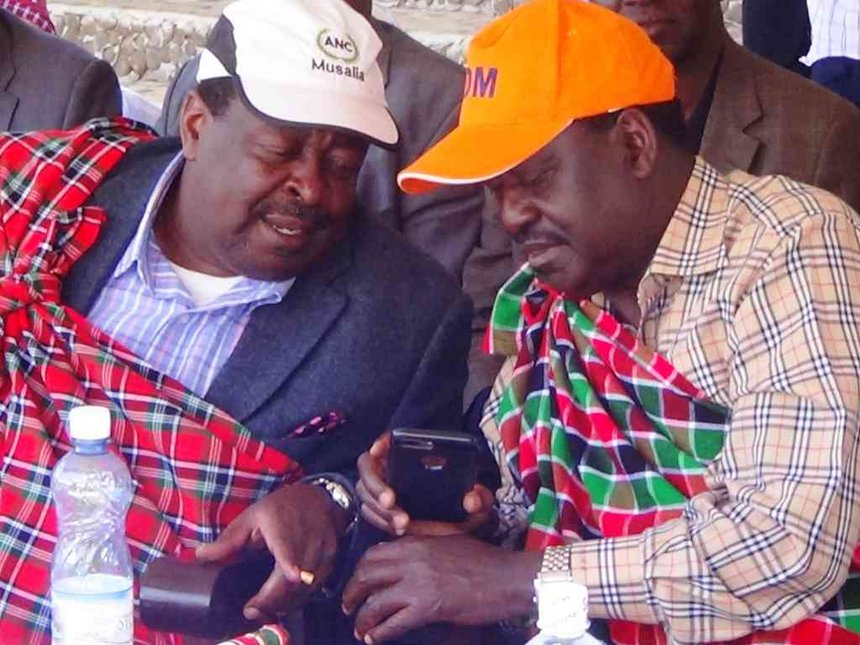 Amani National Congress leader Musalia Mudavadi with ODM’s Raila Odinga in Laikipia on December 6, 2016, when they announced that they will work together under the National Super Alliance. /ELIUD WAITHAKA

Cord leader Raila Odinga has said he will work with Amani’s Musalia Muadavadi to remove President Uhuru Kenyatta from power next year.

The two made a public appearance in Laikipia on Tuesday, saying they regretted parting ways ahead of the 2013 general election.

“We will be together in 2017,” Raila declared at Resort hotel in Laikipia North constituency, and promised Uhuru’s Jubilee Party a bruising battle.

He urged voters to arm themselves with identity and voters cards.

“Come February next year it will not be business as usual. This government is full of thieves who need to be taken home. We want to bring change to this country,” he said.

Read: We will form ‘super alliance’ with Cord to defeat Jubilee – Mudavadi

Also read: Gideon Moi to be DP in Nasa line-up

The opposition chief noted that money was being stolen through the Integrated Financial Management System, as the two leaders watch.

Raila stated that Tanzanian President John Magufuli, who has only been in office for a year, has jailed former revenue and ports authority bosses.

He further noted that five governors, several government ministers and state officials have been jailed in Nigeria over corruption-related matters.

He cited the two cases in comparison to Kenya, where he said Uhuru and Ruto use propaganda and lies to ascend to power, saying he took them to the ICC.

“Kibaki and I took a motion to Parliament proposing that we have a special local court to address the post election cases but they refused. They said ‘let’s not be vague. Let’s go to The Hague’,” said the Cord boss.

Mudavadi said the National Super Alliance was the best outfit to use to defeat the Jubilee government.

He said he and Raila were not enemies as they have worked together before and can still do so, and underlined that failure to unite will allow Jubilee to rig the pol..

“What is important is the message of unity that we should send to voters. We are not saying we do not want ODM, Wiper, Ford Kenya or the others,” he said.
“We want a special unity that will see us win the elections. Standing here shows I have that will.”

The Amani leader questioned the source of money the government has been giving at harambees.

“They are moving around with sacks of bags full money. Where do they get the Sh18m they dish out at harambees every weekend?” asked Mudavadi.

He further asked why striking doctors have not been paid while money is being given away.

Amani National Congress leader Musalia Mudavadi with ODM’s Raila Odinga in Laikipia on December 6, 2016, when they announced that they will work together under the National Super Alliance. /ELIUD WAITHAKA Raila, Mudavadi seal super alliance deal to remove Uhuru from power Cord leader Raila Odinga has said he will work with Amani’s Musalia Muadavadi