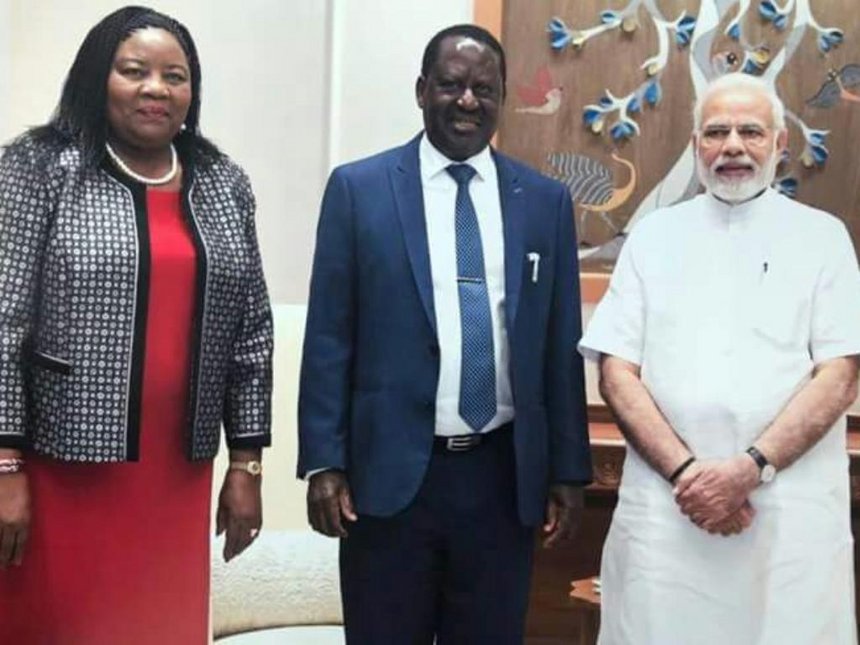 ODM leader Raila Odinga’s high-profile foreign trips have triggered speculation that he is poised to play a bigger international role in the future as Kenya’s roving envoy.

Since the historic March 9 handshake with President Uhuru Kenyatta, the NASA presidential candidate’s profile has risen dramatically as he undertakes one diplomatic assignment after another on behalf of the President.

The Star has established that the government issued a communique to all its missions abroad to treat Raila as a senior government representative whenever he visits.

Ambassadors and heads of mission are under instructions to treat Raila as the President’s representative and to personally receive him and his entourage at airports.

Raila is also provided with diplomatic security and official embassy vehicles to chauffeur him around. His expenses are catered for by the embassies through the Ministry of Foreign Affairs.

A dispatch from his spokesman, Dennis Onyango, said Raila and Modi discussed a wide range of issues of mutual interest to the two nations.

“Prime Minister Modi lauded the working relationship between President Kenyatta and Odinga as a positive example for Africa and the world of a leadership that unites rather than divides a nation. He promised to strengthen existing Kenya-India ties,” the statement said.

Onyango said Raila conveyed a message of goodwill from Uhuru to Modi.

Significantly, Raila was accompanied by Kenya’s High Commissioner to India, Florence Weche, and deputy Belinda Omino. The duo also received him when he arrived in India on Friday for the week-long visit.

Raila is accompanied by his wife, Ida. During his meeting with Modi in New Delhi, he lobbied for local exports to bridge the trade imbalance between the two countries.

He impressed upon Modi the need to import at least 100,000 metric tonnes of green grams from Kenyan farmers who invested in the crop with the Indian market in mind.

In April, a month after sealing the handshake deal with Uhuru, Raila  was the official representative at the funeral of former South African First Lady Winnie Mandela where he was treated as a top state official.

While in South Africa, he held talks with several top leaders, including Deputy President David Mabuza and former presidents Jacob Zuma and Thabo Mbeki, among others.

Although carrying no formal title in government, Raila’s status while in South Africa was presumed to be that of the official representative of President Kenyatta and Kenya.

Raila was accompanied by his wife Ida and daughter Winnie. He was was received at the airport by Kenyan High Commissioner to South Africa Jean Kamau and other embassy staff.

“Mr Odinga is on this visit in a more official capacity, officially representing the Kenyan state and the people of the Republic of Kenya,” Raila’s aide, Silas Jakakimba, wrote from South Africa .

In State protocol, only visiting presidents and some senior government officials are received by ambassadors in foreign countries. The rest are welcomed by staff working at the missions abroad without elaborate protocol.

“That answers why his visit has received all the requisite state courtesies and officialdom both from the South African government and Kenyan High Commission,” Jakakimba added.

These missions have signalled better days for the Opposition chief after making peace with his erstwhile rival, Uhuru.

During the devolution conference in Kakamega in April, Raila’s address at Kakamega High School was streamed live on the government’s official social media platforms.

Notably, the Ministry of Interior was tweeting Raila’s speech on its official handle.

The meeting did not take place due to what was described as scheduling challenges but Raila delivered the keynote address to the conference in which he made the controversial proposal for a three-tier structure of government.

In mid-May, Raila traveled to London for a five-day visit in which he attended a public lecture, met Kenyans abroad and held talks with the UK Minister for Africa, Harriett Baldwin, at the Foreign and Commonwealth Office.

The London visit underscored Raila’s transformation from a political combatant to a state functionary. He was chauffeured in official government vehicles and accorded state protocol, the privileges he enjoyed only when he served as Prime Minister in the Grand Coalition government between from 2008 to 2013.

Last month, Raila was engaged in regional efforts to broker peace between South Sudan’s warring factions. He first travelled to South Africa to meet former Vice President Riek Machar and then flew to Juba where he held talks with President Salva Kiir.

During the visits, Raila and his delegation were accorded official treatment from reception at airports by Kenya’s ambassadors Jean Kamau and Cleland Leshore, respectively, to security provided by host countries.

Kiir and Machar have already signed a peace pact in the latest efforts to end the long-running civil war in Africa’s youngest nation.

Raila is now a senior state representative Reviewed by samrack on July 4, 2018 .

Raila is now a senior state representative ODM leader Raila Odinga’s high-profile foreign trips have triggered speculation that he is poised to play a bigger international role in the future as Kenya’s roving envoy. Since the historic March 9 handshake with President Uhuru Kenyatta, the NASA presidential candidate’s profile has risen dramatically as he undertakes