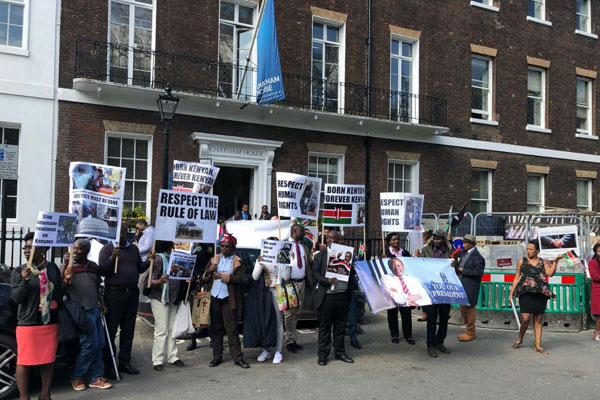 A group of Kenyans living in London on Tuesday staged an anti-Jubilee government demonstration outside Chatham House, where President Kenyatta delivered a talk.

After giving his much-anticipated speech at a venue that is associated with the core values of democracy and freedom, Mr Kenyatta emerged to confront rowdy, placard-wielding protesters chanting “respect human rights” and “respect rule of law”.

The demonstrators accused President Kenyatta of human rights abuse, ignoring the rule of law and mismanaging the Kenyan economy.

Speaking to the Nation on phone from London as the demos went on, Mr Sebastian Onyango, one of the organisers, said they were protesting against the government’s failure to bring to justice the killers of over “370 Kenyans” whose only sin was to demonstrate against alleged “electoral theft”.

“We are protesting the disrespect for the rule of law and subversion of the supremacy of court orders,” he said.

“We are fighting for electoral and social justice, inclusivity and for values and interest of Kenyans to be upheld by the leadership.”

Mr Onyango said they were against a regime that had come to an institution associated with democracy  “to hoodwink foreigners with empty rhetoric about democracy, rule of law and non-existent economic growth that only benefits the political elite, cronies, their children.”

And in a statement sent to the Nation, the group dismissed the so-called handshake between Mr Kenyatta and former Prime Minister Raila Odinga as “a self-serving move”.

They said they rejected “personality cults” and demanded that Kenyans’ interest must remain at the core of any political agreement between the two.

“We reject corruption and looting of Kenyan wealth by political class while the people continue to lead a life of desperation, misery with no proper medical and educational facilities and a half-baked infrastructure that is killing many due to corruption-driven procurement and investment,” the statement read in part.

They demanded the unconditional return of Dr Miguna Miguna, the self-declared National Resistance Movement ‘general’ who was denied entry in March and is now in Canada.

“We demand the return of the Kenyan-born NRM general and reject the decision to allow non-Kenyans to land on Kenyan soil while denying fellow Kenyans the same right as is the case of General Miguna.”

Speaking at Chatham House, Mr Kenyatta assured Kenyans abroad that they will be allowed to vote during the 2022 General Election.

“By 2022, all mechanisms will be put in place to ensure that the entire Diaspora will be able to participate in the General Election,” said President Kenyatta, who was responding to a question from a participant.

Protesters confront Uhuru Kenyatta outside Chatham House A group of Kenyans living in London on Tuesday staged an anti-Jubilee government demonstration outside Chatham House, where President Kenyatta delivered a talk. After giving his much-anticipated speech at a venue that is associated with the core values of democracy and freedom, Mr Kenyatta emerged to confront rowdy,