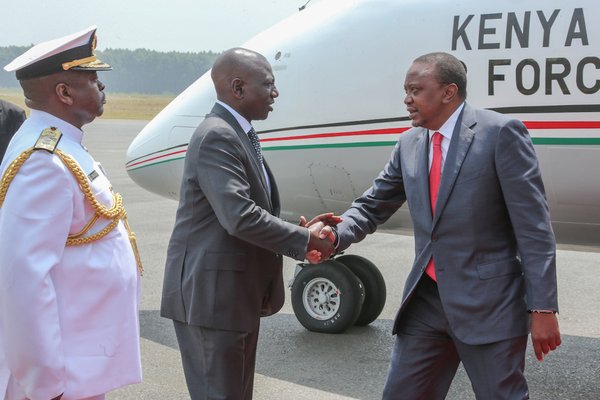 President Uhuru Kenyatta seen together with Deputy President William Ruto at Jomo Kenyatta International Airport in this file photo. The president leaves Monday for a three-day tour of Botswana.

Trade and economic ties with the southern African nation including manufacturing, mining and tourism will feature during the talks with his host, President Ian Khama, State House Spokesman Manoah Esipisu said yesterday. Mr Manoah added that Israeli Prime Minister Benjamin Netanyahu is expected in Kenya on July 4 for a three-day state visit, immediately after President Kenyatta returns from Botswana. Soon after, Uhuru will host India’s Prime Minister Narendra Modi on July 10 and 11, as part of the Indian leader’s four-nation Africa tour that will also take him to South Africa, Mozambique and Tanzania. Manoah indicated that the Indian Government was planning to set up a specialised cancer hospital in the country in the near future. “A memorandum of Health co-operation between Kenya and India is being negotiated at the moment and it includes the setting up of the facility,” he said. Manoah said India had offered to donate to Kenya a telecobalt cancer treatment machine manufactured in India to help in cancer treatment in public health facilities that were facing an acute shortage of such equipment. He said the effectiveness of the machine has been proven in 15 cancer facilities in India. READ MORE 8,000 tea growers in fear as Murang’a factory faces closure Kenya coffee farmers protest Uhuru task force report, say their views ignored Radiology services now at affordable fee And Kenya is set to lose the position of vice chairperson of the African Union Commission as the tenure of Erastus Mwencha lapses next month.

nd Kenya is set to lose the position of vice chairperson of the African Union Commission as the tenure of Erastus Mwencha lapses next month.

Manoah said that Kenya will instead lobby to have the slot of Commissioner for Infrastructure and Energy. Elections of new officials to the commission are slated for July 17 to 18 during an AU summit in Kigali, Rwanda. Mr Mwenchwa has been in office since 2008, having served two terms that are not renewable according to the commission’s statutes. Manoah said Kenya is lobbying to have the Kenyan slot taken by Mahboub Maalim, who is the executive secretary of the Intergovernmental Authority on Development. Ambassador Maalim was a Permanent Secretary in Ministry of Special Programmes as well as Ministry of Water between 2004 to 2005 in former President Mwai Kibaki’s Government. The seat of Chairperson of the Commission will also be up for grabs since the current Chairperson Dlamini Zuma, a South Africa, will reportedly not be seeking re-elect
Read more at: http://www.standardmedia.co.ke

President Uhuru Kenyatta leaves for three-day tour of Botswana ahead of Netanyahu visit Reviewed by samrack on June 27, 2016 .