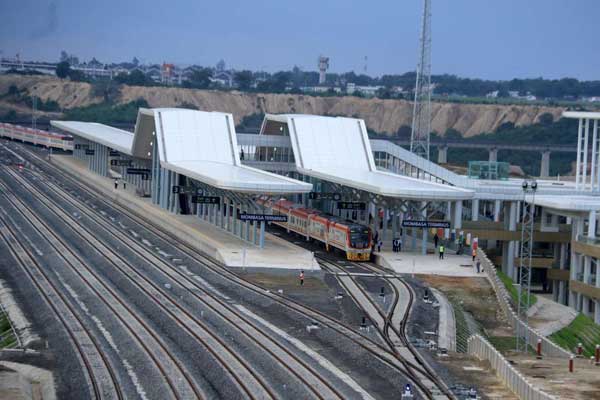 President Uhuru Kenyatta on Wednesday joined more than a thousand Kenyans and diplomats in an inaugural ride on the brand new passenger train from Mombasa to Nairobi.

The journey aboard the Madaraka Express, travelling on the standard gauge railway, saw close to 1,300 people travel to Nairobi from Coast for free.

They were also treated to free food and drinks. The number of passengers exceeded the 1,200 limit but President Kenyatta told reporters aboard one of the coaches that the trip signalled the start of good tidings for the Kenyan public transport system.

“I feel glad. It is wonderful and a new experience that we will be bringing to all Kenyans at an affordable price,” he said, adding: “This is a true beginning of our transformation and ultimately Kenyans from all corners will begin to see the benefits, not just from this rail but the ancillary activities that will begin to develop as a result of us developing this line and its continuation to Kisumu.”

During several stop-overs, the President said travellers will be charged Sh700 on the economy class between Nairobi and Mombasa and as little as Sh50 for a ride between Mombasa and Mariakani. Tickets can be bought at any train station.

The train, driven by China-trained assistant locomotive drivers Alice Mugure, 27, and Concilia Owire, 23, had 16 coaches, 15 of which were filled to capacity.

Escorted by police and military choppers, the train carried many government heads of department and parastatal chiefs, including those who have since resigned to run for political office. It also had politicians and elected leaders.

One coach was filled with employees from the Central Bank, National Treasury and the Kenya Revenue Authority while another had diplomats from across Africa invited to witness what President Kenyatta termed a reopening of the hinterland. Another carried the Chinese.

Journalists, ordinary Kenyans and chiefs clad in their uniforms occupied other coaches as the train began its first journey.

Some of the passengers had to stand for most of the journey as others were left behind when they disembarked with the President during the many stopovers.

As the train snaked through the dry lands of Makueni, King Ramadhan Divayu Babisan from Tana River sat near the window, enjoying the view of wild animals grazing on the roadside.

“The trip has been enjoyable and it has given me a new experience I never imagined,” said the leader of one of the smallest communities — the Wailwana from Bura, Tana River. “We just need to focus on the scourge of corruption, which may threaten this service as it has done to other projects before,” he added.

His local chief, he explained, selected him to enjoy the ride because he is a community leader who sometimes teaches the public about civil rights and duties.

Mr Martin Owino, of Mt Kenya University, who said he was selected for the trip because he is a student leader, described his experience: “It has been a great feeling. I am happy, especially today, because the ride has been smooth and we were served by the youth. I feel it is a good opportunity for them and this is what we need to focus on.”

In his briefing to journalists, the President said he hoped there will be a continuity of infrastructure projects regardless of who wins the August 8 elections.

He said all projects under Vision 2030 must be completed regardless of changes in government.

“It is my strong belief that administrations come and go. Governments are permanent and so we have a responsibility as leaders and even those who come after us to follow through because all these projects are all envisioned in Vision 2030 and they belong to Kenyans,” he said.

The railway is the product of a loan worth Sh327 billion from China. It had been conceived during the Grand Coalition Government of Mwai Kibaki and Raila Odinga.

SGR commuter train hostess in one of the passenger wagons after President Uhuru Kenyatta launched it on May 31, 2017. PHOTO | JEFF ANGOTE | NATION MEDIA GROUP

The President said his administration was following through a vision established years ago when he was not in power “When we took over in 2013, there are no projects that we stopped. We actually focused ourselves on finishing those that had been initiated or were in various stages of completion by the previous administration,” he said.

“We only started our programmes once we had completed old ones. That is why we are now at the tail-end. We actually delayed some of the projects we had wanted to start to complete the pending ones.”

The passenger and cargo trains will now continue on test runs until December when they will be fully operational.

The President said the railway’s related facilities such as special economic zones in Naivasha, an industrial zone in Voi, an expanded railway to Kisumu and an expanded port, were in the pipeline.

President Uhuru Kenyatta joins hundreds in train ride Reviewed by samrack on May 31, 2017 .