President Uhuru bounces back despite setbacks and scandals 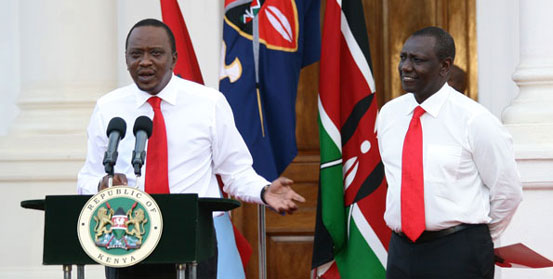 President Uhuru bounces back despite setbacks and scandals

SUMMARY Some of his critics believed the Jubilee administration would be buried by the biting unga shortage By Tuesday evening, President had opened huge gap between him and Raila Jubilee ring-fenced its “strongholds” and persistently raided Opposition zones NAIROBI, KENYA: The last two years have been the most difficult for the Uhuru Kenyatta presidency as his administration was plagued by a series of setbacks that the Opposition exploited to portray it in bad light.

But like the mythical phoenix, he appears to have risen from the ashes if election results streaming in last night were anything to go by. Uhuru appeared destined for another term at State House, barring any dramatic comeback by his closest rival, Raila Odinga, who was trailing him by more than a million votes. Some of the President’s bitterest critics believed the Jubilee government would be buried by the biting drought that had made maize flour, Kenya’s staple food, inaccessible. Prices of other commodities such as sugar were also out of reach and there was talk of an ‘unga revolution’, which many believed would send the President and his Deputy William Ruto packing. ALSO READ: Conceding defeat best solution to averting a political crisis in polls Mid last year, insurgents from Somalia staged a number of attacks in Kenya and Somalia against military installations, triggering calls for Kenyan soldiers in the neighbouring country to be recalled. And at home, a spate of fires in secondary schools led to widespread destruction of property as the education sector grappled with student indiscipline and disgruntlement. The biggest blow was the agitation by the Opposition to remove Independent Electoral and Boundaries Commission (IEBC) commissioners, less than a year to the polls. On Tuesday when the results started trickling in, it was evident that the President had overcome most of the challenges thrown his way by his detractors and had actually managed to secure some backing from areas perceived to be Opposition strongholds. It has not been a walk in the park for Jubilee Party which was formed in September last year after the dismantling of The National Alliance party and as well as the merging of 11 friendly parties. There was indignation as some of the parties which had earlier pledged allegiance to the President refused to dissolve, leading to intense intra-fighting, such as Party of National Unity and Chama Cha Mashinani led by Meru Governor Peter Munya and his Bomet counterpart Isaac Ruto respectively, turned against the new party. ALSO READ: I will accept the will of Kenyans, says Uhuru But when the dynamic duo, as Uhuru and his deputy are called, hit the campaign trail, they did with so much vigour that they left some of their allies and competitors panting as they tried to catch up with them. The Jubilee campaign made a record 504 campaigns in different parts of the country and in some areas made numerous trips confounding their rivals who kept on mirroring their actions. The messaging, too, was hard and was targeted at the Opposition leader portraying the unit he was leading as devoid of any plans. The tag apportioned to the Government of being corrupt was turned around against the Opposition who were accused of fraternising with the kingpins of corruption cartels. But as Jubilee ring-fenced its “strongholds” it persistently raided Opposition zones, at times offering prime Cabinet positions. The late Joseph Nkaissery, who was an Orange Democratic MP, was poached and offered the plum interior ministry. Jubilee was lumped together with IEBC which was targeted by the Opposition and multiple legal suits filed against it, challenging the manner in which the electoral body had awarded the tenders for printing the ballot boxes as well as the preparations for the elections. Uhuru had also to contend with the many independent candidates who had lost during the party nominations which had been shrouded in controversy after cancelling the digital smart cards. ALSO READ: PHOTOS: Kenyan presidential candidates cast their ballot Many ended up blaming some powerful forces in the party for their defeat and opted to run as independent presenting a headache because they insisted that Jubilee stop campaigning for its nominees. Scandals and challenges Jubilee battled March, 2014: The Public Procurement Administrative Review Board cancels the Sh24.6 billion laptops tender for Standard One pupils after it found the tender to Olive Telecommunications Pvt Limited had not been awarded fairly. January 2015: Police lob teargas canisters at Langata Road Primary School students in Nairobi as they protested the grabbing of their school playground. Kenyatta’s Deputy, William Ruto later admitted to owning a stake in the nearby Weston Hotel, which is built on a 0.77ha parcel of land. November 2015: Former Cabinet Secretary for Devolution Anne Waiguru resigns after a special Auditor General’s report showed taxpayers lost Sh1.9 billion in NYS saga. October 2016: An in-house audit report at the Ministry of Health reveals that Sh5.2 billion was misappropriated. October 2016: It emerges 99 mobile clinics were lying at the National Youth Service yard at Miritini in Mombasa County, six months after they were imported from China. Estama Investments Ltd was awarded the Sh1 billion tender to supply 100 clinics. Official documents showed each clinic was bought and imported at Sh1.4 million before being sold to the Government at Sh10 million . Chickengate: British businessmen Christopher Smith and his son Nick Smith, who worked for Smith and Ouzman, are found to have paid bribes to Kenyan officials of the Kenya National Examinations Council and the Interim Independent Electoral Commission. The scandal raised serious questions on Jubilee government’s commitment to fighting corruption. ALSO READ: President Uhuru calls for peace as Kenyans vote Doctors’ strike that lasted 100 days Nurses’ strike Teachers’ strike Unrest in schools Failed examination system El Ade attack on Kenya Defence Forces
Source: https://www.standardmedia.co.ke/

President Uhuru bounces back despite setbacks and scandals Reviewed by samrack on August 9, 2017 .

President Uhuru Kenyatta and his deputy William Ruto (PHOTO: File) President Uhuru bounces back despite setbacks and scandals  SUMMARY Some of his critics believed the Jubilee administration would be buried by the biting unga shortage By Tuesday evening, President had opened huge gap between him and Raila Jubilee ring-fenced its “strongholds” and persistently raided Opposition