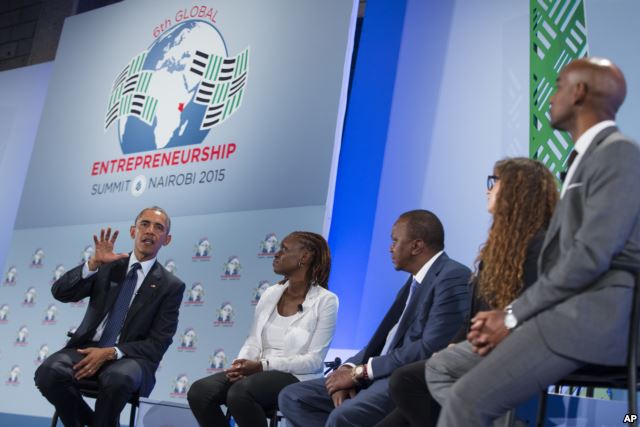 President Barack Obama and President Uhuru Kenyatta opened the 6th annual Global Entrepreneurship Summit (GES), co-hosted by the United States and the Government of Kenya in Gigiri and announced a Sh100billion kitty to promote entrepreneurship in Africa.

Besides the goodies announced, Kenya will host one of the new women entrepreneurship centres in Africa alongside Mali and Zambia.

The two presidents demystified officialdom and mingled with entrepreneurs in a rousing session in which they even retreated to a panel with a Kenyan entrepreneur Judith Owiga and reiterated importance of entrepreneurship as a driver for economic growth, social inclusion, and secure communities.

Official statement released by White House said the United States has been a leader in catalyzing entrepreneurship globally by developing innovative ecosystems; advocating for stronger business climates through rule of law and transparent business conduct; promoting entrepreneurship for women, youth, and marginalized communities; and mobilizing the private sector to expand impact.

GES 2015, held in Nairobi, Kenya, is the first summit held in sub-Saharan Africa, highlighting the entrepreneurialdynamism of the continent.

The summit has attracted about 1,000 outstanding entrepreneurs and investors from across the world for dynamic, outcome-oriented sessions; mentoring; and opportunities to showcase their work.

President Obama said he was accompanied by presidential entrepreneurship ambassadors who were keen on supporting innovative ideas and challenged business people to mingle with them.

With a strong focus on African-based solutions, the summit showcases how investors and entrepreneurs from other regions of the world can connect with the continent in new ways. GES has become a preeminent annual gathering that provides emerging entrepreneurs with exceptional networking, insight, and investment opportunities.

President Uhuru said, “It is time to turn challenges into opportunities and make young people flourish. We must create an enabling environment to deal with structural problems. You can count on my support.”

In less than 12 hours after arriving in Kenya, President Obama, accompanied by dozens of presidential entrepreneurship ambassadors, deleivered goodies which will go a long way in improving Kenya and other African countries.

Speaking Saturday in Nairobi, President Obama announced over $1 billion (Sh100billion) in new commitments from banks, foundations, philanthropists, and the US Government, with half of that money going to support youth and women entrepreneurs.