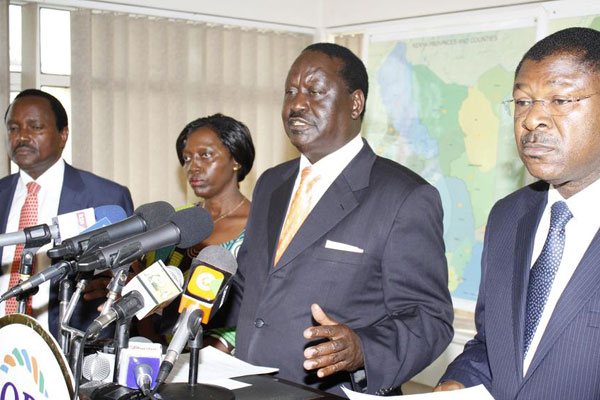 Opposition leaders Monday revealed the memorandum they presented to US President Barack Obama in which they asked him to support their push for far-reaching electoral reforms among other concessions they are demanding from the government.

Mr Odinga, Mr Kalonzo Musyoka, Mr Moses Wetang’ula and Ms Martha Karua also asked the US leader to insist that the government implement the one-third gender rule as prescribed by the Constitution.

The four presented their memorandum to Mr Obama on Sunday, shortly before he addressed a gathering of invited guests at the Safaricom Indoor Arena at the Kasarani stadium.

And at a press conference in Nairobi yesterday, the four threatened to boycott the 2017 General Election unless the changes they are demanding are implemented.

They said that reforming the Independent Electoral and Boundaries Commission (IEBC) was key to avoiding a repeat of the 2007/8 post-election violence.

“The elections of 2013 faced numerous challenges, including the wanting registration of voters and the tallying and relaying of results.

“The failure of the electronic system on voting day dealt a deadly blow to the credibility of the whole exercise,” they said in a statement.

They appealed to the US Government to help with the creation of a reliable ICT infrastructure and capacity for the electoral team ahead of the next elections.

“We urge the US to support reforms that can restore Kenyan voters’ faith in the IEBC and the electoral system,” read their memorandum.

“Mr President, we need encouragement to implement the constitutional principle of no more than two-thirds of either gender should occupy elective or appointive positions in the public sphere.”

On corruption, the leaders protested the absence of a well-structured and comprehensive strategy to fight the crime, which they said is among the factors that have undermined the war against insecurity.

They also said selective prosecution of high-ranking government officials had undermined the fight against corruption.

“Corruption thrives in opaque and closed environments. Curtailing of liberties guaranteed by our Constitution, therefore, threatens our nascent democracy and aids corruption.

The enactment of laws such as the Kenya Information and Communications (Amendment) Act, the Media Council (Amendment ) Act and the Security Laws (amendment) Act, have adversely affected the media by imposing restrictions that are extremely overboard, overreaching and vague. These statutes provide harsh penalties that are disproportionate to the anticipated offences and are a clawback on media freedom,” said the memorandum.

And Monday, Mr Odinga asked President Uhuru Kenyatta to act on corruption by starting at the top of his administration.

“One person is contributing Sh10 million in harambees every week and his pay is known. Per month he contributes about Sh50 million and he says he is generous,” said Mr Odinga and demanded an audit of such leaders.

On terrorism, they also asked President Obama to help the country develop strategies that will enable Kenyan solders to exit Somalia and leave no gap in the effort to create stability in the neighbouring country.

They had also asked Mr Obama to support devolution, which they said was constantly facing threats from the national government.

On Monday, the Cord leaders said President Obama had addressed their concerns adequately.

“The US President warned against the economics of exclusion and termed them fodder for extremist groups,” said Mr Musyoka.

“We have sounded this alarm. This has been at the heart of our call for the strengthening of devolution as a way of ensuring equitable development across our country.”

However, he refused to reveal who among the four had been criticised by Mr Obama when he met them on Sunday.

The US leader had said that one of the opposition leaders had told the US to keep off Kenyan affairs when he was in government.

Mr Musyoka told journalists that they should let the matter rest.