The wind farm, which has a maximum capacity of 310.25 megawatts, was connected to the national grid on September 24 last year after a 15-month delay.

This was after construction of the 438 kilometre, 400 kilovolts transmission line from the plant site in Marsabit to Suswa sub-station faced a series of setbacks, including securing financing for the project and land compensation.

The project will complement the government’s commitment to increase electricity generation to 5,000W and is part of Kenya’s Vision 2030 flagship project.

The launch of the line will see increase in electricity supply, quality, reliability and reduction of power cost.

The project, which cost Sh28 billion was financed by the government (75 percent) and the Spanish government (25 percent). 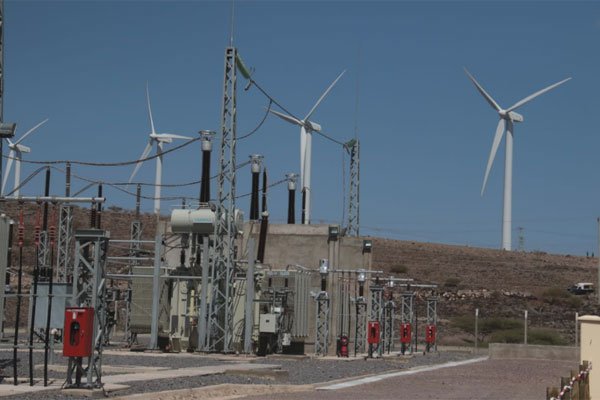 A section of the Lake Turkana wind project in Marsabit County which will be opened by President Uhuru Kenyatta on July 19, 2019. PHOTO | JOSEPH KANYI | NATION MEDIA GROUP

The cost will, however, be halved after purchases by Kenya Power cross 1.68 billion units (measured in kilowatt-hours) mark under the deal, a threshold Mr Fazal projected will be hit at the end of October.

LTWP executive director Rizwan Fazal said there will be more power available at a lower tariff to Kenya Power.

“So instead of power bills going up from November as they have traditionally due to drought, they could stay the same,” he said.