NAIROBI, 26 September 2020 (PSCU) – President Uhuru Kenyatta has restated the Government’s commitment to upgrading sporting facilities in the country to match international standards.Speaking when he opened the refurbished Nyayo National Stadium today, President Kenyatta said the redevelopment of the stadium is not an isolated case.

He said the Government is the on the verge of completing the construction of Jamhuri Sports, Leisure and Entertainment Park in Nairobi as well as the upgrading of sporting facilities in Eldoret, Marsabit, Meru, Chuka, Kisumu, Nyeri, Makueni, Wanguru in Kirinyaga and Kirigiti in Kiambu.

The President directed the Ministry of Sports, Culture and Heritage to work round the clock to ensure the facilities are completed and ready for commissioning by the end of December 2020.

“In addition to the facilities, I have earlier mentioned, we are in discussions with the county governments of Mombasa, Kakamega, Narok and Kisii to co-finance and upgrade to international standards, the existing facilities in their counties,” President Kenyatta said. 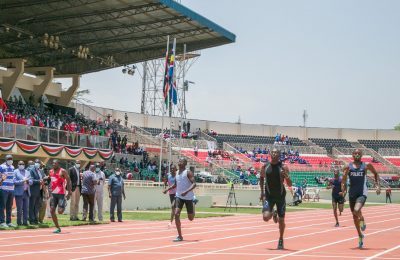 With the re-opening of Nyayo National Stadium, President Kenyatta said Kenya’s sportspersons will add new pages to the country’s long and celebrated history as a sporting powerhouse.

Meanwhile, the Head of State expressed satisfaction that in just over a week Nyayo National Stadium will host the Kip Keino Classic – the first ever World Athletics Continental Tour event to be held on the African continent.

“The event named after our great hero and trailblazing Olympic champion, Kipchoge Keino, will bring together elite athletes from all over the world to compete in various track and field events on Saturday, October 3rd 2020.

“Our being entrusted to host this global event is evidence of the confidence that the world has in our country and our levels of COVID-19 containment as it will be the first global sporting event to be held on the African continent since the advent of the COVID-19 Pandemic,” the President said.

President Kenyatta pointed out that the Kip Keino Classic and other sporting events that will be held as the country gradually and progressively re-opens will be conducted with strict adherence to all applicable Covid-19 protocols, guidelines and regulations.

“This will ensure that sportspersons, coaches, media and spectators are kept safe and healthy,” President Kenyatta said.

He asked the Ministry of Sports to redouble its efforts in re-convening major sporting events that were postponed as a result of the Coronavirus pandemic.

“I further direct the Ministry to resume preparation processes towards the Olympic and Paralympic Games and to engage with our local sports associations on how Kenyan athletes can resume competing in sporting events abroad,” the President said.

The President also took the opportunity to wish Kenyan athletes success as they head out to the London Marathon scheduled for 4th October 2020.

“Led by World Marathon Record holders Eliud Kipchoge and Brigid Kosgei, I have no doubt that they will, once again like their colleagues in Doha, make Kenya proud, despite the challenges they have had in training due to the COVID-19 restrictions,” he said.

The Head of State reminded Kenyan athletes to safeguard the country’s reputation as a sporting powerhouse by competing clean and winning fairly as he ordered the Ministry of Sports to provide the required resources for enhanced anti-doping education, testing and reporting.

Sports, Culture and Heritage CS Amina Mohamed thanked President Kenyatta for being the force behind the revitalisation and facelift of the Nyayo National Stadium popularly known as “the arena of champions”.

The CS disclosed that several international sports bodies have sent their representatives to inspect the facility and have rated it among the best on the African continent.

President Kenyatta Restates Government Commitment To Upgrading Sporting Facilitie NAIROBI, 26 September 2020 (PSCU) – President Uhuru Kenyatta has restated the Government’s commitment to upgrading sporting facilities in the country to match international standards.Speaking when he opened the refurbished Nyayo National Stadium today, President Kenyatta said the redevelopment of the stadium is not an isolated