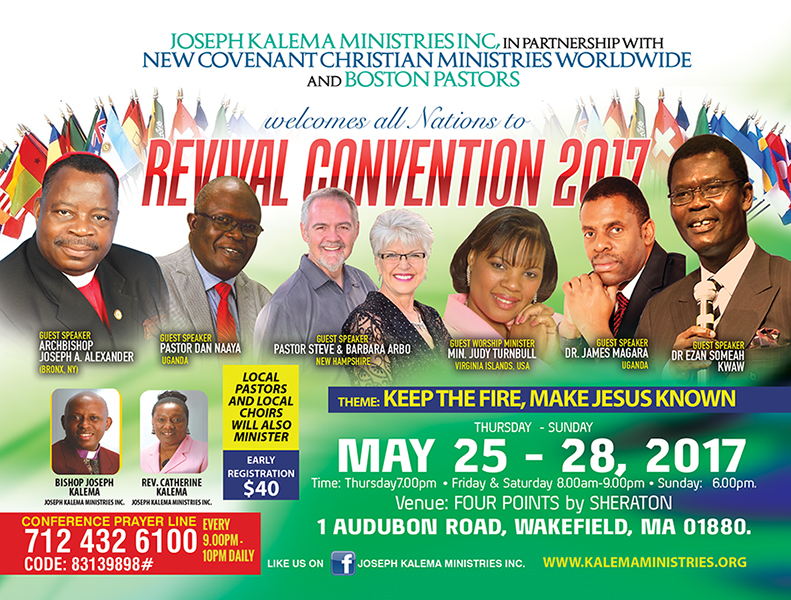 I hope this note finds you safe and sound in the Holy Ghost. In this season of Lent, many believers are fasting and humbling themselves before the Lord taking time to position themselves to hear His voice. At the same time reflecting on their relationship with the Lord in their journey of faith.

In the same timeline, I would like to encourage you  that you do not forget about the Heavenly demand and assignment the Lord has put upon you to commit to the cause of praying and intercepting the plan of the enemy in our neighborhoods and cities so that the word of God could have a free course to hearts of the people and save them. Reinforcing the righteousness of God and His Kingdom as we prayer walk, or prayer drive our neighborhoods; the trail of His glory marks our route and restrains evil and powers of darkness hovering in the area.

WHY MASSACHUSETTS?
The Revival Convention mission to Massachusetts begun in 2015 when through a dream, God revealed that a dark serpentine force in a form of an Anaconda, had encircled around church leaders in MA and regions beyond , squeezing life and strength out of them. As they lay there helpless, the church foundation became a big sinkhole and collapsed underneath where I was standing. Then I heard voices of helpless people shouting ,help, help ! As they dwindled into the atmosphere, I heard a voice saying – we the believers got to move quickly and swiftly to stand at the spiritual gateway of America for the gates have gone so rusty and are falling apart. This dream re-occurring in three different  times in one night left such an intensity and urgency to respond to that  cry of the Spirit,  to redeem that gateway.

ACTION PLAN was to call upon intercessor partners and mobilize the local churches to participate in this assembly;   sit under God-trained instructors and teachers and get the marching orders. We progressively began engaging accurately this heavenly vision May 2015. Every year until The Lord says otherwise, we sense the intensity increasing like birth pangs and there is still a cause to keep going to the same place until the land is set free, and the gate is rebuilt.   You may wonder why I am writing all this info and perhaps figuring out why is this important to me?

This is what the Holy Spirit told me this morning, ” ANY BELIEVER CAN BE ANOINTED AND MOVE UNDER ANOINTING BUT ONLY THOSE WHO ARE CHOSEN RECEIVE THE MANTLE TO TAKE ON NATIONS! MANY ARE CALLED BUT FEW ARE CHOSEN. EVERY BELIEVER TRUSTS GOD; BUT GOD TRUSTS THOSE HE CHOOSES! ”

The Lord asked me yesterday in a still small voice, “Can I trust you?” I quickly remembered Paul in one of his letters In Acts 26:19 Paul, a prisoner awaiting to be sent to Rome for trial looks back on his life and ministry and tells King Agrippa, “So, King Agrippa, I was not disobedient to the heavenly vision”. The heavenly vision on the road to Damascus influenced his whole life and ministry. Throughout Paul’s life, this heavenly vision remained with him, guiding him, sustaining him and strengthening him. It remained with him as a permanent and dynamic force in his life. He faced a lot of difficulties and trials in his ministry.

THAT’S WHY YOU ARE RECEIVING THIS EMAIL. YOU ARE CHOSEN BY GOD FOR SUCH A TIME AS THIS! GOD HAS ANOINTED YOUR TONGUE TO SPEAK TO NATIONS, THAT’S WHY YOU ARE DIFFERENT FROM OTHER BELIEVERS AROUND YOU! NATIONS ARE LOCKED UP INSIDE YOUR SPIRITUAL WOMB AND THEIR REDEMPTION IS IN YOUR MOUTH!  YOU HAVE THE MANTLE TO FREE NATIONS BY THE GRACE OF GOD UPON YOUR LIFE!     MATHEW 10:26-28

So let us heed this Macedonian call to stand at the spiritual gateway of America and free America from its spiritual bondage! You are the vessel the Lord has chosen, that’s why it is very crucial for you to enlist in this army of prayer patrolling our cities; that the Lord is building! WHEN THE FOUNDATIONS ARE SHAKEN, WHAT CAN THE RIGHTEOUS DO? CO-OPERATE ANOINTING BRINGS HEALING AND RESTORATION FOR THE NATIONS.

ADMISSION IS BY REGISTRATION ONLY. If you haven’t registered, click here
https://fs30.formsite.com/Jose phKalemaMinistries/form6/index .html

Email me back on any question about any help you may need, or any other clarification.

ACCOMMODATION: The Sheraton hotel has given us a great package. We can share as many as four in each room  and split the room charge between selves.  Details on the Registration form.

Let me know if you need anything else.

PRAYER PATROLLING OUR CITIES:INTERNATIONAL REVIVAL CONVENTION  MAY 25TH – 28TH, 2017. (Memorial  holiday Weekend 2017 in USA, ALL ROADS LEAD TO SHERATON HOTEL IN WAKEFIELD, MA I hope this note finds you safe and sound in the Holy Ghost. In this season of Lent, many believers are fasting and humbling themselves before the Lord taking