Police to have forensic lab by early 2017 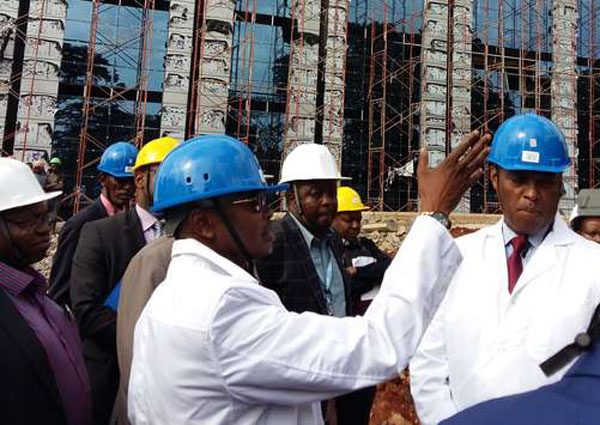 Inspector General of police Joseph Boinnet (front) and Director of Criminal Investigations Ndegwa Muhoro inspect the progress of the construction of a forensic laboratory. Mr Boinnet has said the lab will be fully operational within the first quarter of next year. PHOTO | NATIONAL POLICE SERVICE PRESS

Police to have forensic lab by early 2017

For a long time, the lack of a forensic laboratory has made it hard for police to prosecute terror and other criminal cases.

But this is set to improve following the construction of the national police forensics laboratory which will be ready in October.

Inspector General of Police Joseph Boinnet has said the lab will be fully operational within the first quarter of next year.

The lab will be used by specialised units of the Directorate of Criminal Investigations and other law enforcement agencies to scientifically analyse samples that would then form part of evidence against suspects in court.

The opening of the lab will be a much-needed shot in the arm for police investigators, which has many criminal cases thrown out by the courts for lack of evidence.

Mr Boinnet described it as a game changer after he inspected the construction of the mega project at the DCI headquarters Friday.

“The physical structure will be completed in October then we begin fixing the equipment. And once we get everything we require then by the first quarter of next year it will be fully operational,” he said.

It will make police independent when carrying out DNA, ballistic and explosives analysis.

At present, they rely on the Government Chemist at Kenyatta National Hospital for biological and chemical analysis and in complex DNA cases, they seek help abroad, mostly South Africa and Europe.

For instance, investigations into the brutal murder of human rights lawyer Willie Kimani, his client Josephat Mwenda and taxi driver Joseph Muiruri are being conducted with the help of United States’ Federal Bureau of Investigations.

“We have other labs and facilities but not centralised in one facility like this. We have biological and chemical analysis facilities at the Government Chemist but we want to bring everything here,” said Mr Boinnet.

Police detectives will also be trained to ensure their skills are in tandem with the new technology. The police boss also unveiled new bomb disposal vehicles at the DCI headquarters on Kiambu Road.

Regarding the lab, contractors will be required to advise on installation and commissioning of the equipment.

Criminals have taken advantage of modern technology and police in Kenya have always found themselves playing catch-up, especially when dealing with cybercrime.

The project is long overdue because a plan to set up the lab was mooted in 1990s but failed due to corruption scandals.

The initial project to build a Sh4.1 billion laboratory aborted in 2003 after it was linked to Anglo Leasing projects.

Inspector General of police Joseph Boinnet (front) and Director of Criminal Investigations Ndegwa Muhoro inspect the progress of the construction of a forensic laboratory. Mr Boinnet has said the lab will be fully operational within the first quarter of next year. PHOTO | NATIONAL POLICE SERVICE PRESS Police to have forensic lab by early 2017