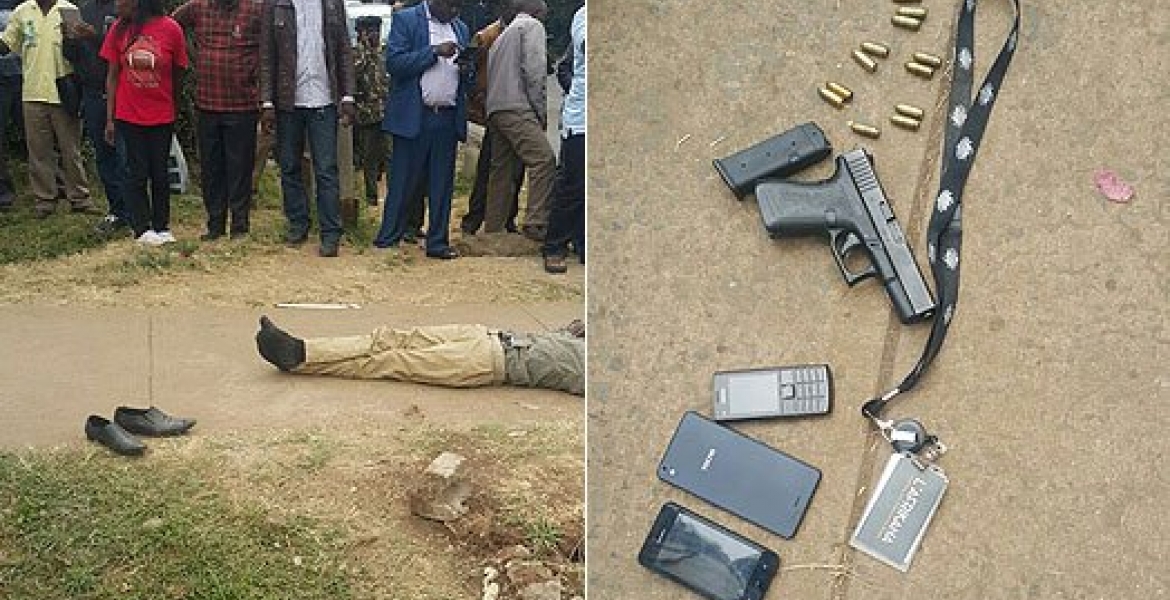 Four of the suspects were shot dead along Mombasa road, while the other two were gunned down in Kilimani area where police recovered a Glock 19 pistol that was robbed from a lawyer in Kikuyu town two weeks ago.

The main suspect was been identified as Kennedy Kinyanjui, 23, dubbed Nairobi’s most dangerous and rude robber -and the other as Alex Mbugua, 22.

Mr Kinyanjui, who had been on the police radar for about a month, shot and killed his aunt, Alice Wanjiru, 50, on June 16, after she wired back some Sh60,000 he had sent her through M-Pesa for safe keeping.

His mother Jackline Njeri, sister Wanjiku Wainaina and a brother have all been charged at the Kikuyu law courts with being in possession of stolen property and being accomplices in robberies.

It is said that Mr Kinyanjui suspected that his aunt might have leaked information to the police about his criminal activities.

Police say he was so daring that he always dare his victims not only to mark his face but also report to the police that they were “attacked by Kinyanjui”.

He would shoot most of his victims on the head, according to the police.

He was, however, expelled and he joined Rungiri High School where he dropped out in Form Three.

Mr Kinyanjui, who hails from King’eero area in Kiambu, headed the gang that also shot and seriously injured a businessman in Ruaka on July 14, who later died while undergoing treatment at a city hospital.

Following the Ruaka shooting, detectives from the Flying Squad launched a covert operation in the area for about a fortnight.

But on the day the detectives raided their hideout, Mr Kinyanjui and his gang engaged them in a gun fight and managed to escape, leaving behind an AK47 rifle and a Ceska pistol. His wife was arrested but was later released.

The gang later waylaid a lawyer in Kikuyu and told him that they knew he had a gun. They stole it and, as usual, ordered him to report to the police.

The gang then moved to Limuru but realized they were being trailed. They shifted to a hideout in Murang’a before moving to Marikiti area in Mombasa.

The officers followed them but could not locate them.

The gang later moved to Kikuyu and on July 21 at around 10pm, while riding on a motorbike, they attacked Michael Wachira Kangaro, 43, at the gate of his residence. They had trailed him from his place of work before they shot him on the head and chest.

Last Sunday, August 7, a three-man gang attacked David Ochieng Gira and his fiancée Margaret Wanjiru around Muguga and robbed them of Sh80, 000 and two mobile phones.

They took control of the car and drove to Kamandura Girls Secondary School where they abandoned the couple. Moments later, they robbed Catherine Gitahi of her car which they drove towards Nairobi.

The description of the attackers and their modus operandi suited one man -Mr Kinyanjui and his gang.

So, on Wednesday night, the police decided to put an end to the madness. Operation hunt Kinyanjui kicked off at exactly 9pm -and six hours later, he was gunned down alongside three of his accomplices near City Cabanas restaurant along Mombasa road.

The gang is said to have left Thogoto to Gachie via Wangige. They then joined Red Hill road to Westlands. From Westlands, they moved towards the city centre but detoured to Majengo via Forest Road

From Majengo they joined Mombasa Road through Industrial Area before the police caught up with them after a dramatic chase.

Nairobi County police commander Japheth Koome on Thursday said that the armed gang had been linked to a series of robberies and murder, especially within the neighbouring Kiambu county.

Kilimani OCPD Peter Kattam said that the two had robbed a family and were escaping on a motorcycle along Muringa Road around 10.30am.

However, on joining Elgeyo Marakwet, they crashed into a lorry that was headed towards Ngong Road. They shot twice at the driver but he escaped unhurt.

The officers who were pursuing them caught up with them and felled them in a hail of bullets. Two Ceska pistols and other items believed to have been stolen from other victims were recovered.

The same gang had robbed another man in Kikuyu before they rode to Kilimani. The pistol, loaded with 13 rounds of ammunition was robbed from a lawyer in Kikuyu two weeks ago and the matter had been reported at the Kikuyu police station.

Police said that the gang was behind a series of robberies within Dagoretti, Gigiri and Kilimani divisions.

At least four people positively identified the two as their assailants.

The gang had on Saturday attacked Ms Zena Ali, an employee of Australian Embassy at the gate of her residence in Kileleshwa.

She positively identified the lanyard and her staff ID card, which the slain suspects had stolen from her and, amazingly, still had in their possession.

Police also recovered a phone belonging to John Muthoka. The two had stolen it from him three hours earlier before they met their deaths.

Police Shoot Dead ‘Kinyanjui’, Nairobi’s Most Arrogant Robber Police shot dead six suspected robbers and recovered four firearms in two separate incidents Thursday. Four of the suspects were shot dead along Mombasa road, while the other two were gunned down in Kilimani area where police recovered a Glock 19 pistol that was robbed from a lawyer in