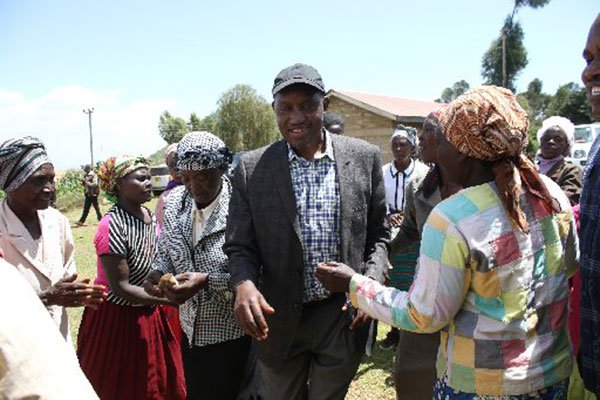 Naivasha MP John Kihagi (in cap) at a past function. He was deported from Italy on March 14, 2017. PHOTO | PHOEBE OKALL | NATION MEDIA GROUP.

Naivasha MP John Kihagi Karanja is being investigated by police after he was deported from Italy on Tuesday.

The MP was first held by authorities in Rome, the European country’s capital, before he was put on a flight back to Nairobi.

On arrival, he was again held by police at the Jomo Kenyatta International Airport because he landed without his passport which had been seized by the Italian officials, and given to cabin crew with instructions to deliver it to their Kenyan counterparts as a parcel.

An official privy to the report said stamps on the travel document showed the MP had travelled to Europe three times before but the details of his entry and exit could not be found in the electronic database shared among European countries.

Failure to detect the details in the electronic register suggested the stamps were probably forgeries.

At JKIA, the MP was seized by airport detectives who detained him as they conducted interrogation.

Images of his passport seen by the Nation showed it had 2015 entry and exit stamps that aroused the suspicion.

Government officials within the police, Interior ministry, Immigration and Parliament were on Thursday tight-lipped about the exact circumstances behind the deportation.

But sources from within the police force and Parliament confirmed that Mr Kihagi, a first-term MP, was among a delegation of Catholic MPs on a regular trip to Rome and then the Vatican to see the Pope.

In Rome officials noticed two curious stamps on his passport.

The stamps were dated October 20 and 24 and had “Amsterdam Schipol” as the place they were issued.

Schipol Airport in Amsterdam, Netherlands, is the main gateway to Europe for travellers arriving from Africa.

The officials crossed the stamps out as well as a visa on his passport bearing his clear image.

The cancelled visa is indicated to have been valid from March 12 this year to April 5, which coincides with the dates on which the delegation of Catholic MPs, which had been cleared to travel, indeed travelled.

Another visa on the same passport was left intact.

It was indicated to have been valid from October 18, 2015 to December 2 the same year.

The images first emerged on Wednesday morning and were later posted on social media – Facebook and Twitter – as well as the messaging app WhatsApp.

Mr Kihagi did not respond to calls  and a text message sent to his publicly available phone number and appeared not to have attended the State of the Nation address last Wednesday as he was not seen in Parliament.