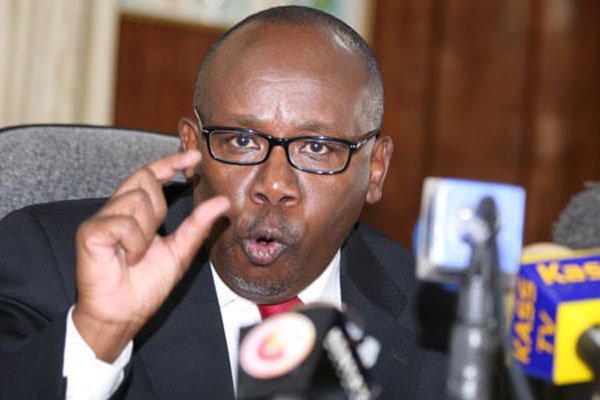 Plans are under way to remove Attorney-General Githu Muigai from office because of his independence, it has emerged.

Top government sources said the Jubilee administration was not pleased with Prof Muigai’s strict application of the law even when it touches on politically driven Bills initiated by the government.

“There is displeasure at the Attorney-General because of his independence. He has refused to take instructions on Bills which are aimed at specific political outcomes,” said the source.

This comes in the wake of the publishing of the Office of the Attorney General (Amendment) Bill 2017. It is set for debate in the House after MPs resumed their last session on Tuesday.

The Bill, an outcome of the recommendations of  the National Assembly’s Justice and Legal Affairs Committee (JLac) two years ago, seeks to establish a procedure by which the AG can be removed from office. At the time, it was argued that while offices such as that of Cabinet secretary have laid down procedures on removal of office holders, it was silent on the AG.

However, what has not escaped keen eyes of observers is that while the Bill seeks to hand the process of removing the AG to Parliament, it cushions the Solicitor-General’s office by making him serve at the pleasure of the President.

This means that while Prof Muigai could be kicked out of office by MPs, it will take President Uhuru Kenyatta to sack Solicitor-General Njee Muturi who has been playing a key role in the crafting of laws that are aimed at achieving political goals.

On Tuesday, JLac chairman Samuel Chepkong’a told the Nation there was no malice in the preparation of the Bill. It also does not target Prof Muigai specifically.

“You know, there is only a procedure for the appointment of the Attorney-General. There is no procedure for his removal in legislation. The legislation was crafted in a manner to suggest the holder is a perpetual holder of the office because there is no clause for removal,” said Mr Chepkong’a.

He said the JLac realised this in 2014 when the Law Society of Kenya asked the National Assembly to initiate the removal of Prof Muigai over his handling of Anglo Leasing matters.

“It was only that the preparation of the Bill took longer than planned,” said Mr Chepkong’a.

Mr Chepkong’a said the Solicitor-General was left out of the Bill because he is the equivalent of a principal secretary and is, in fact, the accounting officer of the State Law Office.

Plot hatched to kick out AG Githu Muigai Reviewed by samrack on January 25, 2017 .