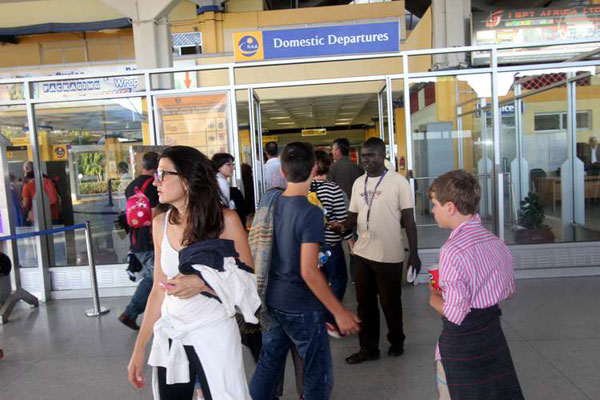 Some of the tourists who were on board the Air France plane at the Moi International Airport as they wait for a new plane to travel to Paris on December 20, 2015. PHOTO | LABAN WALLOGA | NATION MEDIA GROUP

The 473 passengers who were on the Air France plane that made an emergency landing at Mombasa following a bomb scare are being screened as they wait for another aircraft to take them to Paris.

Buses have just made their last trip to the airport from the various hotels that the passengers had been booked in including the Travellers, Whitesands and Mombasa Intercontinental.

The French consul in Mombasa Mohamed Ramadhan has confirmed that the passengers will go home in another Air France plane that has been dispatched from Paris.

“They will not travel in a KQ airplane. They will travel in an Air France aircraft that is expected here around 7pm”, Mr Ramadhan said.

Two Kenya Defence Force fighter jets were seen guarding the ill-fated jet whose emergency doors are said to have been damaged.

Air France chief executive Frederic Gagey said Sunday that the bomb threat that prompted the airline’s plane to make an emergency landing in Kenya had been a “false alarm”.

“The object was not capable of causing an explosion,” Gagey said of the item made up of cardboard, pieces of paper and a timer that was found in a toilet cubicle on board the plane flying from Mauritius to Paris.

Passengers aboard Air France flight No 463 were Sunday morning forced to cut short their trip after the suspicious drive was discovered in one of the plane’s toilets.

After the discovery, the pilot made an emergency landing at the Moi International Airport, Mombasa.

Bomb experts from the Kenya Navy were called and immediately removed the device to safety outside the airport.

The Boeing 777 plane was diverted to Mombasa at around 3am and immediately cleared to land.

All the 473 passengers were screened at the airport lounge and taken to safety in hotels where they were also receiving care and counselling.

Share thisFacebookTwitterPinterestEmailWhatsAppSome of the tourists who were on board the Air France plane at the Moi International Airport as they wait for a new plane to travel to Paris on December 20, 2015. PHOTO | LABAN WALLOGA | NATION MEDIA GROUP Passengers screened as they await new Air France plane to Paris The 473 passengers