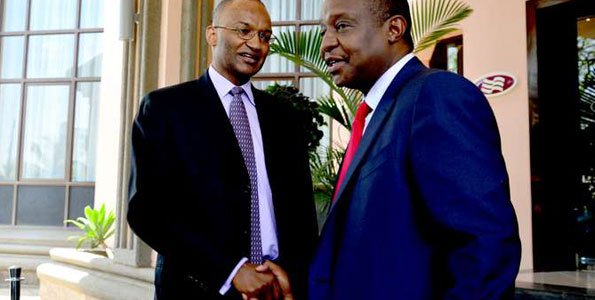 Kenyan commercial banks have steeply increased the cost of loans, leaving their customers with a massive debt servicing burden that was last seen four years ago in the wake of the 2008 global financial crisis.

The increments follow a rise in the cost of government borrowing in past two months as the Treasury’s appetite for money increased with the Kenya Revenue Authority’s failure to meet its revenue collection targets.

Lending rates have in recent weeks risen to highs of 27 per cent from 19 per cent at the beginning of the year following a more than doubling of the cost at which the government is borrowing from the local market — now standing at 23 per cent.

This latest escalation in the cost of loans has dashed any hopes borrowers had in the standard loan pricing tool the Central Bank of Kenya (CBK) introduced last year to protect consumers from arbitrary increase in lending rates.

The bond auction results show that the Treasury is offering investors 23 per cent return on money lent to government for one year up from 10.6 per cent in January, resulting in a steep rise in the cost of funds for commercial banks.

Large depositors have in recent weeks demanded that the lenders match the Treasury’s risk-free rate for deposits, causing a sharp increase in the price of loans for old and new borrowers as the banks move to protect their profit margins.

“Due to the prevailing challenging economic conditions and subsequent tightening of the monetary policy by the Central Bank of Kenya (CBK), it has become necessary for Standard Chartered Bank to review its current pricing mechanism on our Kenya shilling credit facilities.

As a result, effective November 19, 2015 the margin applicable on your credit facility will be increased,” said Standard Chartered in a notice to its customers.

An increase in the cost of a Sh1 million five-year loan to 27 per cent from the previous rate of 19 per cent results to a Sh4,600 rise in monthly instalments that add up to Sh275,000 over the repayment period. Such steep increases in the cost of loans have in the past resulted in a massive increase in defaults and pulled back disbursement of new credit, ultimately slowing down consumption and economic growth.

Commercial banks have responded to that risk by offering to extend loan repayment periods for existing borrowers instead of increasing their monthly instalments and risking high default rates.

Analysts have, however, criticised the extension of the loan repayment periods, arguing that the lenders do not revise the schedules when the rates fall, leaving the borrower at a disadvantage especially where the interest rates increase is temporary.

Current economic conditions do not mirror those of 2011, with the inflation rate standing at 5.97 per cent, within the Treasury’s targeted band, compared to 19.6 per cent four years ago. The common denominator, however, remains a weak shilling and tight liquidity.

The Treasury has been forced to offer high returns on its borrowing to raise money it needs to fund an ambitious budget that came with a Sh229 billion target from local market.

The Treasury raised Sh130 billion between June and September against maturities of Sh170 billion, leaving a 118 per cent gap in its debt management schedule. The more than doubling of the cost at which the government is borrowing from the domestic markets has attracted huge investor interest, leading to massive oversubscriptions of its Treasury bill and bond auctions.

For ordinary citizens, the pain of interest increase also arises from the fact that banks have factored in the loans opportunity costs they incur by not investing in the high-yielding government paper.

Some commercial banks have gone slow on their lending to private companies in favour of the government.

Official statistics show that commercial banks are currently holding 56.1 per cent of total government borrowing from the local market up from 54.3 per cent in January.

Last year, the CBK introduced a standard loan pricing model with the aim of injecting stability and reducing interest spreads that are ranked among the highest globally.

The model allows the regulator to set a common base rate for banks, referred to as the Kenya Banks Reference Rate (KBRR), onto which the banks are allowed to load a premium.

The CBK increased the KBRR in July, following a three-percentage point rise in its indicative Central Bank Rate to 11 per cent.

The regulator’s indicative rate is reviewed every six months but there is an option of adjusting it mid-course in the event of drastic shifts in the macro-economic environment.

The CBK has not reviewed the rate but commercial banks have continued to increase interest rates, making the KBRR irrelevant. The KBRR was introduced mid last year as a compromise between the push to enact laws regulating interest rates and the lenders’ quest to maintain a free hand in the lending market.

“It (KBRR) now seems to be weak in terms of enforcing rates. This is because it now appears the bank can increase the premium at will, implying the CBK has no control,” said Standard Investment Bank head of research Francis Mwangi.

Besides, banks have been increasing the margins under their control quietly by communicating to individual borrowers as opposed to the public announcement they made through advertisements in local newspapers of national circulation.

“Under KBRR, banks don’t have freedom on the base rate which is set by CBK and announced. The premium is based on the individual and so you advise the individual,” said Kenya Bankers Association chief executive Habil Olaka.

Pain for Kenya borrowers as cost of loans rise to new peak of 27pc [VIDEO] Reviewed by samrack on October 26, 2015 .