The process of acquisition of land by missionaries and settlers during the early days of British colonialism in Kenya is rarely clear.

This is because this took place before formal procedures, (as recognized by the government) of land transfer had been put in place. In most cases, the information available today is sketchy and vague at best.But in the case of St. Paul’s Anglican church at Kabete, there is a fairly detailed account of how the land it sits on was acquired in 1901. The following information is gathered from three separate and first hand sources.

In 1900, the missionary Rev A.W. McGregor was sent to start the first Anglican missionary station in the mainland of Kenya. Before then, there had been many missionary settlements from many denominations, near the coast and also in Uganda but not in the vast region in between. His instructions were to start working in Kikuyu land but much of the details were left to him. The work of this missionary and his successor, Canon Harry Leakey, is important. For now however, we shall concentrate on his involvement in the acquisition of the land where the church established a state.

Rev. McGregor arrived at the vicinity of Kabete in 1900. At the time, that was not the name of the location. As part of his responsibilities of establishing the CMS station, he spent a number of months looking for the most suitable permanent location. This search and the decision making process is fortunately documented in a number of letters that Rev. McGregor wrote at the time to his Bishop in Mombasa. 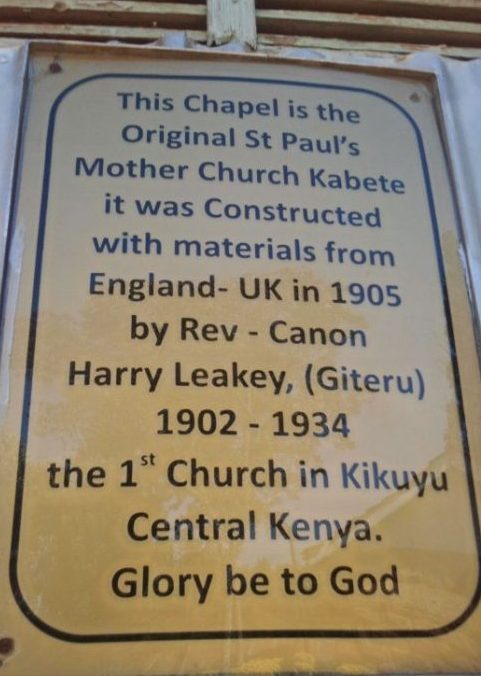 Initially,he considered purchasing Fort Smith from the colonial government which had been falling into disuse because of the establishment of a railway station at Nairobi.In the end, it came to a decision between Fort Smith and a different location at what later became known as Kabete. From reading Rev. McGregor’s letters, it is implied that he decided against Fort Smith simply because Kabete had far more advantages.

In a letter dated May 27, 1901, McGregor summarized the various disadvantages of each site. He loved the site at Kabete because, it had “a perfect … panorama all around”, a “constant water supply” and was in the middle of a large population. The other reasons he found Kabete favorable was that the people around there were “very friendly and wishing to have us around”. So, this was a “splendid field for evangelizing”. For these reasons and others, McGregor selected Kabete.

By May of 1901, the missionary wrote that he had already been in negotiation with the seller of the Kabete land and he expected to pay about 40 goats for the 80 acres. According to Cannon Harry Leakey who was not present but was to arrive soon after, the seller was a certain Chege wa Muthemba, was less than 20 acres and was sold for 45 sheep and goats. Leakey also stated, in 1934 in evidence to the Carter Commission, that Kinyanjui Gathirimu was a witness to the land transaction and that the purchase of Fort Smith was made impossible by the government which decided not to sell it.

There is yet another telling of the story which was recorded in 1936 by Louis Leakey, the archeologist and son to Canon Harry Leakey. While gathering the history of the Southern Kikuyu, Louis Leakey interviewed an elderly man called Kabetu wa Waweru who was familiar with the early history of St. Paul’s church. According to Kabetu, Rev. McGregor bought the land from Chege Kanyi and the seller consulted Kabetu’s family before agreeing to the sale. Kabetu also stated that the land was sold for 43 goats and sheep.