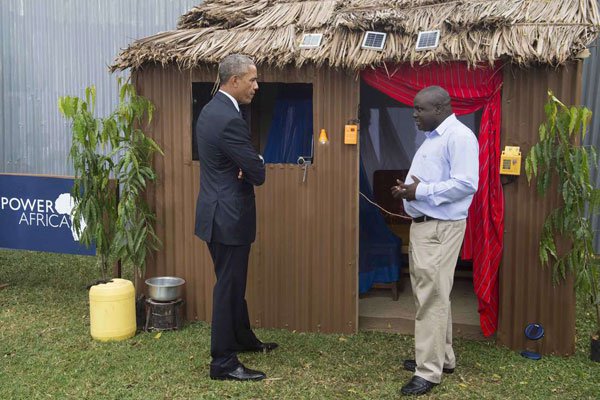 When former American president Barack Obama visits Siaya County in the next three weeks, it will be to a people pregnant with expectation and hopeful of an economic renaissance. The people of the county from which his father hailed will be counting on the sheer force of his celebrity and power to mobilise a change in their fortunes.

Mr Obama will be the guest of honour at the inauguration of the Sauti Kuu Foundation Sports, Resource and Vocational Training Centre, which was started by his sister, Dr Auma Obama. The centre, an ambitious one-stop shop for Kogelo’s youth, will host an international-standard size football pitch, a basketball court, a volleyball/netball court and other facilities including a library, IT lab and vocational centre.

In a statement to the media yesterday, Dr Auma expressed hope that “the space will serve as a safe physical space for children, youth and their families to meet and interact regularly while participating in different sports and learning activities.”

The centre in Alego, Nyangoma, will be inaugurated on Monday, July 16, a day after meeting with President Uhuru Kenyatta and ODM leader Raila Odinga.

“Given that his own mission under the Obama Foundation is to inspire and empower people to change the world, his attendance at this event at our ancestral home, where our father was laid to rest, is of great significance to me,” said Dr Obama.

This will be Kogelo’s moment in the limelight, playing host to a powerful entourage that will also include celebrated TV host Oprah Winfrey and Nigerian tycoon Aliko Dangote.

The village had slipped from the limelight following the end of Mr Obama’s presidency last year. This marked the end of a great time during which tourists flocked in from all over the world to visit the roots of America’s first African-American president. Practically everyone wanted a piece of Mr Obama’s homeland, the place where his father, Barack Obama Senior, was born and brought up, and where is now buried after dying in a road accident.

Although as president Mr Obama did not visit Kenya during his first term, choosing instead to make Egypt his first African destination in 2009, he did visit the land of his father’s birth in his second term. After his visit to Egypt in 2009, he later travelled to South Africa, Tanzania and Senegal in 2013, before he finally made the trip to Kenya in 2015 to attend the Global Entrepreneurship Summit in Nairobi. However, he did not travel to Kogelo at the time.

Before becoming US president, which invariably limited his freedom of movement considerably, Mr Obama visited and enjoyed Kogelo at least twice. His more widely known visit to the village was in 2007 while a US Senator, and was accompanied by his wife Michelle. But the very first time that he visited Kogelo, he was in his 20s, a visit he documents in great detail in his autobiography, Dreams from My Father.

“I remember the rustle of corn leaves, the concentration on my uncles’ faces, the smell of our sweat as we mended a hole in the fence bounding the western line of the property. It wasn’t simply joy that I felt in each of these moments. Rather, it was a sense that everything I was doing, every touch and breath and word, carried the full weight of my life, that a circle was beginning to close,” he wrote in the best-selling book.

Mr Obama had promised in 2015 that he would make a more relaxed visit to Kenya and East Africa once he was out of office.

“I will be back to Kenya next time, maybe not in a suit. I would also come with (my daughters) Malia and Sasha. My family loves Kenya,” he said.

But next month’s is, clearly not the visit he had in mind.

He will not come with Malia or Sasha or even with Michelle, and this rushed visit is as official as they come, his time in Kenya being only a two-day stop-over on his way to Johannesburg, South Africa, where he will give the Nelson Mandela Annual Lecture.

Obama to open Siaya youth centre in July visit When former American president Barack Obama visits Siaya County in the next three weeks, it will be to a people pregnant with expectation and hopeful of an economic renaissance. The people of the county from which his father hailed will be counting on the sheer force