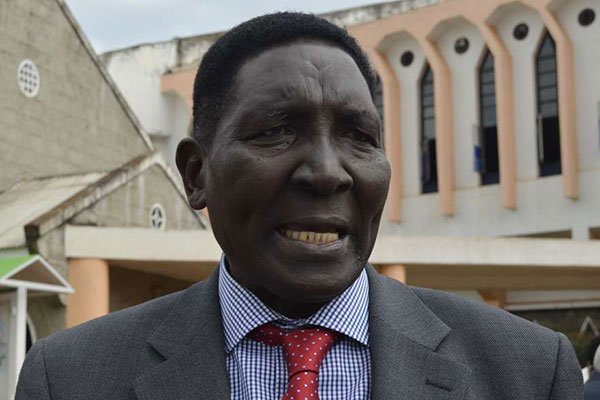 Lawrence Nginyo Kariuki, a veteran politician and a champion for multiparty democracy, has passed on at the Aga Khan University Hospital, the family has announced.

Mr Kariuki, who was also a businessman, had been ailing for some time. He died in the wee hours of Monday morning.

He was a founding member of The National Alliance (TNA), which was at the helm of power between 2013 and 2017.

The family and hospital remained tight-lipped on what was ailing the politician, but he looked frail in his last public appearances in 2018 when opposition leader Raila Odinga paid him a visit at his home in Kiambu.

TRIBUTES
President Uhuru Kenyatta, in his message of condolence, described Nginyo Kariuki as an astute businessman and serial entrepreneur.

“Kenya has lost a great patriot and a business icon who believed in the Kenyan market. As an entrepreneur, Mr Kariuki’s businesses created thousands of jobs for our youth,” Mr Kenyatta said.

Moses Wetang’ula posted on his Twitter account: “I have learnt with shock and sadness of the passing on of Nginyo Kariuki. He will be remembered for his courageous and relentless struggle for the restoration of multiparty democracy and constitutional reforms. R.I.P”.

My Kariuki vied to be the Member of Parliament for Kiambaa, Kiambu, in the 80s.

Alongside the late firebrand politician Kenneth Matiba, he was a staunch campaigner for multiparty democracy in Kenya.

The life of the prominent businessman, among the wealthy barons in Kiambu County, was a textbook rags-to-riches story.

Mr Kariuki had invested in real estate: He owned Nginyo Towers in Nairobi and the Lenana Mount Hotel.

Some of his properties, however, were a source of headache for the businessman.

In 2018, the tycoon took Green Plots Properties — run by George Ndegwa — to court for fraudulently sub-dividing and selling off his land in Kajiado which he said he bought from his sister Rose Wanjiru in 1989.

Nginyo was one of Africa’s pioneer golfers, having established the only golf club in the country to be started by an indigenous African back in 1963.

He founded the Ndumberi Golf Club, popularly known as “St Andrews”, to enable Africans and Asians to play the game which was then exclusively for the white community.

He initially began as a caddy before rising to the top of Kenya’s golfing circles.

“The founding of Ndumberi Golf Club was critical as it paved the way for clubs affiliated to Kenya Golf Union (KGU) accept selected Africans and Asians to join as members,’’ said Kariuki at a past golfing event.