by samrack
in Diaspora, Nepal, US, Video News
A A
0

By : Roshana Ghimire From Napal now living in Boston,Massachusetts

April 25 2015, Saturday became a black day for Nepal in a history. 7.9 magnitude of earthquake hit the Kathmandu; the capital city and other surrounding valleys and took the life of thousands of people (more than 7000 but not the accurate data) and more than 14000 were injured. Kathmandu, Bhaktapur and Lalitpur are the three cities where there are numbers of historic temples and buildings. Basantapur durbar square of Kathmandu, Bhaktapur Durbar Square and Patan Durabar Square are the ancient places in those cities which are listed in the world heritage. But our misfortune; those three cities along with the temples and buildings of world heritage are being collapsed by the earthquake. The effects of earthquake is so devastating that millions of people have lost their homes, children have lost t!heir parents, fathers have lost their sons and daughters and thousands are injured!

It is unbearable and breathtaking to just see the photographs of buildings turned into rubbles, watch the buildings and temples being collapsed and peoples being trapped, buried and killed.

At present, more than one million people of Nepali origin live in countries other than Nepal. “In the U.S. alone, every year about 10,000 Nepali students enroll in various universities to pursue degrees in business and management, engineering, math and computer science, physical and life sciences and social sciences. After completing their studies, many students seek work in their host country.” 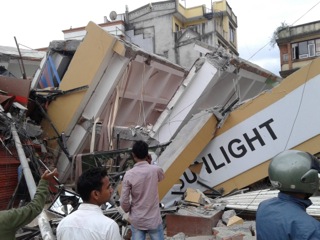 Now there is a large pool of qualified Nepali professionals in the U.S., and in many other countries. Rather than view Nepal’s emigration as a loss, it is time that we embrace the potential of the Nepali diaspora to provide new hope for the future of Nepal.

NEPAL, has a history of more than 2000 years, a small landlocked country, rich in the natural beauties, the mountains, lakes, fountains, flora, landscapes, rivers, the words will be insufficient to describe and include all about the Nepal’s beauty and its climate. 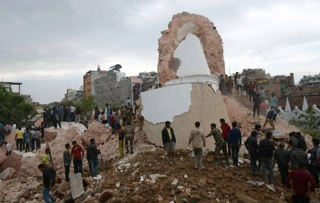 As a Napalese being away form my country, from home and from the families in this type of  devastating situation is very painful. The Earthquake/natural disaster is inevitable and cannot be prevented or stopped to occur but the effects of those devastation is really unexplainable and unbearable.

When I received the call from Nepal, it was 3AM in the morning here in Boston, USA. It was a cousin of my friend who gave us the sad news about Nepal. Since then I kept on trying to call my people but the calls were not getting picked up.Internet was down in Napal, so we could not communicate with anyone via the web.

However, after 4 hours of continuos effort I was connected with my sister and knew that everybody in my family were fine, but my grandfathers and four of my aunts house had collapsed.

My Naplaese,husband called his family and they were also fine. I don’t know how I spent those four hours. My mind was racing,i was  loosing my mind,sudenly i  became cold and started shivering.

Then rest of the days were dark for me because my family and my  people were sleeping in the open field in Nepal,I felt helpless.There were Earthquakes aftershocks, coming frequently and causing  more devastation,I felt i could not hold it anymore.

After 3 days,the  some people  went  back to their  houses and some were lucky to find their houses somehow intact,But remained scared anything could happen.As write, there are still, a large numbers of people who have lost their houses are still in the field/ground with their tents, provided by the government and donated by various  volunteer agencies, without food and other basic necessities.

Several countries have sent their rescuers, Doctors, Nurses, Volunteers along with the necessary equipments and excavation and construction tools.

We Nepalese living outside the country are also trying our best to backup our people and country back home by raising funds and other essentials. I am  thankful to all the people of the World,for showing the empathy towards Nepal and Nepali and helping us voluntarily by DONATING the money. Every dollars counts and a US dollar is almost hundred in Nepal so it can go a long way in helping its people and  hopefully it  can  help to rebuild Nepal.

Kenya Takes on Its Own Worst Enemy

Kenya Takes on Its Own Worst Enemy