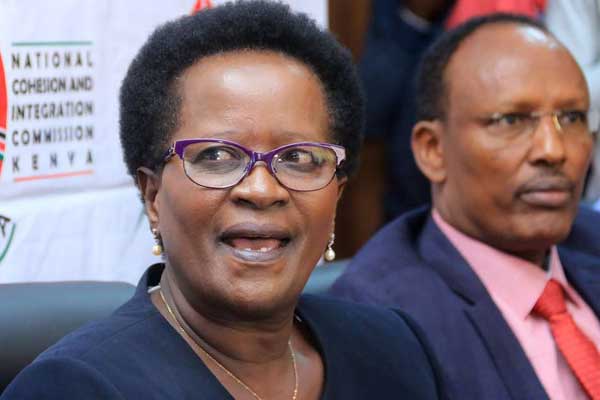 The National Cohesion and Integration Commission (NCIC) has echoed sentiments by European Union election observers about possible political violence and asked the electoral body to discharge its mandate effectively.

“There is a serious risk of violence because politicians are beating the drums of war but we can stop this if all of discharge our responsibilities as required under the law,” said NCIC vice-chairperson Irene Wanyoike at a press conference on Tuesday.

She was accompanied by commissioners Roba Sharamo and Adan Abdi Mohammed. The statement was signed by chairman Francis ole Kaparo, who did not attend the briefing.

She, however, clarified that raising the red flag does not confirm that there will be violence, saying there is hope for peace if Kenyans refuse to be misled by politicians.

Among the things the commission has flagged are the widening ethnic and political polarisation and increased use of inflammatory statements largely characterised by inter and intra-ethnic profiling by the political class and their supporters.

This, the commission noted, has resulted in political hooliganism and violence in some areas.

They also identified hate speech on vernacular radio stations and social media and what they describe as “notable insensitive and sensational reporting by a section of the media”.

As a consequence, the commission has urged politicians to conduct their campaigns in a responsible manner and refrain from hate speech, ethnic incitement and use of inflammatory and abusive language and other acts that may divide the country.

It further wants the political parties and candidates to focus on issue-based campaigns and peacefully share their political agenda that will allow Kenyans to make a free choice.

“The commission notes that issue based politics will deepen democratisation and enhance long term stability, peace and development for Kenya,” Ms Wanyoike.

The commission has received about 30 complaints from the public, which Ms Wanyoike said had been investigated and the files handed over to the Office of the Director of Public Prosecutions.

She called on the media to embrace conflict-sensitive reporting and avoid stirring political emotions that may trigger violence as Kenyans prepare to vote on August 8.

The commission has in the past named 19 counties as hotspots for violence during the election.