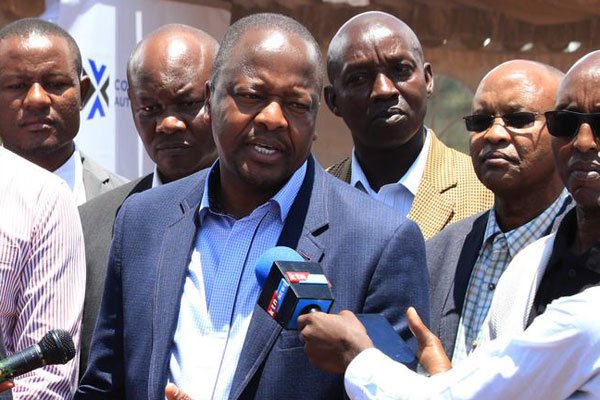 Nyeri Senator Mutahi Kagwe addresses reporters at Njiruini Secondary School in Nyeri on March 31, 2017. He has strongly objected to Nasa’s plan to have its own tallying centre on election day in August. PHOTO | JOSEPH KANYI | NATION MEDIA GROUP

Jubilee Party leaders have lashed out at the National Super Alliance (Nasa) for planning to have parallel tallying centres during this year’s elections.

They also said such an action will make the country relapse into chaos just like after the 2007 General Election.

“We have never heard a candidate who says he will have his own tallying centre and declare his own results,” Mr Kagwe said.

“We are sending a stern warning to one Raila Odinga, he is in no capacity to have his own tallying centre, which is illegal, or declare who wins the election or not.”

On Sunday, Mr Odinga, also leader of ODM, which together with the Wiper Democratic Movement, Amani National Congress and Ford-Kenya form Nasa, said the coalition will count the results and compare them with those by the Independent Electoral and Boundaries Commission.

“IEBC will announce their results … and we will announce ours from our tallying centre for comparison. We will not accept fake results as happened in 2013 at Bomas of Kenya,” he said during a rally at Joseph Kang’ethe Grounds in Kibra, Nairobi.

The announcement prompted a sharp warning from the electoral body, with chairman Wafula Chebukati making it clear that only his agency has the mandate and authority to tally election results.

Similarly, Mr Kega said Nasa intends to disrupt peace and that Jubilee will not allow it.

He said Jubilee will strive to win again by having President Uhuru Kenyatta re-elected.

“He will not destroy the country’s peace like it happened in the 2007 General Election. We are ready to defend the government and win by 70 per cent,” he said.

He said the Opposition should focus on cardinal matters at hand such as selecting their presidential flag-bearer.

Mr Kagwe also urged people to turn out in large numbers during the Jubilee primaries on April 21.

They were speaking during the commissioning of the Ndiriti-Aguthi water project funded by the National Drought and Management Authority at a tune of Sh5.5 million to facilitate irrigation.