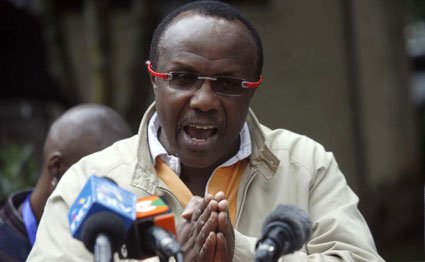 The whereabouts of National Super Alliance (Nasa) head of policy David Ndii remains unknown as the police and the coalition are giving conflicting accounts.

Whereas Nasa announced that Dr Ndii had been arrested at Leopard Beach Hotel in Kwale, the police in the county discounted the claims saying they did not have any person bearing such a name in their custody.

The news of Dr Ndii’s arrest was broken by Mr Dennis Onyango who is Nasa Leader Raila Odinga’s spokesman.

It is believed that Dr Ndii was arrested at around 5pm in an operation conducted by officers drawn from the Flying Squad and the Special Crime Prevention Unit through the coordination of the Kwale county office.

At about 9.49pm on Sunday, Mr Onyango delivered another post on his handle, saying the police had confirmed the arrest and that they were holding Dr Ndii at Diani police station.

“They want to go back to his Leopard Beach Hotel in Kwale and pick computer and laptop for the information they need,” Mr Onyango post read in part, even though he did not reveal the nature of information the police are seeking.

Winnie Odinga, who is the daughter of Nasa leader, was spotted at Diani police station at around 9.30 but she complained the police did not want to talk to her.

However, she said at around 9.45pm several unmarked police cars detoured at the station and she believes that is the time Dr Ndii was sneaked out.

Dr Ndii’s family members have reported that police picked up the economist at the Leopard Beach area of Diani on the south coast.

Nasa flagbearer Raila Odinga’s adviser Salim Lone has said that Dr Ndii’s family was told that he had been taken to the Diani Beach Police Station only for the police to say that the economist was not at the station. No reason was given for his arrest.

However the Nasa leadership insisted that the arrest is linked to be the economist’s role in the formation of the People’s Assembly which the coalition says is the final pillar in the restoration democracy and electoral reforms in the country in the aftermath of what it says are two bungled presidential elections.

Mr Ndii has been a critic of the Jubilee administration for the last four years.

On Friday, Nasa picked him to lead the seven-member organising committee that is expected to deliberate on and produce the road map towards restoring democracy, just government and legitimate leadership through the People’s Assembly.

The details of the meeting which took place at Nasa’s Okoa Kenya offices are scanty but it is believed it was chaired by Dr Ndii.