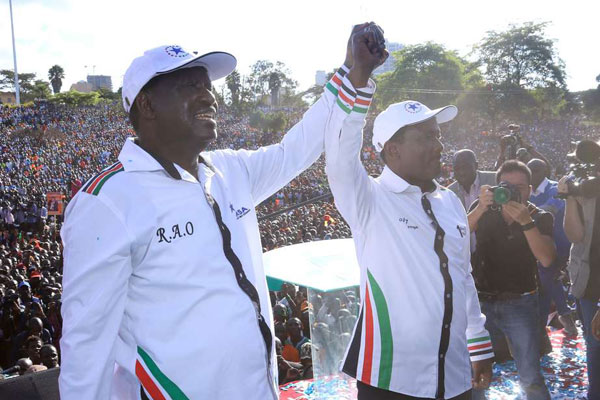 The National Super Alliance (Nasa) leaders have released documents they say link Kenya’s military to a rigging plot by the ruling coalition Jubilee ahead of the August 8 General Elections.

Nasa presidential candidate Raila Odinga claims the seven documents, some appearing to show deployment plans, are evidence of a Jubilee Party plot to use the military and extra ballots to rig the poll.

Addressing reporters in the presence of his running mate Kalonzo Musyoka on Friday, Mr Odinga claimed military officials held a secret meeting on the plan at State House.

The documents, he said, were a follow-up to the meeting.

The leaders suggested that they would not take part in the poll if they are not assured of fairness.

“So, we are now being forced to go into an election whose outcome is already determined. We are not that stupid,” Mr Odinga said in a press briefing at Sarova Panafric Hotel in Nairobi.

“We will not, until we get full confirmation that we’re going to have a truly democratic and transparent system, and that every Kenyan is going to be allowed to cast the ballot; and only ballots cast by registered voters will count, not dead voters, not other ghost voters who have been invented by Jubilee elsewhere. This is not negotiable at all.”

However, a statement from the coalition moments later clarified that Mr Odinga’s words did not amount to a threat to boycott the elections.

The statement by spokesman Salim Lone said, “Nasa issued no such threat. Media is welcome to speculate on that score, but it cannot ascribe to Nasa what was never said or hinted,”

During the press conference, Nasa leaders gave journalists the documents with details of the plans, including the names and telephone numbers of some officers.

One of the documents, claimed to be from the Kenya Army, is dated July 17 and marked “secret” in the header.

The Nation could not immediately establish the authenticity and source of the documents, some of which are replete with military jargon and codes.

But Mr Musyoka alleged that some of the military actions would include disconnecting mobile networks, electricity and water in Nairobi slums.

According to Nasa leaders, loyal Army officers and fresh recruits will be used to rig the poll to make it hard to identify them.

Mr Musyoka read out the names and contacts of army officers he claimed would be point men in central Kenya, Mr Kenyatta’s home region and perceived stronghold.

The opposition has on several occasions accused President Kenyatta of plotting to rig the poll using the Kenya Army.

But Mr Kenyatta and his running mate William Ruto have dismissed the claims, accusing Mr Odinga of looking for scapegoats because “he is not ready” for elections.

Mr Kenyatta and Mr Ruto recently alleged Mr Odinga had resorted to making unsubstantiated and wild claims of poll rigging after failing to slam breaks on the elections through courts.

And a few minutes after Mr Odinga issued his statement on Friday, Mr Kenyatta and his deputy hit back, saying the Nasa leaders were not interested in the elections but in a coalition government.

“Now they are telling us the security organs are interfering with elections. I want to tell you, shame on you Mr Odinga,'” President Kenyatta said at the Kapsabet Showground during a Jubilee rally.

“You are a senior politician of this country and you want to drag the security people who are dedicated to serving this country into your petty politics.”

Mr Ruto dismissed the Nasa threat to boycott the elections, saying, “It is not a must they participate.”

“If you do not want to be part of the elections stay at home — Kenyans will still decide who to vote for,” he said.

“Our opponents know they cannot be elected because they have no track record. They did not build the SGR, they have not constructed any roads, what record do they want to be elected on?”