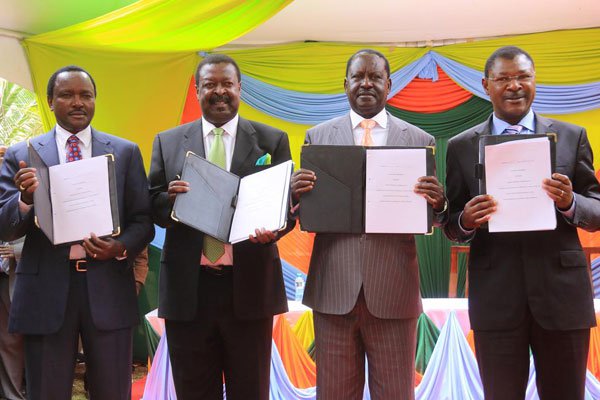 Opposition leaders on Wednesday launched a unity agreement but without key elements of a power sharing formula.

They left open the possibility of amending the Constitution to create more positions in government but cautiously kicked down the road the thorny issue of who gets what.

Also notable at the launch at the Okoa Kenya offices in Karen was the absence of the usual grasping and triumphant lifting of hands, and the sober faces of the National Super Alliance seemed to indicate the difficulty of the negotiations ahead to pick a presidential candidate.

The Nasa coalition agreement, later in the evening submitted to the Registrar of Political Parties, is also a death certificate for the Coalition for Reforms and Democracy (Cord), which will be dissolved at the end of the current parliament.

A copy of the agreement, which was obtained by the Nation, spells out the framework of management of the Nasa. All the parties previously coalescing under Cord will now join the Amani National Congress in the new alliance.

In article five, the coalition agreement indicates the intention of the alliance to create more positions in government if it wins the election, including the possibility of amending the Constitution.

It talks of refining the Constitution, strengthening devolution, including sharing and transfer of more functions and resources to the county governments. “And to achieve more inclusive electoral system and better align the political system to our social and political realities,” the document reads.

The unveiling of the coalition agreement signalled that the 2017 presidential race is taking shape.

Cord, Mr Odinga’s vehicle in the last election, has been an effective unifying force for the election over the past four years.

Nasa is designed along the same lines as the National Rainbow Coalition that defeated Kanu in 2002. The top organ of the party will be the summit, and will comprise party leaders of the four founding parties ANC, ODM, WDM-K and Ford Kenya.

The agreement also created the National Coordinating Committee with members from the four parties but giving room for admission of other members.

“The summit shall originate or give policy directions for the coalition and on its motion on the advice of the NCC admit its own members,” states the agreement.

Though it doesn’t expressly bar parties from fielding their own candidates, the agreement advocates joint nominations for parliamentary, gubernatorial and county assembly seats conducted by the coalition election board.

Said the agreement: “The coalition may in special circumstances allow more than one coalition candidates in its strongholds provided it is adjudged that such competition will not undermine support from the coalition’s presidential candidate.”

No details of a power sharing arrangement were given, even though such an agreement is said to have been reached.

POWER SHARING
The power sharing clause only addresses peripheral issues without directly touching on key positions, but it is expected that an addendum will be introduced later. “Power sharing will be based on the following criteria: founder members status, portfolio balance and performance,” the agreement said.

“Powers will be shared in executive appointments, legislative offices, national government appointments and leadership positions in the legislatures that the coalition is entitled to,” the agreement states.

The signing came just days after the conclusion of voter registration, with numbers showing that both the opposition and the government sides have a good chance of winning the election.

Mr Odinga said the new entity’s main political agenda is to ensure the restoration of the rule of law and to create a corruption-free government that will deliver and fight social injustices, poverty and negative ethnicity. He said he hoped the new coalition will deliver, adding that those who thought it was a mirage will be shocked.

“They said opposition unity was a mirage but today we are here to fulfil the promise that we made to Kenyans we will come together and form one huge political coalition,” Mr Odinga said.

He urged Kenyans to patiently wait as the coordinating team continues to work on the power sharing deal which will guide the coalition in picking the Presidential candidate.

Mr Odinga said a united Nasa was on its way to victory and announced the coalition will hold its first rally in Eldoret town on Saturday.

“We want to build a new Kenya where our youth will be fully liberated, where inclusivity is the order of the day, where everyone has equal opportunities,” Mr Odinga stated.

Mr Mudavadi, who is behind the formation of the coalition, expressed joy that the outfit had been adopted by the country and had suddenly become a household name around Kenya.

“When I started talking about Nasa, caricatures were drawn to disparage me. But today I am happy to announce that Nasa is real,” Mr Mudavadi said.

The coalition will ensure there is no rigging, he said, adding that Nasa had detailed power sharing arrangement and dismissed those arguing that the coalition leaders were only interested in seizing power for personal gain.

“In the document we talk about power sharing. Nasa is not a movement to monopolise power,” he said.

Mr Wetang’ula, who read a joint statement on behalf of the Nasa team, spelt out seven pillars on which the coalition’s policy would be hinged.

“The economy is unable to create opportunities for millions of our young people. In four short years, the Jubilee administration has succeeded in disconnecting the economy from the welfare of the people. We are told that the economy is growing spectacularly as life gets harder, a record number of companies are issuing profit warnings and laying off people,” said Mr Wetang’ula.

To deal with corruption under a Nasa government, the coalition has come up with a code of ethics that bars government officials from doing business with the state.
Mr Wetang’ula said the Nasa president will take responsibility in the war against corruption, adding that blame game will no longer be tolerated.

Mr Musyoka warned that Kenyans should be wary of the Independent Electoral and Boundaries Commission until the rot within it was expressly dealt with.

“Let us be cautious in the manner with which we are dealing with the IEBC. The commission is rotten,” Mr Musyoka claimed.

He said that a voter register audit must be implemented in a professional manner and argued that a new competent firm must be procured to undertake the exercise.

“We say no to KMPG. The culture of free and fair elections must return to this country. We urge IEBC chairman Mr (Wafula) Chebukati to deal decisively with internal rot that could spoil the coming elections,” he said.