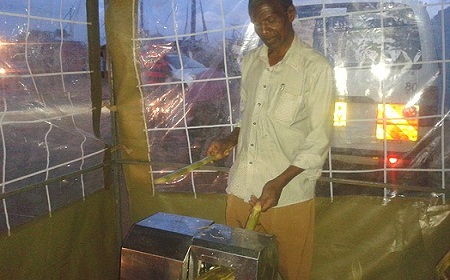 There has been a craze over sugarcane juice in the last few weeks as more and more vendors set up what has come to be known as the most lucrative business in town.

The juice that is said to possess more health benefits than other fruit juices and has gotten people queuing to get a glass.

In Nairobi’s Kasarani area, a businessman, Jotham Kanja became the first person to sell the famous juice in the area five months ago.

“It all started when I saw the sugarcane juice making machine being sold online and I researched on how it works,” he said during an interview with Nairobi News at his premise.

The machine squeezes and extracts all the juice from the rind (cover) and flesh and produces a concentrated solution.

“To add some taste to the cane juice, we cut it in two pieces along its length and place halved lemons and ginger then close it up before feeding it in the machine for the juice to be extracted,” explained Mr Kanja.

A small glass of the juice that is light green in color retails at Sh20, while a big one goes for Sh50 at his premise.

“Since we do not remove the sugarcane rind when making the juice, it has more nutrients than the normal juice people suck out of the flesh after the cover has been chopped off,” said Mr Kanja.

Mr Kanja is not in this business venture alone. He has managed to employ nine people to help in running his three juice selling joints in Kasarani, Hunters and Sunton area.

His branches are a simple set up of a tent housing the machine, sugarcane, jugs and cups and a few plastic chairs for customers.

When Nairobi News visited the Kasarani branch customers were queuing, getting a glass of juice and leaving with it while others sit on the available seats to enjoy their drink.

He started with a capital of Sh170, 000 that he used to purchase the machine, power it and buy sugarcane stems and disposable cups.

He gets a return of Sh10, 000 daily from each branch after expenditures.

According to medindia.net, a health website, sugarcane juice is loaded with glucose and electrolytes that make it an energy booster.

It relieves burning sensation caused by urinary tract infections (UTI) and is one of the best home remedies for cold and flu.

Studies have also found out that flavones present in sugarcane juice combat production and spread of cancerous cells, particularly prostate and breast cancers.

It also protects the liver from damage and incase of liver jaundice it speeds the recovery process.

Sugarcane juice has in the past been popular in Kisumu and Mombasa due to the hot weather experienced there and its ability to re-hydrate the body.

How to Make Sugar Cane Juice

Share thisFacebookTwitterPinterestEmailWhatsAppJotham Kanja demonstrates how the juice maker operates. Nairobi’s new craze: Making KSh10,000 per day selling freshly squeezed sugarcane juice There has been a craze over sugarcane juice in the last few weeks as more and more vendors set up what has come to be known as the most lucrative business in town. The