Mutyambai: This is my promise to Kenyans 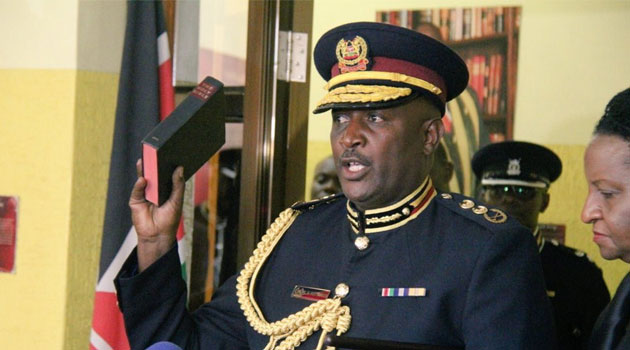 Mutyambai has promised to work closely with all security agencies to ensure justice is expeditiously delivered, a move that will also seal any loophole within the criminal justice system/CFM NEWS

Mutyambai: This is my promise to Kenyans

By JOSEPH MURAYA, NAIROBI, Kenya, April 18 – On day one in office as the third Inspector General of Police, Hillary Mutyambai is fully aware of the task ahead of him.

An onerous task it is, Chief Justice David Maraga cautioned him, shortly after he was sworn-in to office.

But IG Mutyambai has vowed to face head-on the myriad of challenges facing the country ranging from terrorism, corruption (economic crimes) as well as overseeing implementation of the pending police reforms.

As he assumes office, the Inspector General has painted a picture of confidence as he made a set of promises amidst high expectations from Kenyans and specifically right groups, who hope he will put an end to the culture of extra-judicial killings and forced disappearances.

“I reiterate my commitment to be a team player. I am ready to work with people of goodwill and all stakeholders in the security sector so that we can provide public safety to Kenyans,” he said.

In an inclusive approach, Mutyambai has promised to work closely with all security agencies to ensure justice is expeditiously delivered, a move that will also seal any loophole within the criminal justice system.

Some of the security challenges on his radar include organised crime, terrorism, corruption, and cattle rustling.

“Enhancing our collaboration and multi-agency approach still remains the best way to tackle these contemporary challenges. I want to promise that we will deepen our working relationship with partner security agencies and the criminal justice system, to ensure that those who break the law, have served justice in a fair manner,” he stated.

On police reforms, he committed to carry on with what his predecessor started but this time, he said his focus will on transforming police stations, “to a centre of delivery for policing.”

Other than renovating dilapidated police stations, the IG also wants to build more to ensure all Kenyans are within a range of police reach.

The police service has since embarked on a digitization programmed dubbed the ‘National Police Service Information Management System’.

All the biometric data of members of the police service have been captured, while the digitisation of the Occurrence Book is set to start soon.

“This will help members of the public to track the process of their complaints and enable them to give us feedback on the same,” the IG said.

He also promised to lobby for enhanced welfare for police officers that will include construction of the National Police Service hospital.

In what is likely to cause excitement among rights group working on police reforms, the IG said he intends to decentralise the services of police Internal Affairs Unit (IAU) which is currently headquartered at KCB Towers in Upper Hill, Nairobi.

Through IAU, he undertook to fight corruption within the police service by, “initiating a system that will enhance accountability and responsibility.”

IAU has the mandate of receiving and investigating complaints against the police, promoting uniform standards of discipline and good order in the service and keeping a record of facts of any complaints or investigations made to it.

IAU has since developed the Anonymous Reporting Information System the helps Kenyans to report without fear of being victimised.

Under the system, Kenyans can send a toll-free message on 40683 or call 0800721230 after which they will be provided with a tracking code for their complaints.

One can also download the Anonymous Reporting Information System application on their Android phones.

While he pledged to protect the rights of police officers, the IG warned those who misuse their power and more so by executing suspects of crime.

According to the Independent Medico-Legal Unit (IMLU), police have executed 25 people since January this year.

“I will endeavour to make sure all police officers respect human rights and fundamental freedoms as enshrined in the Constitution,” he asserted.

He was speaking after being sworn-in the presence of the Chief Justice who cautioned Mutyambai that what was ahead of him was, “an onerous task.”

All agencies within the criminal justice system were represented, including former IG Joseph Boinnet.

Boinnet said he will walk out of the top office within the police service a satisfied man saying “I did the best I could in maintaining law in the country as well as confronting serious security challenges like terrorism.”

The latest was on January 15 when armed terrorists blasted their way inside the 14 Riverside Drive complex killing 21 in the siege.

Quick response and a more coordinated approach was witnessed, a departure from what happened on September 21 in 2013 during the Westgate mall attack, that left 67 people dead.

Boinnet was however criticized by human rights organisations of failing to stop cases extra-judicial killings and enforced disappearances.

Mutyambai: This is my promise to Kenyans Reviewed by samrack on April 8, 2019 .

Share thisFacebookTwitterPinterestEmailWhatsAppMutyambai has promised to work closely with all security agencies to ensure justice is expeditiously delivered, a move that will also seal any loophole within the criminal justice system/CFM NEWS Mutyambai: This is my promise to Kenyans By JOSEPH MURAYA, NAIROBI, Kenya, April 18 – On day one in office as the third Inspector