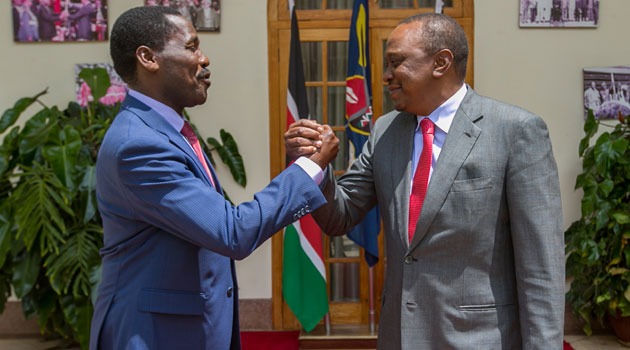 The petitioner also questioned Munya’s suitability to market the official Kenyan policy on issues of regional integration after he sparked off a diplomatic controversy between Kenya and Somalia after he visited Somaliland, a breakaway region yet to be recognised internationally, ostensibly to promote easier regulations on miraa from his county/FILE

East African Community and the Northern Corridor Development Cabinet Secretary nominee, Peter Munya, is among four individuals whose fate hangs in the balance after the National Assembly received petitions challenging their nominations over integrity, misappropriation of funds and abuse of office claims.

Kennedy Echesa Lubengu, a resident of Kakamega, says Munya should not be allowed to serve in the position because he was among the 175 people who were under investigation for corruption named by President Uhuru Kenyatta during his State of the Nation address to Parliament in March 2015.

“I am aware of the fact that Uhuru Kenyatta, President of the Republic of Kenya directed that all officials of the National and County Governments adversely mentioned in the said report, whether Cabinet Secretary, Principal Secretary or Chief Executive of a State Institution were to immediately step aside pending conclusion of investigations by the Ethics and Anti-Corruptions Commission.”

“I am aware of the fact that Hon. Peter Gatirau Munya Governor for Meru County (as he then was) was adversely mentioned at page 35 of the aforementioned EACC report and accused of among other things, allegations of abuse of office and misuse of public funds on fuel, service and repair of a private vehicle,” reads the petition in part.

The graft purge suffered a huge blow last year after the State was forced to withdraw 125 cases after a three-judge bench held that the Ethics and Anti-Corruption Commission (EACC) was not properly constituted at the time it was investigating the graft cases due to absence of Commissioners and all cases investigated and forwarded to the then Director of Public Prosecutions during that period were invalid and unlawful.

The petitioner further argues that Munya has violated the provision of the Constitution, County Government Act, Leadership and Integrity Act and the Public Finance and Management Act.

The petitioner also questioned Munya’s suitability to market Kenya’s policy on issues of regional integration after he sparked off a diplomatic row between Kenya and Somalia after he visited Somaliland, a breakaway region yet to be recognised internationally, ostensibly to promote easier regulation on miraa from his county.

Munya met with Somaliland Deputy President Abdurrahman Ishmael, the Foreign Affairs Minister and his Finance counterpart, where he reportedly offered to lobby for the region’s international recognition in exchange for freer miraa deals.

This irked Mogadishu, which in turn temporarily banned miraa exports to those regions, and accused Munya of meddling in their affairs.

Meanwhile, media consultant Blamuel Njururi wants Parliament to reject Keriako Tobiko’s nomination on grounds that he has no passion for the environment or wildlife.

“Today I submitted petition urging the National Assembly to refrain from approving the appointment of Keriako Tobiko as Cabinet Secretary based on his record as a man who has devoted his life to the destruction and degradation of Maasai Mara Forest and National Reserve,” he said.

The Committee on Appointments under the chairmanship of House Speaker Justin Muturi confirmed it has received five affidavits in respect of the four affected Cabinet nominees.

Muturi directed the Munya, Tobiko and the two other nominees be notified of the same to allow them to respond when they appear before the House team on Thursday and Friday.

The petitioner also questioned Munya’s suitability to market the official Kenyan policy on issues of regional integration after he sparked off a diplomatic controversy between Kenya and Somalia after he visited Somaliland, a breakaway region yet to be recognised internationally, ostensibly to promote easier regulations on miraa from his county/FILE Munya among CS nominees facing