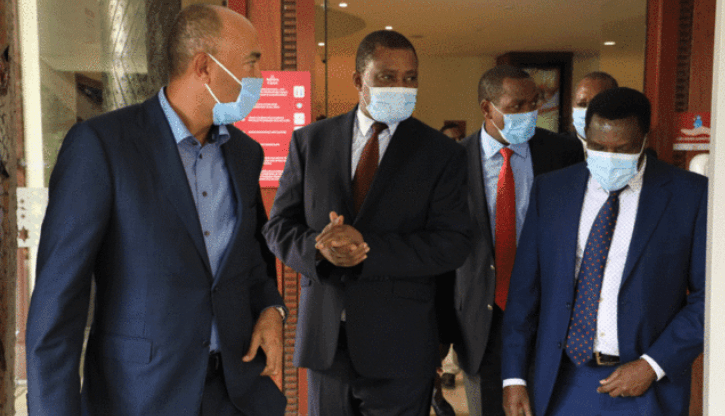 Pro-Building Bridges Initiative (BBI) leaders from the Mt. Kenya region have unveiled team that will lead campaigns to popularize it.

This came just a week after Muranga Senator Irungu Kang’ata wrote to President Uhuru telling him that the process was unpopular in the region.

According to a report by People Daily, the five-member team, which was unveiled after a three-hour closed-door meeting in a Murang’a hotel on Saturday, January 9, will be led by Kirinyaga senator Charles Kibiru.

While addressing the media after the meeting, National Assembly Majority Leader Amos Kimunya said that the team shall spearhead the process of educating the people from the region on the contents of the BBI.

Other members of the team include Embu Woman Rep Jane Wanjuki who will be the secretary, Limuru MP Peter Mwathi as organising secretary and his Kigumo counterpart Ruth Mwaniki as assistant organizing secretary.

According to Kimunya, lacks adequate information on BBI document has caused confusion among the people.

He said they shall do massive sensitization to the people before a referendum is conducted sometime this year.

“We want people to understand what is contained in the document and the benefits they stand to gain from it,” said Kimunya.

“If people get to know the content of the report, then they will understand why we are telling them to support it,” he added.

Kimunya added that the Mt. Kenya leaders have agreed to work as a team and out of the 91 leaders from the region, only 15 are not working with them but efforts are made to pull them back.

Kibiru blamed anti-BBI leader whom he said are working hard to misinform people about the BBI to discredit and make it unpopular in the region.

He said his team shall reach out to governors, MCAs, church and opinion leaders to help in educating people about it.

“We shall use all available platforms to teach people about it because we want them to understand what it entails,” he said.

Share thisFacebookTwitterPinterestEmailWhatsAppMt. Kenya Leaders Unveil BBI Campaign Team Pro-Building Bridges Initiative (BBI) leaders from the Mt. Kenya region have unveiled team that will lead campaigns to popularize it. This came just a week after Muranga Senator Irungu Kang’ata wrote to President Uhuru telling him that the process was unpopular in the region. According to a