Renowned actor, Ainea Ojiambo, who was involved in a shooting on Moi Avenue, Nairobi on Friday, April 30, is not only a filmmaker but also a private military contractor and top marksman.

Ojiambo was captured on CCTV camera firing at two goons who accosted him on the streets. The duo attempted to rob him of his jewellery and other valuables.

A security guard and a passer-by were hit by two stray bullets with the former succumbing at the spot and the latter rushed to hospital for emergency treatment. The two muggers, nonetheless, managed to scamper for safety. 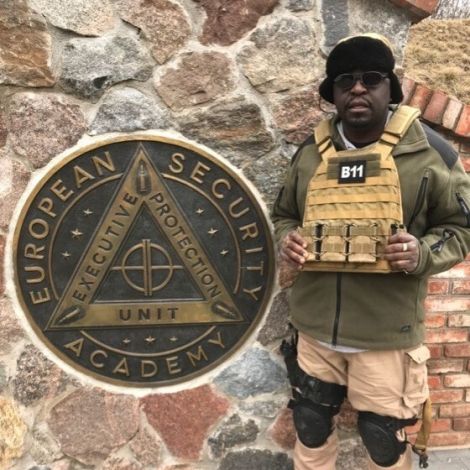 Ainea Ojiambo, a security consultant and a member of the International Bodyguard Association (IBA)

The film producer renowned for starring in The Constant Gardener, Bullion and Jack Zollo: My Life in Crime is a licensed gun holder and a protection specialist.

“I have done a course on Close Protection and I am a member of International Bodyguard Association (IBA). I have training in Counter-terror and Private Military contractor at European Security Academy and a Certificate in Weapons and Tactics for High-Risk Environment.

“I am also experienced in Individual Battle Handling tactics with the elite forces Recce Coy and NGAO Kenya,” Ojiambo’s profile reads on LinkedIn.

The International Bodyguard Association (IBA) is one of the oldest & largest bodyguard organisations in the world. Founded in 1957, IBA has established itself as the leading international training organisation for bodyguards. It has branches in over 50 countries globally.

Ojiambo further says that he is a contractor member of the International Police Organisation (IPO).

“I am always looking forward to going back to Europe security academy facilities in Poland for refresher courses,” the actor tweeted on July 12, 2020.

During his early working days, the security expert fell prey to a con game in Mombasa. In an interview in September 2019, he recalled how he was scammed into buying fake gold at Ksh 20,000 in Mombasa.

“A guy who knew I wanted gold came to me and asked if I wanted to see some pieces he had. We went to a corner and he showed me a gold chain which I bought.

“I was able to walk around with the gold chain during the day, people thought I was macho. Then one morning I said let me shower with the chain. I was shocked when I looked in the mirror because the gold was gone, all that was left was some silver thing,” Ojiambo recalled.

He is also a medic, having studied Diploma in Pharmacy at the Kenya Medical College. Ojiambo supplies hospitals with equipment

Moi Avenue Shooting: Inside Actor Ainea Ojiambo’s Private Military Career Renowned actor, Ainea Ojiambo, who was involved in a shooting on Moi Avenue, Nairobi on Friday, April 30, is not only a filmmaker but also a private military contractor and top marksman. Ojiambo was captured on CCTV camera firing at two goons who accosted him on