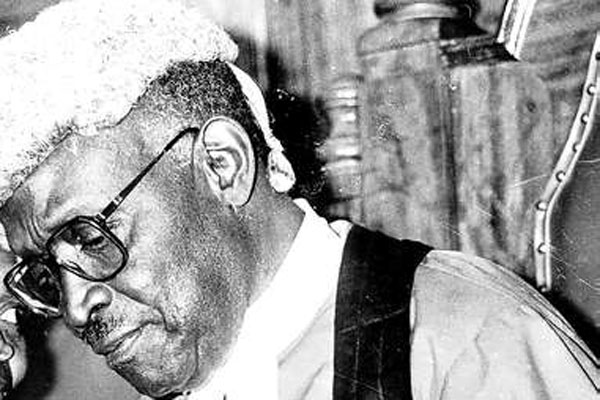 When the history of the Judiciary in Kenya is finally written, the story of Justice Cecil Ethelwood Miller will certainly not have a happy ending.

If one man emasculated the judicial system and held it tight for the executive to do the same — Justice Miller was in a class of his own.

The change of guard at the Judiciary allows us to look back at this man, whose 27th anniversary of his death was quietly celebrated two weeks ago, and for a simple reason — everything that could have gone wrong at the judiciary went wrong during his tenure.

Justice Miller came to the national limelight in 1982 when he was appointed the chairman of the Judicial Commission appointed to inquire into allegations against former Attorney-General Charles Njonjo.

Miller had come into office to replace Justice CB Madan, a man still regarded as the best chief justice in Kenya.

Madan was more than a CJ – he was a poet, politician and a brilliant legal mind. Miller was the opposite.

Miller entered into office in 1986 at a time when Moi was gearing up to crack down on dissidents opposed to his rule. In his June 1, 1986 speech, Moi had described his opponents as a “threat to national security” and warned that he won’t brook any opposition. That November, he appointed Miller the new chief justice.

One of the landmark errors was that he allowed the Bill of Rights to be suspended, technically leaving Moi’s critics without recourse to their constitutional rights. Torture had become the main method to extract confessions at the High Court where Prosecutor Bernard Chunga (later Chief Justice) would haul scared and petrified activists into the courts after hours after passing through a notorious interrogator, James Opiyo, at Nyayo House. The team that carried out these interrogations and torture was trained by ex-Vietnam CIA agents, assisting the Special Branch on how to extract information, according to insiders.

It was this system that Miller was supposed to give a legal backing to by standing midpoint between Kanu-era thuggery and an intimidated judiciary.

At this time, a huge chunk of the salaries of the upper echelons of the judiciary was being paid by the British Government — in a system that was supposed to maintain the independence of the judiciary but had turned the well-paid judges into purveyors of judicial dishonesty. Since their contracts depended on the goodwill of the appointing authority — President Moi — loyalty came before fairness. Again, Moi was a close friend of British Prime Minister Margaret Thatcher whose government bankrolled the judiciary. That is why protests by Law Society of Kenya addressed to UK Home Secretary Douglas Hurd (now Lord Hurd of Westwell) to cut aid to the judiciary failed and he was dismissed by Gitobu Imanyara as “being too timid to say the same things about democracy and human rights in Kenya as he did in Russia, China and South Africa”.

With that, Justice Miller, a former British Air Force pilot during World War II, could only sit to legitimise an authoritarian system that presided over corruption and nepotism.

Before he came to that office, Miller had been allowed to amass wealth using his office as chairman of the Law Reform Commission.

The zeal with which he hunted for beach plots and properties is contained in secret letters that he wrote to then Coast Provincial Commissioners Lucas Daudi Galgalo and later Yusuf Haji.

In one of the letters, dated December 1985, addressed to SM Komu, District Commissioner Kilifi, and stamped personal and confidential, Justice Miller was interested in having beach plots in Bofa, Kilifi, regarded as one of the best beaches in Kenya.

In the letter, he writes: “Regarding first row plots at Bofa, please let me know if Plot Numbers 11 to 25 are still vacant and their sizes. Please also, indicate what is the approximate price per acre … In regard to Malindi plots, I understand the same are near or next to the Golf Course, please confirm if this is the case, confirming plot numbers”.

Justice Miller would also nudge the provincial administration to get him a residential plot at the coast as he did in February 1985. He had initially approached PC Galgalo who would hand over the matter to his successor Haji with a letter. He told Haji that Justice Miller wanted “a small residential plot for himself … obviously, Justice Miller is a distinguished personality well known to all of us, whose case appears genuine and most deserving … help him as much as possible.”

The DC Kilifi would later confirm to Mr Haji that there were vacant plots available at Bofa Kilifi. “I suggest you ask Justice Miller (to come) so we can show him the plots to enable him decide which plots he can apply for.”

In yet another letter dated April 18, 1985, the DC tells Haji that he has managed to get “more vacant residential plots for which Hon Justice Miller can be considered … it is wise for Justice Miller to go to the proposed site to select a suitable plot or plots to his standard.”

Haji told him that he would also get some plots in Malindi and “after you have done your selection, the necessary action to get one of them allocated to you will be initiated from this side.”

That is the man who would months later be the Chief Justice.

Born in Guyana, Miller was for years the only black face at the Court of Appeal — and the first black judge in Kenya. There is a famous picture of him being bestowed with an Elder of the Order of Burning Spear (EBS) by President Kenyatta. Once he got into the office of the Chief Justice, he took upon his duty to be the defender of the Moi government.

The year 1987 was the height of Kanu’s paranoia. At one point, police arrested two US activists — Chicago pathologist Dr Robert Kirschner and retired Judge Marvin Frankel, the chairman of the Board of Directors of the New York-based Lawyers Committee for Human Rights. The two had come to hear an inquest into the death of a former rally driver, Peter Njenga Karanja, while in police custody.

The two were taken to Nyayo House and interrogated about a fictitious letter that indicated that the American Ku Klux Klan had plotted to overthrow Moi. The letter had been used to detain and deport US missionaries who openly criticised the Moi excesses.

It took the US Ambassador warning of “war” for Moi to stop intimidating US citizens. In an interview she gave later, Ambassador Eleanor Constable recalls calling Bethuel Kiplagat, then Permanent secretary for Foreign Affairs: “Listen, you better know this letter is a forgery. If you’re throwing the missionaries out because of this letter, then think again, because somebody is messing around here …”

Then they arrested the US Judge and Ms Constable hit the roof and called a person she identifies as “a friend” at the Foreign Affairs: “I don’t give a damn what you guys publish in your stupid newspapers. But if you touch one American citizen, it’s war. I will pull out the stops here. You will be so sorry.”

“Calm down, calm down,” said the senior Kenyan official.

“No, I won’t calm down. This is outrageous, this is inflammatory. You are nuts, it’s a forgery.”

After a few hours Moi told a rally that American missionaries are a “wonderful people, and we love having them in Kenya”.

These excesses the judiciary could not protect people against reached a crescendo when a Kenyan farmer disappeared at the hands of his interrogators at Nyayo House.

Mbaraka Karanja’s case became sensational after his family applied for a writ of habeas corpus and Justice Derek Schofield, one of the most independent judges in Kenya, ordered the police to produce him in court.

The police surprised the court when they said that Mr Karanja had been shot dead while “escaping” from police custody. Justice Schofield ordered the police to produce the body.

What followed was a grisly exercise as police descended on the Eldoret municipal cemetery in search of the body. After opening 19 graves, they failed to get the body. (Karanja’s body had been cremated in an Eldoret forest). Justice Schofield now demanded an explanation from Commissioner of Police and Director of Criminal Investigations while describing the entire episode as “callous”.

Determined to cite them for contempt of court — and possibly throw them into jail — Justice Schofield was removed from the case by Justice Miller and dispatched to Meru. He refused to go to Meru and opted to resign in a week that exposed the judiciary to ridicule.

Schofield contested the powers of the Chief Justice to remove him from office, saying only the Judicial Service Commission could do so. The Head of Civil Service, Joseph arap Leting, defended the court.

Some six months later, Miller oversaw the destruction of the freedom enjoyed by judicial officers when he okayed constitutional changes that removed the security of tenure for judges. That way, he could sack judges at will. Others who lost their security of tenure were the Attorney-General and the Controller and Auditor-General.

The first person he sacked was Justice Patrick O’Connor for resisting an attempt to disqualify himself from a case. He called a press conference and described Justice O’Connor as a “defiant judge”.

But when it came to cases touching on him, judges would give him the necessary support as it happened in the Miller vs Miller divorce case of 1988. While Justice Miller’s ex-wife wanted a particular judge disqualified from the case since he was a family friend, the Court of Appeal held that “The period and duration of the claimed friendship is not given … (and) the fact that the judge knows the respondent would not justify disqualification. The respondent knows, and is known by all the judges. If that personal knowledge is to disqualify, there would be no judge who would not be held disqualified”.

That case is today used to discourage attempts to have judges disqualified from cases. The court emphasised that “no party to a suit should be placed in a position where he can choose his court. We are far from saying that in no circumstances is it possible for a judge to disqualify himself or be reasonably expected to disqualify himself from hearing a case. It would be disastrous if this were to become the practice. The administration of justice through the court would be adversely affected … mischievous parties would obtain disqualification of judges at ease.”

That Miller had used his office to settle scores is well documented. He got sole custody of his children after the divorce. He even tried to drag his former boss, Justice Alfred Simpson, into the Njonjo Inquiry to explain his rulings.

When he died, his wife, Christine Nyagitha Miller, expressed dissatisfaction with the reasons given for her husband’s death. She wanted an inquiry which she never got.

But Miller, in his short tenure, had damaged the judiciary beyond repair. Justice David Maraga will continue rebuilding that citadel.

Chief Justice Cecil Miller. PHOTO | FILE Miller, chief justice who ruined Judiciary By JOHN KAMAU When the history of the Judiciary in Kenya is finally written, the story of Justice Cecil Ethelwood Miller will certainly not have a happy ending. If one man emasculated the judicial system and held it tight for the executive