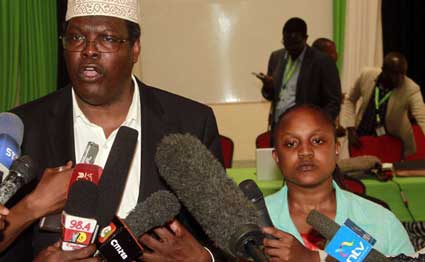 Ms Wangenye called a press conference Saturday and declared that she had stepped down as Mr Miguna’s running mate due to poor relations with her boss.

“I have stepped down because of poor working relationship with my candidate, I believe in teamwork, if there is no teamwork, we cannot achieve what we are setting out to deliver to Nairobians,” she told Nation.

She maintained that as good as Mr Miguna’s manifesto was, it was going to be difficult to deliver with poor team work.

“I believe that our manifesto is exactly what Nairobi needs but we cannot deliver on it if we do not have team work,” she said.

She accused Mr Miguna, who is running as an independent candidate, of showing contempt to his opponents for the Nairobi gubernatorial seat.

“I don’t think the way to go about it is by abusing the media and your opponents because you have better education,” she noted.

Miguna’s running mate steps down Reviewed by samrack on July 29, 2017 .