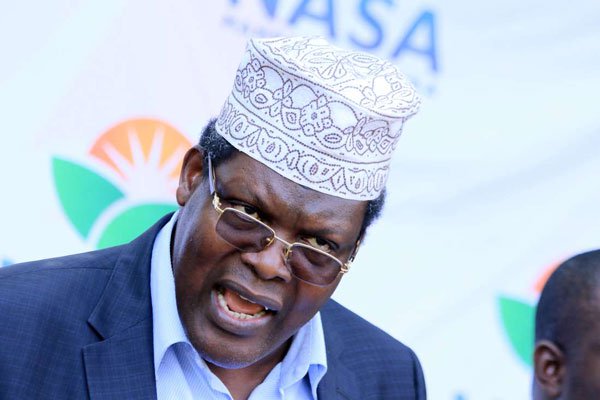 This was after he flatly rejected government’s attempts to re-deport him to Dubai, United Arab Emirates, a country in which he said he was not born and has no relatives or business associates.

The government rejected Dr Miguna’s return to Kenya and attempted to re-deport him to Canada after a nine-hour stand-off at the airport.

But Mr Miguna refused to board the Dubai-bound Emirates flight, triggering probably the most dramatic scenes ever witnessed at JKIA in recent days.

“I am not going anywhere….where is my luggage? Where is my passport? You cannot take me from my country by force,” he remonstrated as the commotion delayed Flight EK 722 bound for Dubai.

So violent were the scenes that the pilot of the plane took time to listen to the hostile passenger police had bundled into his craft.

“I’m a Kenyan citizen by birth,” he told the attentive pilot, whose name the Nation could not immediately establish.

“These court orders say I must be in this country,” he went on as he brandished High Court orders that directed his return to Kenya after he was violently deported to Canada.

“So why are they pushing you in,” the pilot enquired.

“Because of politics,” Dr Miguna responded. “They are scared of me.”

He proceeded to give reasons why he would not allow the pilot to take off with him.

“Now you, as captain, is (sic) not allowed to fly me anywhere against my will,” he said.

“First of all, I don’t have a passport, secondly I didn’t book your plane, thirdly I don’t have status in Dubai … so how am I gonna go to Dubai? I don’t live in Dubai, I don’t work in Dubai, I have no connections to Dubai. So I’m not going to Dubai.”

“They cannot chase me like a pig when I have court orders. I was born here… some of these guys were not born here… they are just thugs that have been hired. They have chased the media like rabbits. They are shooting at the media.”

Dr Miguna had been forcibly whisked to the aircraft by a contingent of about 40 police officers in full view of ODM leader Raila Odinga and his lawyers John Khaminwa, Cliff Ombeta and Julie Soweto.

Another group of officers laid siege at the airport, beating up journalists to scare them from capturing the drama.

Dr Miguna was grabbed and literally carried to the aircraft that had been delayed for the purpose.

Miguna Miguna spends night at JKIA in Nairobi Reviewed by samrack on March 27, 2018 .

Miguna Miguna spends night at JKIA in Nairobi Fiery lawyer and self-declared National Resistance Movement general Miguna Miguna on Monday spent the night in the cold at Jomo Kenyatta International Airport in Nairobi. This was after he flatly rejected government’s attempts to re-deport him to Dubai, United Arab Emirates, a country in which he said