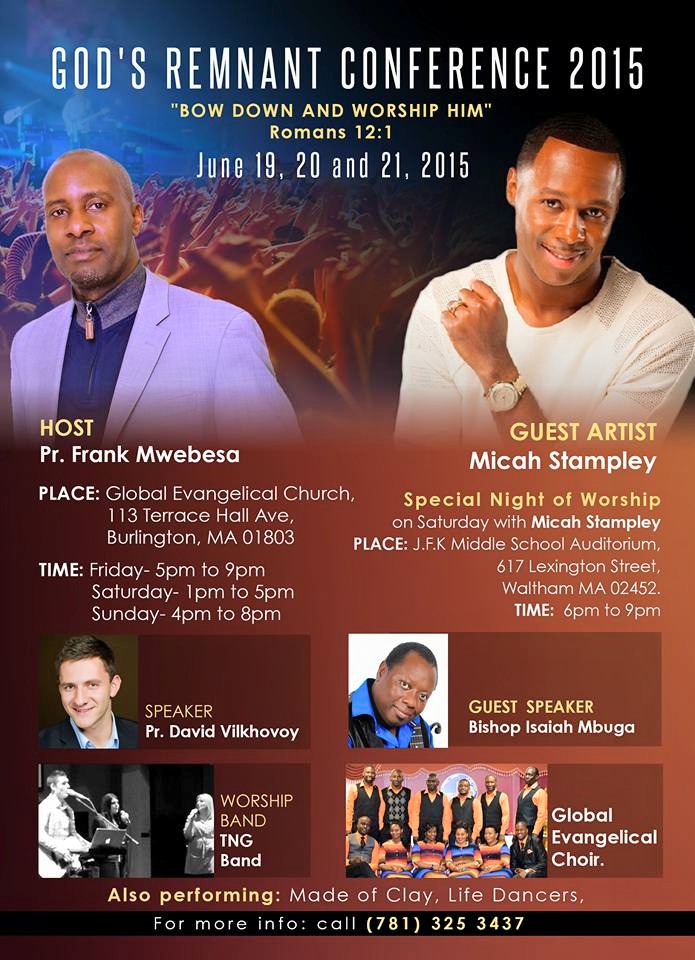 God’s Remnant Conference 2015, is the fourth annual conference that is organized by God’s Remnant Ministries that started over four years ago. The call for the God’s Remnant ministries is to raise champions for our Lord and savior Jesus Christ in the youth and the young adults in this, our generation. Over the four years of this call, many youth and young adults have been totally transformed, fired up and sold out for the Lord in these conferences and other small gatherings. So make this year, your year and seize this moment and be part of what God is doing in our midst, in New England, USA and the world at large. This is truly YOUR time, OUR time! Come and receive from Him through Seasoned servants of the Most God. The conference Venue: Global Evangelical Church, 113 Terrace Hall Avenue, Burlington MA.

This year’s theme is “BOW DOWN AND WORSHIP HIM” and we are excited to be joined by Micah Stampley a renowned, seasoned and one of the leading worshippers in our generation, to lead in the night of worship on the 20th of June 2015, at the JFK Middle school Auditorium, 617 Lexington Street, Waltham MA at 6pm.  Micah Stampley began his worldwide service to the Lord with the work on his national debut for Bishop T.D Jakes Dexterity/EMI Gospel, The Songbook of Micah, which immediately catapulted him to the forefront of contemporary gospel: the disc shot the No.3 Slot of the gospel charts, snagged glowing publicity from the likes of Billboard (“Top 10 Gospel Music Artist of 2005”) and AOL Black Voices (“Top 11 Gospel Geniuses of 2005”) and earned Stampley Stellar nominations for New Artist and Male Vocalist of the Year. He has also released “A Fresh Wind”, produced by Award winning Aaron Lindsey (Isreal&New Breed, Marvin Sapp), “Ransomed” released in November 2008 that continues to climb billboard radio charts and garnering global acclaim. In 2011 he released One Voice, in partnership with MW/Universal Music group. In May 2013, Micah and Interface joined forces with Motown Gospel and released the album “Love Never Fail” which debuted #6 on Gospel Charts and produced a top 10 single and music video for the church Anthem, “Our God”, originally made popular by Chris Tomlin. Micah has also produced chart topping music videos, documentaries and television productions that have been featured on several networks including TBN, BET, GMC, FOX.

Now, you can see the hand chosen of God to serve Him in our generation are in town so plan to attend as we all look forward to a major move of the Holy Spirit in this conference. But as you prepare to attend, do not leave behind the unchurched, the troubled, the heartbroken, sick and destitute, bring them, for the power of the Almighty God will be present to meet His people individually. For more information, feel free to call 781-325-3437.