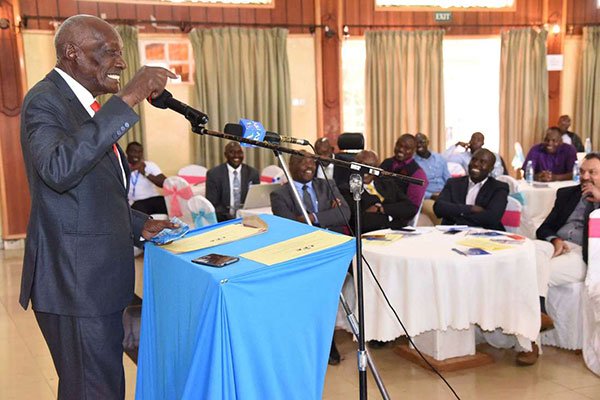 When Eldoret played host to the men’s conference on Monday, the event opened a new chapter in Kenya’s gender discourse.

The first ever such meeting in the country, however, drew mixed reactions from Kenyans, with some dismissing it as an ill-informed affair.

That a controversial Uasin Gishu farmer and politician was a keynote speaker shone a spotlight on the one-day event that was highly attended.

Mzee Jackson Kibor, 85, has had three bitter divorces that played out in the public, one from Josephine Jepkoech, his wife of more than 50 years.

He advised men to “be firm, non-violent but not to be easily swayed by their women”, adding that he has always advocated for strong men and even defended their rights in old age.

While women have converged on different occasions to discuss their affairs, to network and to forge ways for their empowerment, men-only gatherings are virtually unheard of, not just in Kenya, but across the world.

So, why a men’s-only conference? What has changed? Do Kenyan men feel vulnerable? Do they feel that their place in the society is under threat? Are these fears real or imagined?

Supporting the conference, Nairobi pastor and speaker Robert Burale termed it “a time to break” and a gathering that would help “to restore the roar” among men.

Previously, Mr Burale has been on record saying that Kenyan men are suffering from many insecurities, and that they are vulnerable “when they can’t provide”.

Mr Burale notes that men prefer not to talk about their vulnerabilities and instead “scream in the inside”.

He argued that the problem is compounded when men compare themselves with other men who are more accomplished.

For Kanyo Sinyanya, this was a perfect break from “pain and difficulties” for Kenyan men.

“It’s always nice to be around men only,” he tweeted, adding that whenever men are gathered, they need not “worry about women reminding us how broke and useless we are”.

Some women too, feel men— especially the married ones—are under siege.

Some Kenyan men, Joyce Musonga, said are facing domestic abuse, and that the majority of them hide “their vulnerability on social media owing to their egos”.

Mr Sinyanya went ahead to lament that men are frustrated when women fail to acknowledge their efforts to make them happy.

Others, particularly women, dismissed the conference.

NO NEED FOR ISOLATION
Keya Amachilang argued that such a conference would only lead to broken marriages, making reference to Mr Kibor’s divorce from his wives.

Some men too were not impressed. Evans Bett dismissed “the purported men’s conference” as a gathering of “old men out to catch up”.

“We need a men’s conference that targets all generations for purposes of comparing notes,” Bett opined.

Michael Muchiri argued that the “event is created by men…as a plot to escape their responsibilities” particularly on Valentine’s Day.

While agreeing that time is ripe for discussions by both sexes, Joan Waeni argued that men and women need not meet in isolation to discuss their affairs.

“I don’t attend women-only events. Some of the problems men face are caused by women and unless they bring them on board to build consensus, then the event is void.”

PERCEPTION
Experts observe that in the last few years, there has been a growing feeling that after decades of empowering women and girls, boys have been left behind.

They argue that this isolation is largely to blame for widespread alcoholism, rising school dropout rate and a growing trend in toxic masculinity among men.

In some counties in central Kenya, for instance, there are more girls in school than boys.

Women and girls in these regions are also increasing playing roles that were traditionally reserved for men— including being breadwinners and bringing up families single-handedly.

“We need to re-think on whether the advancement of the girls’ agenda has been at the expense of boys,” notes Faith Mwende, a social scientist.

“We need to place equal value to both male and female, in their uniqueness and differences. This will go a long way in changing perceptions about children, even at birth, and enable us to look at children exactly as that: children.”

But has this push for men’s conference a Kenya-only movement?

Elsewhere across the continent, men have gathered “to take back our control”, with similar gatherings held in Mauritius and South Africa in May and October.

Men’s conference: Are Kenyan men under siege? Reviewed by samrack on October 22, 2019 .

Share thisFacebookTwitterPinterestEmailWhatsAppMen’s conference: Are Kenyan men under siege? When Eldoret played host to the men’s conference on Monday, the event opened a new chapter in Kenya’s gender discourse. The first ever such meeting in the country, however, drew mixed reactions from Kenyans, with some dismissing it as an ill-informed affair. That a controversial Uasin Gishu