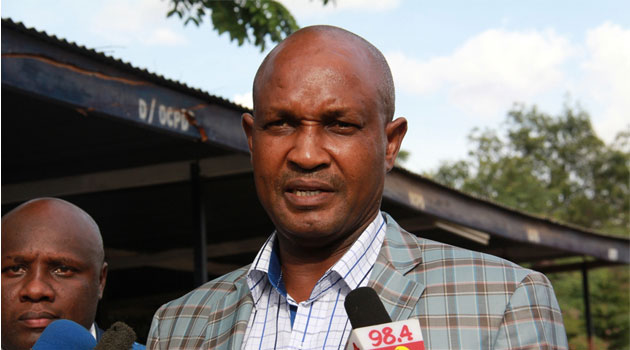 Until he became Imenti Central MP, little was known about Gideon Mwiti Irea, the man now at the centre of an alleged rape scandal.

Accusations that he raped a woman inside his office shocked the country. But to those who have known the man over the years, the despicable incident could have been dismissed as one of his many antics, were it not for the wide media coverage.

With deep pockets earned from involvement in a string of pyramid schemes, Mr Mwiti, whose flashy lifestyle is the envy of many, is known to keep young girls close to him during his frequent drinking sprees in the city.

He lives a mysterious life and would hardly patronise a social place for long hours. His social friends we spoke to say he fears being smoked out by people he might have dealt with in the massive money schemes.

To his constituents, Mr Mwiti is their “Livondo”, the money man, but to a majority of those who lost money through his lending schemes, he is the “Madoff”.

Bernard Madoff is an American swindler who was sentenced to 150 years in prison for running the biggest Ponzi scheme in US history.

At the height of the pyramid schemes, courts and police stations were part of his life owing to numerous complaints by those who had lost their investments through him.

The woman allegedly raped by the MP in his Westlands office claimed she had gone to meet Mr Mwiti to discuss a project in one of his business enterprises — The Kenya Land Sacco.

The Kenya Land Sacco is yet another scheme the MP has started, targeting investors seeking to own a piece of land.

Mr Mwiti’s chequered history in the money schemes started in the early 1990s when he opened the Profession and Business Community Sacco (Pabco) at the Nacico Plaza next to the populous Machakos bus station in Nairobi.

He lured many investors through a financing scheme that was to assist them to own matatus — a business which was then at its peak.

But hardly two years on, Pabco closed shop with millions of investors’ money. The then City Council of Nairobi Sacco, who were the landlords, closed the offices over unpaid rent after efforts to trace Mr Mwiti became fruitless.

After the dust had settled, Mr Mwiti resurfaced and on January 29, 2004, he incorporated the Kenya Akiba Micro Financing Ltd to lend money to entrepreneurs.

Akiba first opened offices at Victor House next to Nation Centre but later moved to the mezzanine floor of Lonrho House in Nairobi.

They accused the company of carrying out illegal banking business. The company’s accounts in three banks were frozen and the firm was put under lock and key. Kenya Akiba had over 6,000 customers and 300 employees.

Three days later, the company moved to court claiming over Sh930 million in damages and named 13 senior police officers and CBK employees as having been involved in the raid. CBK and the Attorney-General were named as defendants.

Mr Mwiti and three other directors were arrested and charged before a Nairobi court, accused of carrying out banking business without approval, contrary to Section 3(1) and 3(2) of the Banking Act and unlawfully accepting deposits without valid licence contrary to Section 16(1) and (9).

The prosecution called 17 witnesses to testify in the criminal case that ran for six years. However, on September 23, 2011, the magistrate acquitted Mr Mwiti and co-accused holding that the three never broke any law when they carried out the business.

It is against the background of the acquittal in the criminal case that Mr Mwiti sued the CBK for damages, saying the court had cleared the directors of any blame.

On May 5, 2012, Justice Alfred Mabeya ordered CBK to pay the micro-finance firm Sh1 billion after the court found the regulator acted arbitrarily in closing down the business.

The judge said the raid on its offices by BFIU in 2005 was “unlawful, unconstitutional and unacceptable”. Akiba was closed at the height of the pyramid schemes crisis.

CBK argued that Section 3(1) prohibited the use of “Finance and Bank” by companies which solicit or accept deposits as defined in the Act except for institutions that are licensed and operate under the Banking or Building Societies Act.

But the judge said the allegations by CBK that Kenya Akiba carried out banking business contrary to the Banking Act, was “a red herring aimed to cushion the mother bank from liability for the blatant, illegal and uncalled for raid”.

The judge said the raid on the company’s head office and branches not only broke the firm’s backbone as a commercial entity but also ruined businesses of more than 6,000 Kenya Akiba’s customers and affected the livelihoods of 300 employees.

“Having analysed the company’s business activities through the records which have been in CBK’s custody for the last seven years, the bank has not produced any material to show that Kenya Akiba was doing anything other than offering hire-purchase and to assist in financing sale of motor vehicles and goods,” ruled Justice Mabeya.

On October 4, 2013, a magistrate acquitted Mr Mwiti of the criminal charges in a case lodged by 12 investors who accused him of defrauding them of their deposits.

Magistrate Elena Nderitu accused the prosecution of conducting shoddy investigations and failing to prove its case against Mr Mwiti.

She ruled that no money was paid to Mr Mwiti and the documentary evidence presented to court did not link him to the offence.

He had been accused of inducing members to deposit money with the defunct Kenya Business Community Sacco.

The prosecution alleged that Mr Mwiti tricked 12 members of the Sacco to part with Sh13 million under the guise that the savings would earn an interest rate of 16 per cent a month.

GIDEON-MWITI-GIGIRI Mega Scandals, Life in Courts is MP Gideon Mwiti’s Second Nature Until he became Imenti Central MP, little was known about Gideon Mwiti Irea, the man now at the centre of an alleged rape scandal. Accusations that he raped a woman inside his office shocked the country. But to those who have known the