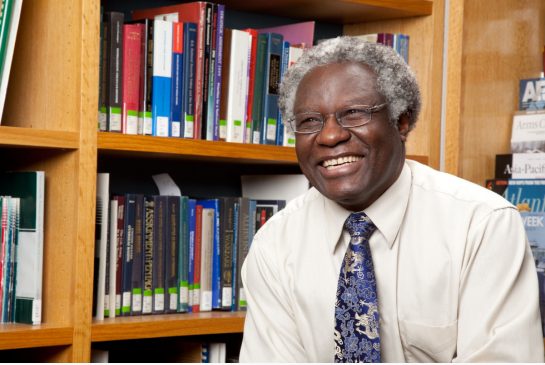 Calestous Juma, a professor at Harvard, is one of the leading propoenents of using genetically modified crops.

By: Kate Allen Science and Technology reporter,
When Calestous Juma was 9 years old, floods inundated his family’s village. Port Victoria sits on the Kenyan shore of Lake Victoria, just shy of the Ugandan border.
As residents began considering how to replant family farms on less land, Calestous’ father, John Juma, travelled to Uganda. He returned with cuttings of the cassava plant, a starchy, carbohydrate-rich tuber. At the time, cassava was unfamiliar in that part of Kenya.
The village debated whether to plant the cassava. Some wanted to wait until the water subsided and replant traditional crops. When wild pigs, displaced by the flood, came and ate some seedlings, villagers blamed John Juma’s cassava for attracting them. And “they were worried these plants would breed demons,” says Calestous Juma.

The cassava enthusiasts eventually prevailed, however, and Juma says the crop has become a staple in Kenya.
Fifty years later, Juma cites those debates as the fuel for his interest in agricultural innovation, the issue that knits together a career that has taken him from Kenya, to the U.K., Canada and the U.S. Juma is a professor of the practice of international development at Harvard, the director of the science, technology and globalization project at the Harvard Kennedy School, and the director of the Agricultural Innovation in Africa Project, funded by the Bill and Melinda Gates Foundation.
But the cassava story also explains the frustration that seeped from a speech he gave in Montreal, when he accepted an honourary degree from McGill University.
Juma, who calls himself a genetically modified crop “optimist,” titled the speech “A Plea for Agricultural Innovation” and used the platform to decry the “technological intolerance” that has hampered the adoption of GMOs, particularly in Africa.

Calestous Juma
Professor of the Practice of International Development; Director, Science, Technology, and Globalization Project; Principal Investigator, Agricultural Innovation in Africa
Member of the Board, Belfer Center for Science and International Affairs
Experience
Calestous Juma is Professor of the Practice of International Development and Director of the Science, Technology, and Globalization Project. He directs the Agricultural Innovation in Africa Project funded by the Bill and Melinda Gates Foundation and serves as Faculty Chair of the Edward S. Mason Fellows Program as well as Faculty Chair of the Innovation for Economic Development executive program. Juma is a former Executive Secretary of the UN Convention on Biological Diversity and Founding Director of the African Centre for Technology Studies in Nairobi. He is co-chair of the African Union’s High-Level Panel on Science, Technology and Innovation and a jury member of the Queen Elizabeth Prize for Engineering. He was Chancellor of the University of Guyana and has been elected to several scientific academies including the Royal Society of London, the US National Academy of Sciences, the World Academy of Sciences, the UK Royal Academy of Engineering and the African Academy of Sciences. He has won several international awards for his work on sustainable development. He holds a doctorate in science and technology policy studies and has written widely on science, technology, and environment. Juma serves on the boards of several international bodies and is editor of the International Journal of Technology and Globalisation and the International Journal of Biotechnology. His latest book, The New Harvest: Agricultural Innovation in Africa, was published by Oxford University Press in 2011. He is currently writing books on engineering for development and resistance to new technologies. Follow @Calestous on Twitter.