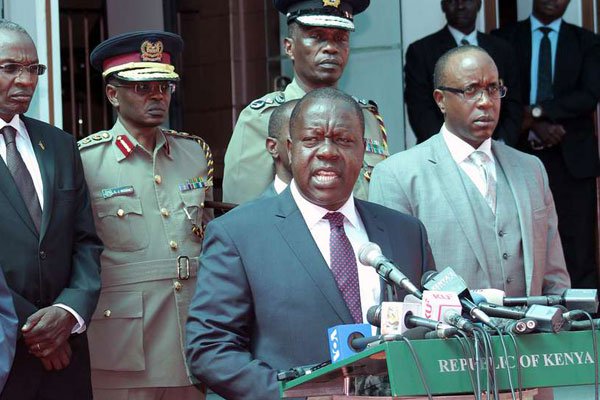 From the famous State House breakfast with members of the Kenya Editors’ Guild early in his first term in 2013, onto the present crack down, President Uhuru Kenyatta has enjoyed a love-hate relationship with the media.

The situation has never been this bad, however as with the current onslaught that has seen a shutdown of the three biggest TV stations in the country.

KTN News of the Standard Group, NTV of the Nation Media Group and Citizen TV and the Kikuyu-language Inooro TV of Royal Media Services were forced off air on January 30, after defying government warnings and broadcasting live from the venue of the contentious “swearing-in” of Opposition leader Raila Odinga.

SUBVERSION
Since then, the three major broadcast outlets in Kenya have remained shut except for a small minority able to access broadcast streamed on YouTube.

The Cabinet Secretary for Interior Fred Matiang’i has indicated that the TV blockade will remain indefinitely, ominously accusing the media of being party to alleged subversion aimed at violent overthrow of the Jubilee government.

The government seems determined to hang tough, with suggestions that it will ignore a High Court order issued by Justice Chacha Mwita directing a lifting of the embargo pending determination of a case filed by activist Okiya Omtatah.

DICTATORSHIP
It has been a public relations disaster for the Jubilee government, with international media turning its lenses to a crack down of a magnitude not previously witnessed in independent Kenya.

Global media advocacy and civil rights groups have also turned attention to the situation in Kenya, raising concerns around the world on a country that has previously been a beacon of freedom in the region turning increasingly intolerant and presenting the spectre of a creeping dictatorship.

In addition to the broadcast shutdown, there have also been reports that State security agents were intent on arresting individual journalists, targeting Kenya Editors’ Guild chairman Linus Kaikai and his NTV colleagues Larry Madowo and Ken Mijungu.

It was Mr Kaikai, head of the Nation Group’s broadcasting arm, who first raised the alarm about an intended media gag on the Nasa meeting, when he released a strongly-worded statement on behalf of the Editors’ Guild decrying any such moves.

STATE HOUSE MEETING
The statement, issued on Monday evening, the eve of the Nasa event, denounced a meeting at State House the previous Friday between President Kenyatta and a group of editors and media house executives, where a blackout on Mr Odinga’s swearing-in was broached.

A strong warning was reportedly issued at the meeting that TV stations that air the event live would be shutdown.

The Kaikai statement kicked off a firestorm and also exposed rifts within the media.

It was immediately disowned by Kenya Editors’ Guild vice-chairman Sam Maina, who said the statement only represented Mr Kaikai’s personal views as it had not been shared with and approved by the Executive Committee.

Mr Maina revealed that he also attended the State House meeting as a representative of the public broadcaster, KBC, and strongly disputed Mr Kaikai’s account of what transpired.

He flatly denied that media houses were threatened with loss of broadcasting licences if they aired the Nasa event.

The Editors’ Guild chairman was also condemned by Mr Gaya of the Media Owners Association, who denied that the State House meeting concluded with threats to withdraw broadcast licences for any TV stations that gave prominence to Mr Odinga’s mock oath of office.

Mr Gaya, an open supporter of the Jubilee government, later went on record supporting the shutdown on TV stations.

That was a curious stance from a representative of media investors who stand to suffer massive financial losses as long as they remain off-air.

CRITICISM
Despite the denials from Mr Maina and Mr Gaya, the government did indeed shutdown broadcast stations that went live from Uhuru Park, thereby confirming the threats from State House.

On Thursday, the Kenya Editors’ Guild Executive Committee moved to dispel notions of divisions within by coming out with a strongly worded statement condemning government efforts to gag the media and ratifying Mr Kaikai’s earlier statement.

The position of the Media Owners however remained unclear.

Mr Gaya had already gone on record as supporting the crack down, echoing the government position that covering the Nasa rally was itself an illegality and threat to peace.

There has to date been no clarification on whether Mr Gaya’s was a personal position from a confirmed Jubilee supporter, or a corporate position.

CIVIL SOCIETY
It also quickly became apparent that while they were the entities most directly affected by the broadcast shutdown, the media houses ceded the front line in the campaign against government gagging to civil society activists.

It is instructive that the lawsuit that secured the temporary order for restoration of the airwaves was filed not by the media houses, but by famous serial litigant and public-interest crusader Okiya Omtatah.

Meanwhile, the United States, Britain and European Union allies that have generally supported President Kenyatta and Deputy President William Ruto in the stand-off with Mr Odinga and presidential election running mate Kalonzo Musyoka have been left deeply embarrassed by the media crack down.

NASA POLITICIANS
They have recognised President Kenyatta’s victory from the repeat presidential election, and condemned Mr Odinga’s self-inauguration as a dangerous and divisive move that could incite disorder.

However, they now have to deal with perceptions that in supporting Jubilee, they are supporting the assault against the media.

They are also seen to be backing the concurrent crack down against the opposition leaders involved in Mr Odinga’s swearing-in and the general opposition campaign following on from refusal to recognise President Kenyatta’s legitimacy.

The government is using a purported threat to State security as justification for the crack down, but has presented little evidence to support its claim that Nasa swearing-in amounted to an attempted power grab, or presented the slightest threat to President Kenyatta’s stay in office.

It has described the Nasa event as illegal and unconstitutional, but then presented the argument that media coverage thus became illegal.