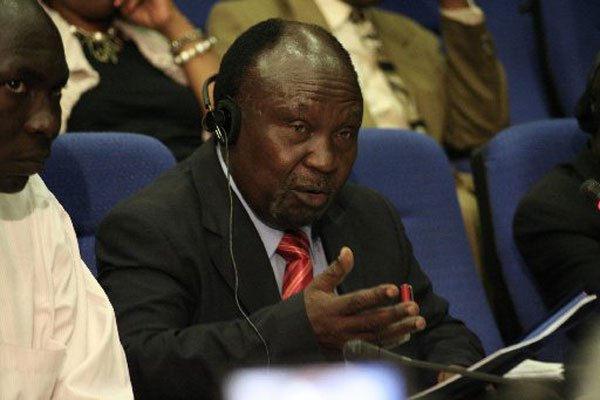 Former Nakuru MP Mark Mwithaga before the Truth, Justice and Reconciliation Commission at NHIF building on March 05, 2012 where he gave an overview of the alleged political assassination of the late JM Kariuki. PHOTO | FILE | NATION MEDIA GROUP

Former Nakuru Town MP Mark Mwithaga who died on Monday was a politician of high repute.

His footsteps and are well imprinted during the times of Presidents Mzee Jomo Kenyatta and Daniel Moi.

Even as the news of his death went viral on social media, one thing stood out — not many young Kenyans knew about this great icon of nationalism.

A staunch Catholic and a pianist at the Christ the King Cathedral in Nakuru, he was perhaps the only MP in Kenya and to a large extent in Africa to have been elected while serving a jail term following a matrimonial conflict.

Meeting the diminutive legislator strolling along the congested Kenyatta Avenue in Nakuru jostling for space, being shoved and brushed by the unconcerned residents, he could easily have been dismissed as any other ordinary person going about his business.

Yet, this is the man who started the first ever public transport co-operative society in Nakuru town.

In the 1980s, he started Nakuru Transport Co-operative Society (NATCO) where he mobilised residents to pull resources to buy public service buses.

However, his ambitions to ease the transport headache for the residents was derailed due to politics.

But unaware to many, Mr Mwithaga, who died on Monday night at the age of 79 at the Nakuru War Memorial Hospital, is a forgotten freedom fighter and a hero who fought for this country passionately.

“If there is any true national hero in Nakuru County, then that person is the late Mr Mwithaga. His death is a big blow to this nation,” said the chairman of the Rift Valley Council of Elders Mr Gilbert Kabage.

His contributions were never recognised save for a few moments when he served as an assistant minister in the late President Mzee Jomo Kenyatta and Mwai Kibaki’s administrations.

Interestingly, he was very close to Mr Kibaki as the former head of State was his best man when he wedded his first wife at Holy Cross Catholic Church in Nakuru Town in 1975.

The only reward he received was when he was appointed as a member of the Film Commission during Mr Kibaki’s regime, but he was later relieved of his duties under unclear circumstances.

His love for the country is deeply manifest in his family as he named some of his children after  specific names that reminded him of his national pride.

For instance, he named his second born son Marsabit Mwithaga.

This was in remembrance of the detention term he served in the Northern Kenya town during the colonial days while his first born son Madaraka Mwithaga is named after the day when Kenya attained its self-rule.

“Somebody who will name his children names that are related to national causes must be a very committed to his political beliefs just like the late Mzee Jomo Kenyatta called his son Uhuru,” says Mr Koigi wa Wamwere, a veteran politician from the region.

And as far as the then Nakuru District politics were concerned, he was like the voice of reason when the district was divided into progressive and retrogressive political factions — he easily emerged as the leader of the progressive faction.

He stood together with prominent politicians such as Josiah Mwangi Kariuki popularly known as JM, Masinde Muliro, John Keen, Waruru Kanja, Charles Rubia and Martin Shikuku among others.

That was the political company of Mr Mwithaga and between that progressive wing of the nation, he was the link in Nakuru district.

Mr Mwithaga was the vice chairman of the parliamentary select committee chaired by the late Mr Elijah Mwangale.

He was jailed by the Kenyatta regime for taking a strong stance against machinations by the his regime to conceal the truth about the death of the late Nyandarua North politician, JM Kariuki.

He was the first Nakuru Kanu chairman immediately after independence but he was dislodged by Mr Kariuki Chotara and was relegated to the position of secretary.

They later parted ways when Mr Chotara formed the dreaded Nakuru Kanu Youth wing which is famous for terrorising the residents.

Journalist Michael Njuguna remembers him as a forthright politician who never compromised on his beliefs and principles.

“The moment Mr Chotara formed Kanu Youth wing, that was the moment their relationship with Mr Mwithaga hit its lowest level and it never recovered,” said Mr Njuguna a former Nation provincial news editor at the Nakuru Bureau

He was detained during colonial times and as if that was not enough, he was also jailed during President Jomo Kenyatta’s rule due to his fight for democracy.

To many who know the struggle that this country had undergone, they say he died too early and should have lived a little longer.

Mr Koigi Wamwere, who described him as his mentor, said that death was cruel as there are other older people than him who are still surviving.

He was a mentor to many politicians and top on the list is the former fiery Nakuru North MP Koigi wa Wawmere as he was a generation older, politically.

“Not many people in this country know that the late Mr Mwithaga shaped my political career. He supported my campaign for elections into parliament and when we were in parliament we stood together alongside Mr Kefa Wagara who was a former MP for Naivasha,” said Mr Koigi.

To many, Mr Mwithaga was an honest person and stood for integrity which he preached to fellow MPs during his days.

Mr Wa Wamwere says that he was such a forthright person that immediately he was first elected into parliament in 1980 he warned him against making false mileage claims as it would land him into trouble.

“He told me quite early as soon as I was sworn in to never make false mileage claims and later when we became seven bearded sisters it didn’t last long before we were being investigated for the false claims and we escaped because we had lived by such a warning,” recalls Mr Wa Wamwere.

He stood firm alongside the progressive legislative wing of the then Nakuru district politics and this put his political life on the sword against President Kenyatta who, incidentally, had made Nakuru Town his second home after Gatundu.

Sadly, though, his immense contributions were forgotten and even subsequent governments never recognised him.

The only time he came close to being rewarded for his efforts was when he was appointed as a member of the Film Commission during Mr Kibaki’s presidency.

Mark Mwithaga: Life and times of unsung hero Reviewed by samrack on August 2, 2016 .