Makueni governor walks a tightrope after move to Wiper 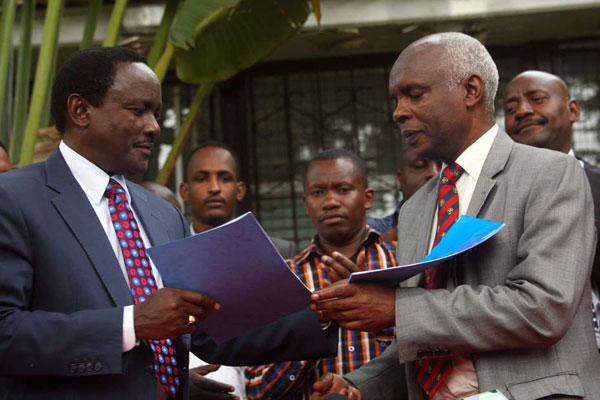 Wiper Democratic Movement leader Kalonzo Musyoka (left) and Makueni Governor Kivutha Kibwana formalise the latter’s move to Wiper. They were at Wiper offices in Nairobi on February 22, 2017. The governor was a lecturer first before being elected MP. PHOTO | EVANS HABIL | NATION MEDIA GROUP

Makueni governor walks a tightrope after move to Wiper

When Makueni Governor Kivutha Kibwana jumped ship from his Muungano Party to Wiper Democratic Movement, the dominant party in Ukambani, in February this year, local pundits fell over one another praising the move as a masterstroke.

It would not only guarantee the governor’s retention of his seat with ease but also enable the county chief to win over co-operative Ward Representatives and MPs in the county in the August 8 polls.

Three months later, and faced by three challengers, Prof Kibwana is wearing a brave face as he juggles between advancing the National Super Alliance (Nasa) agenda in Makueni, Machakos and Kitui counties while securing his interests at home.

The governor, whose relationship with ward representatives and MPs has been frosty for the longest, ran into more headwinds late last year when Mr David Masika, his first challenger, showed up.

At that time, the thinking was that Mr Masika would fly the Wiper flag against Prof Kibwana under his little known Muungano Party.

However, the ground shifted suddenly when Wiper entered into a pre-election pact with Muungano, sending a disgruntled Mr Masika to little known New Democrats.

He would rise through the ranks to become the party leader, a position he has used to poach from Wiper Prof Kibwana’s antagonists at the county Assembly, among them the Majority Leader Francis Mutuku and Mr Sammy Maseka, a firebrand Wote MCA who is famed for having moved a successful impeachment motion against the governor three years ago.

Mr Masika, one of the directors of Llyod Masika Ltd, a real estate management firm based in Nairobi, rides on his business acumen and has been poking holes at Prof Kibwana’s development scorecard that, he says, has laid bare the governor’s wanting leadership and gravitas.

But Prof Kibwana, a seasoned politician, was quick to dismiss Mr Masika and his camp, saying the leaders’ behaviour was informed by their diminishing clout and that, by leaving Wiper, they had betrayed Mr Musyoka.

DEVELOPMENT PLAN
However, Mr Masika’s entry in the governorship race has been welcomed by those dissatisfied with the administration of Prof Kibwana.

They cite low absorption of county budgets as shown by outstanding bank balances in subsequent Controller of Budget reports.

“We wasted close to eight months without a development budget and this has significantly derailed our development plan,” he explains.

HEALTH CARE
He was a lecturer at the University of Nairobi before he became the Member of Parliament for Makueni Constituency between 2002 to 2007, an advisor to former President Mwai Kibaki on constitutional, parliamentary and youth affairs, before he was elected as the first Makueni governor on Muungano.

His admirers cite his humility as among his assets while adversaries are irked by his being an unapologetic stickler to law and order among his shortcomings.

In addition, he has won the hearts of many for initiating projects among them free health care to residents and the sinking of more than 100 earth dams that have helped residents address drought and famine in the area.

CITIZEN’S GOVERNMENT
In April, Prof Kibwana’s mettle was shaken after his former Roads Executive and close ally Wambua Kawive was trounced by a political novice Joshua Kiilu in a duel for the Wiper ticket to run for MP in Kaiti Constituency.

The governor’s greatest strength, however, is found in his resolve to work directly with a network of citizens in pursuit of solutions to issues afflicting them.

His administration has created the teams known as development committees bringing together more than 35,000 residents scattered across the county and whose mandate is to spur development and promote the county government’s agenda at the grassroots.

POLITICAL RIVALS
In his enhanced powers in Wiper and in the Nasa campaigns, the governor’s shortfalls at home are shadowed by his success in rallying the Akamba to back Mr Musyoka.

The latest entry of former Kaiti MP Gideon Ndambuki (Jubilee Party) and a former East African Breweries Limited boss Benard Kiilu (Liberal Democratic Party) in the governorship race is expected to further complicate matters for Prof Kibwana in the vote rich Kaiti sub-county, which is home to the duo.

Unlike Mr Kiilu who is a newcomer, Mr Ndambuki has been Kaiti MP for two consecutive terms and in one of them, in 2002, he beat odds by retaining his seat under Kanu against Narc that swept across Ukambani.

TRAITORS
However, analysts see a united Nasa in Ukambani will easily keep Jubilee at bay.

Part of the strategy is to fight Uhuru allies in the area is expected to include blaming the government for delays in tarmacking Kibwezi-Kitui Road, building the proposed Thwake Dam, as well as the proposed Konza City in the area.

Those supporting the President’s party are also be labelled traitors of the community who are only advancing selfish interests.

Already, both Mr Masika and Mr Ndambuki have rolled out their well-oiled campaigns and have been holding public rallies across the county of 429, 709 voters.

Makueni governor walks a tightrope after move to Wiper Reviewed by samrack on May 25, 2017 .