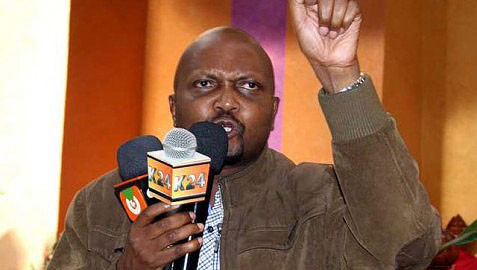 The renewed campaigns for the presidential election have once again brought out the worst in Gatundu South MP Moses Kuria.

A video streamed live on Mr Kuria’s Facebook page showed how the Gatundu South lawmaker turned his guns on Mr Odinga and spoke in extraordinarily coarse language about the former Prime Minister and his family.

Most of what he said is un-publishable and can only be paraphrased. We also can’t attach the video.

When he took the microphone from Limuru MP Peter Mwathi, Mr Kuria started by asking the crowd whether the polls had been rigged as alleged by Mr Odinga’s Nasa. The crowd, which received him quite well, said that was not the case.

“You want to tell me that the votes of eight million people were neutralized in five minutes?” Mr Kuria said.

Mr Kuria moved from criticizing Mr Odinga for challenging President Kenyatta’s re-election to outright insults and obscenities against the former Prime Minister and his family.

He also made obscene remarks about Mr Odinga’s wife and repeated the mantra spoken by Jubilee’s leaders that it would not matter if the Nasa leader’s relatives managed the fresh election.

“We gave birth to a baby. That baby did not die in the uterus or the maternity. It had come home and was even breastfeeding but he put his finger up the child’s bottom and the child then died. Would you forgive such a person?” he asked.

He also told the crowd he was ready to face action because of his remarks and asked, rhetorically: “Who were the prisons built for? Wasn’t Mandela jailed and released? I will circumcise him.”

He also took a swipe at Mr Odinga’s opposition to the October 17 poll on the basis that the coalition had not been consulted and neither have its demands been met.

Mr Odinga on Tuesday morning proposed that the elections could be held after the national examinations and said: “The exams can be pushed. There is no harm in pushing the exams by two weeks. The children are not going to die.”

The Gatundu South MP went for the obscene in reaction to this, making insensitive remarks about the misfortunes Mr Odinga’s family has suffered over the past.

Mr Kuria said that the plan is to get the 1.3 million people in the Central Kenya and Rift Valley strongholds of the Jubilee Party principals who did not vote at the last polls to turn out on October 17 and secure President Kenyatta’s re-election.

The Gatundu South MP was amongst a group of six lawmakers arrested and detained at Pangani Police Station last year over hate-speech charges and who later reconciled and pledged to preach peace.